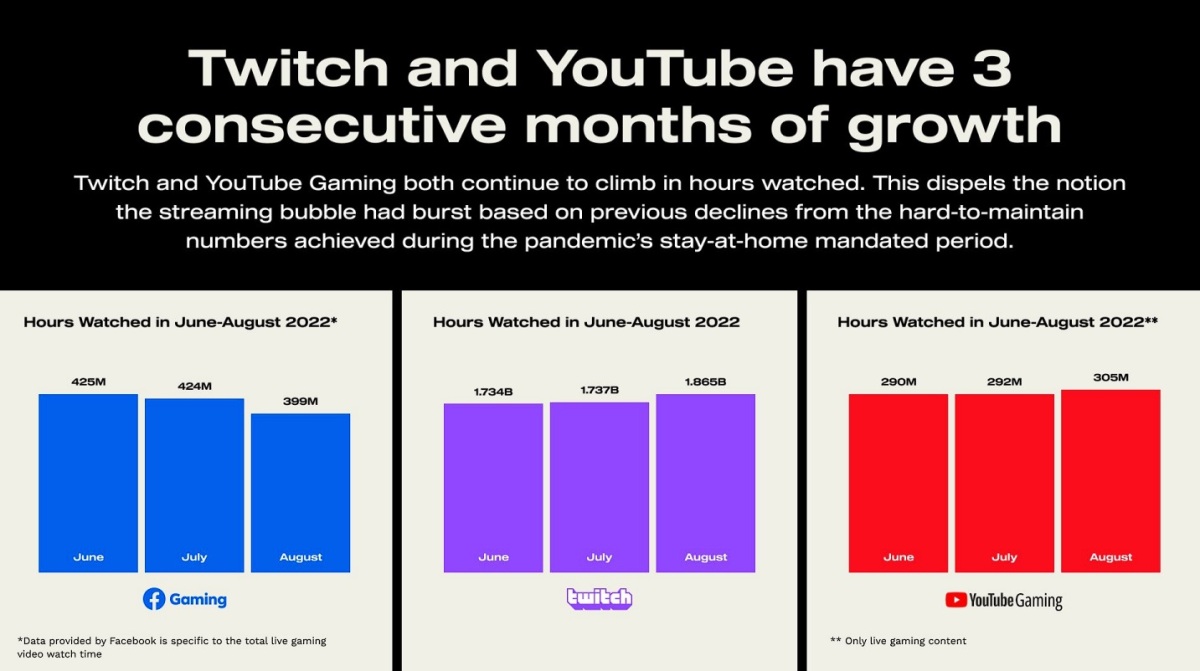 StreamElements‘ report for August shows that streaming services had a pretty boring month. That’s not unusual — the whole industry had a pretty slow month. But the two major game streaming sites showed a slight uptick in growth.

According to data from Rainmaker.gg, StreamElements’ analytics partner, both YouTube Gaming and Twitch have had three consecutive months of growth, with slightly more in August. Twitch showed 1.865 billion hours watched, while YouTube Gaming showed 305 million hours. Viewership had declined in 2022’s earlier months, especially when compared with 2020 and 2021, and StreamElements itself surmised this was in-line with a return to pre-pandemic numbers.

Gil Hirsch, StreamElements CEO, said in a statement, “Livestreaming viewership is rebounding with hours watched for both Twitch and YouTube slowly increasing these last three months. This follows several months of gradual viewership decline as pandemic mandates were lifted and the peaks achieved during that heavy quarantine period were no longer sustainable.”

As stated, the industry didn’t have a lot of activity for the month. No new games appeared on the top 10 lists for either major site, likely because few big games were released. There were a few new faces on the top streamers lists, with Kai Cenat and ElSpreen hitting the top 10 on Twitch. YouTube’s list also featured three VTubers.
GamesBeat’s creed when covering the game industry is “where passion meets business.” What does this mean? We want to tell you how the news matters to you — not just as a decision-maker at a game studio, but also as a fan of games. Whether you read our ar …