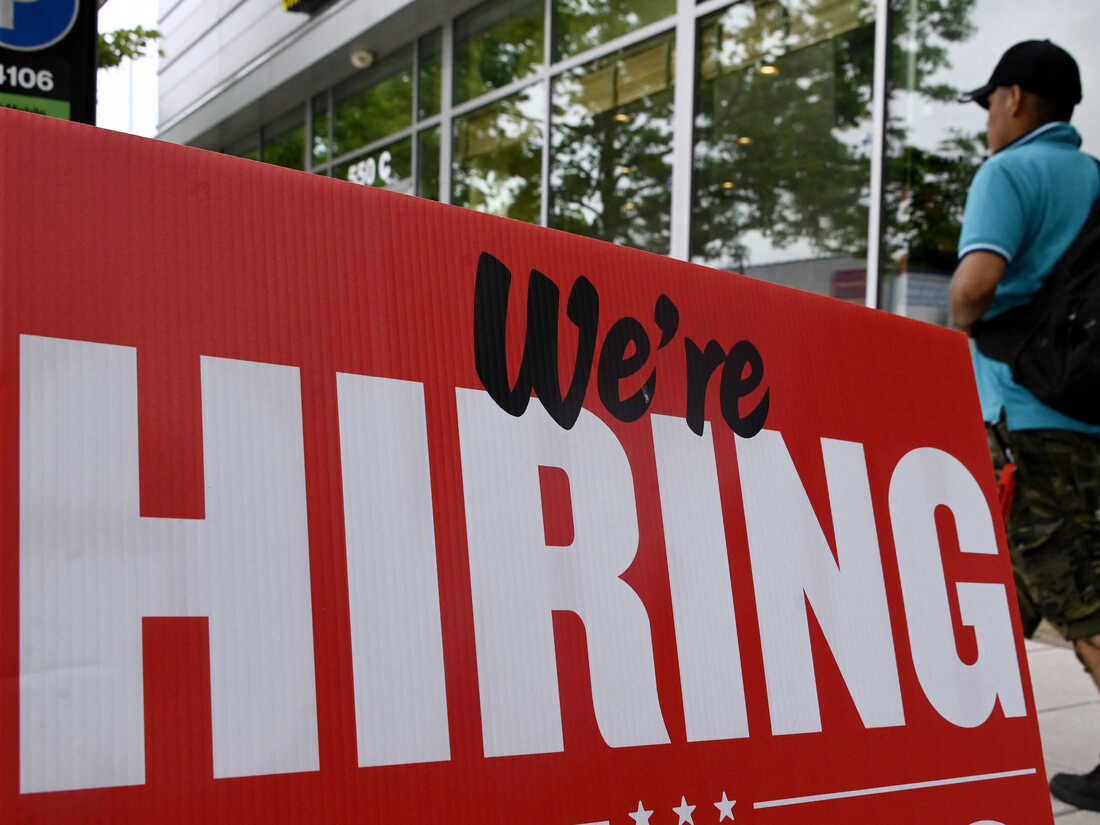 A man walks past a “now hiring” sign posted outside of a restaurant in Arlington, Va., on June 3.

The U.S. job market remains unusually hot heading into the Labor Day weekend. Employers added 315,000 jobs in August, according to a report from the Labor Department. The unemployment rate rose to 3.7% from 3.5% in July, but only because nearly 800,000 new people entered the workforce. Employment gains for June and July were revised down by a total of 107,000 jobs.
Loading…

But a strong labor market also has the potential to fuel even higher inflation at a time when businesses are already struggling to keep up with rising demand for goods and services. Prices in July were up 8.5% from a year ago. Inflation remains near a four-decade high, despite the recent drop in gasoline prices. Employers have added 3.5 million jobs so far this year, and they’re eager to add more. In July, there were nearly twice as many jobs openings as there were unemployed workers to fill them. Federal Reserve chairman Jerome Powell worries that mismatch could push wages — and eventually prices — even higher. “The labor market is particularly strong, but it is clearly out of balance, with demand for workers substantially exceeding the supply of available workers,” Powell said last week, while speaking at an economic conference in Jackson Hole, Wyo.
Loading…

The Fed is likely to take some comfort from the big influx of new workers last month. The number of people working or looking for work rose by 786,000 in August after declining in the two previous months. The share of adults in the workforce jumped to 62.4% last month from 62.1% in July, and the share of people aged 25-54 in the workforce jumped to 82.8%. The labor force is still short about 163,000 workers compared to pre-pandemic levels. The Fed is raising interest rates aggressively Average wages in August were up 5.2% from a year ago — unchanged from July. Nela Richardson, chief economist for the payroll processing company ADP, believes wage gains have begun to level off, which could ease upward pressure on prices. “Wages have jumped up but they’ve stabilized,” Richardson said. “And so, depending on your view — half empty or half full — [that] could be interpreted as good news for the future of inflation.” The Federal Reserve has been raising interest rates aggressively in an effort to tamp down demand and bring prices under control. The central bank has boosted rates by 2.25 percentage points since March. Another rate hike of 0.5 to 0.75 percentage points is expected later this month.

Higher interest rates are already taking a toll on the housing market. The average rate on a 30-year fixed mortgage has jumped to 5.66% this week, from less than 3% a year ago. Both new home construction and the sale of existing homes have slumped as a result. Construction companies added only 16,000 jobs last month, down from 24,000 in July. While a few, high-profile businesses like Bed Bath & Beyond have announced job cuts in recent days, most employers are reluctant to lay workers off, despite signs of waning economic growth. New claims for unemployment benefits — a proxy for layoffs — have fallen in each of the last three weeks, and claims remain very low by historical standards. What’s more, a preliminary estimate from the Labor Department shows job growth in the 12 months ending in March was even stronger than initially reported. The estimate, released last week, is based on a more comprehensive tally of businesses. It shows there were 462,000 more payroll jobs in March than were reported in the monthly survey. A final job count will be released early next year.
…