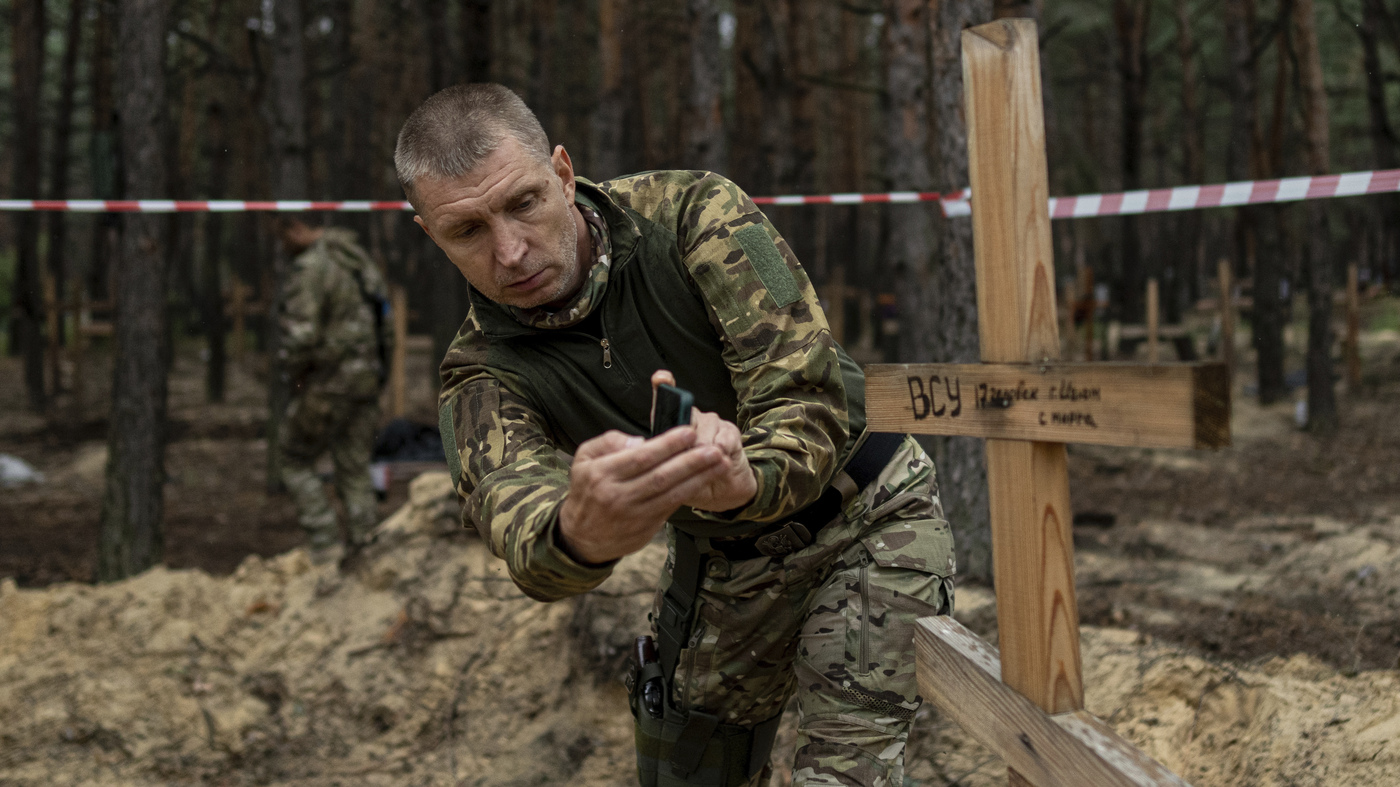 Oleg Kotenko, the commissioner for issues of missing persons under special circumstances, uses his smartphone to film the grave a Ukrainian soldier in the recently retaken area of Izium, Ukraine, Sept. 15, 2022.

Associated Press journalists saw the site Thursday in a forest outside Izium. Amid the trees were hundreds of graves with simple wooden crosses, most of them marked only with numbers. A larger grave bore a marker saying it contained the bodies of 17 Ukrainian soldiers. Investigators with metal detectors were scanning the site for any hidden explosives. Oleg Kotenko, an official with the Ukrainian ministry tasked with reintegrating occupied territories, said videos that Russian soldiers posted on social media indicated there were likely more than 17 bodies in the grave. “We haven’t counted them yet, but I think there are more than 25 or even 30,” he said. Izium resident Sergei Gorodko said that among the hundreds buried in individual graves were dozens of adults and children killed in a Russian airstrike on an apartment building.

He said he pulled some of them out of the rubble “with my own hands.” Zelenskyy invoked the names of other Ukrainian cities where authorities said retreating Russian troops left behind mass graves of civilians and evidence of possible war crimes. ” Bucha, Mariupol, now, unfortunately, Izium. … Russia leaves death everywhere. And it must be held accountable for it. The world must bring Russia to real responsibility for this war,” he said in the address.

Sergei Bolvinov, a senior investigator for Ukrainian police in the eastern Kharkiv region, told British TV broadcaster Sky News that a pit containing more than 440 bodies was discovered near Izium after Kyiv’s forces swept in. He described the grave as “one of the largest burial sites in any one liberated city.” Some of the people buried in the pit were shot. Others died from artillery fire, mines or airstrikes. Many of the bodies have not been identified yet, Bolvinov said. Russian forces left Izium and other parts of the Kharkiv region last week amid a stunning Ukrainian counteroffensive. On Wednesday, Zelenskyy made a rare trip outside the capital to watch the national flag being raised over Izium’s city hall. Deputy Interior Minister Yevhen Enin said Thursday night that other evidence found after Kyiv’s sweeping advance into the Kharkiv region included multiple “torture chambers” where both Ukrainian citizens and foreigners were detained “in completely inhuman conditions.”
“We have already come across the exhumation of individual bodies, not only with traces of a violent death, but also of torture — cut off ears, etc. This is just the beginning,” Enin said in an interview with Ukraine’s Radio NV. He claimed that among those held at one of the sites were students from an unspecified Asian country who were captured at a Russian checkpoint as they tried to leave for Ukrainian-controlled territory. Enin did not specify where the students were held, although he named the small cities of Balakliya and Volchansk as two locations where torture chambers were found. His account could not be independently verified. “All these traces of war crimes are now carefully documented by us. And we know from the experience of Bucha that …