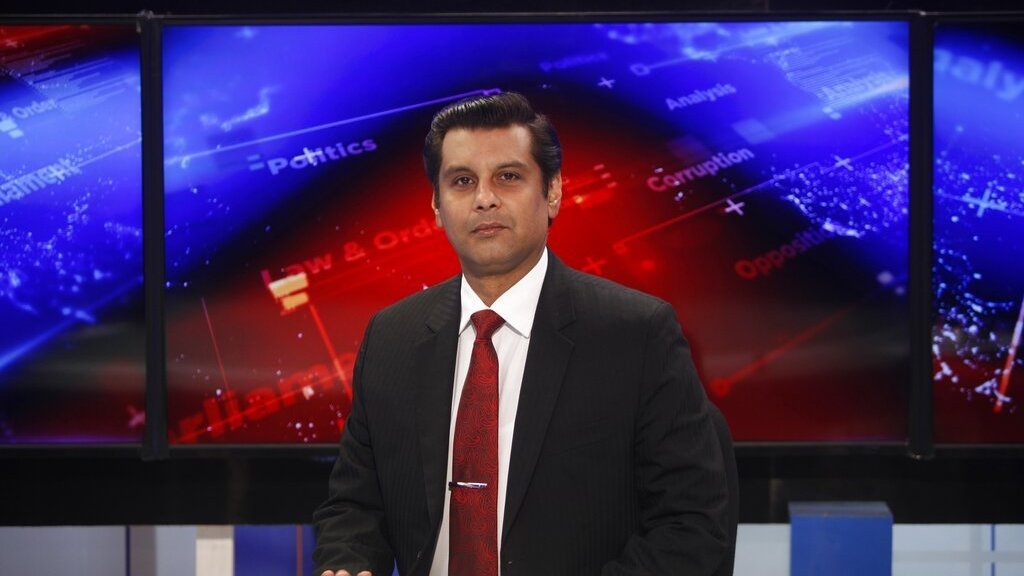 Senior Pakistani journalist Arshad Sharif poses in December 2016 for photograph prior to recoding an episode of his talk show at a studio in Islamabad.

NAIROBI, Kenya — A senior Pakistani journalist living in hiding in Kenya was shot and killed by police after the car he was in sped up instead of halting at a roadblock near Nairobi, the police said on Monday. Kenyan police expressed regret over the incident, saying it was a case of “mistaken identity” during a search for a similar car involved in a case of child abduction. Arshad Sharif, 50, left Pakistan in July to avoid arrest over criticizing the South Asian country’s powerful military. He was also a critic of the government of Prime Minister Shahbaz Sharif, who has repeatedly said he believes in freedom of the media. Nairobi police said Sharif was shot in the head and killed on Sunday night after the car he was in with his brother, Khurram Ahmed, drove through a roadblock set up on the Nairobi-Magadi highway to check vehicles along the key route. They were traveling from the town of Magadi to the Kenyan capital. The two ignored police orders to stop and sped up. “They did not stop and proceeded with the journey,” the police said. Police opened fire and laid chase, during which the car flipped over.

Sharif’s wife Javeria Siddique confirmed that her husband was killed in Kenya. His brother’s condition was not immediately known. Sharif left Pakistan in July to avoid arrest following a citizen’s complaint against him on allegations of maligning the country’s national institutions, a reference to the military. His whereabouts were not publicly known; most of his friends knew only that he had spent time in Dubai, the United Arab Emirates, and London. Nairobi police said the Independent Policing Oversight Authority will take over the case for further investigation. “We had an incident of shooting which turned (out) to be a case of mistaken identity involving a journalist. We will release more information later,” a senior Kenyan police officer said earlier, speaking on condition of anonymity because he was not authorized to speak to the media. According to police, the roadblock was set up to find and intercept a car similar to Sharif’s following a carjacking in the Pangani area of Nairobi, where a child was taken hostage. Pakistani President Arif Alvi, Prime Minister Sharif, who is not related to the slain journalist, the country’s military and other senior officials in Pakistan expressed their condolences. A month after he left Pakistan, the private ARY Television fired Arshad Sharif, saying he had repeatedly criticized the military on social media in violation of the TV station’s policy. His talk show POWERPLAY, which aired on Mondays and Thursdays, was discontinued.
The station had earlier in the year remained critical of Pakistan’s prime minister following the ouster of his predecessor, Imran Khan, in a no-confidence in the parliament in April. Khan claims he was ousted under a U.S. plot, a charge both Washington and the Pakistani government deny.

On Monday, Khan’s Tehreek-e-Insaf party and its senior leaders, including Fawad Chaudhry, condemned Sharif’s killing and demanded a detailed investigation. Khan also visited Sharif’s residence in Islamabad to express his condolences to the family. Later Monday, dozens of journalists rallied in Islamabad over the killing and demanded justice for Sharif. In another statement, Kenyan police expressed regret and offered condolences to the journalist’s family. A court in Islamabad in August asked Pakistan’s intelligence agency and police to stop harassing Sharif after the journalist, through his lawyer, petitioned the court, saying his fundamental rights were being violated by security forces. Police and the government at the time confirmed that Sharif is being sought in a complaint case but said no action had been carried out to arrest Sharif. Pakistan has long been an unsafe country for journalists. In 2020, it …