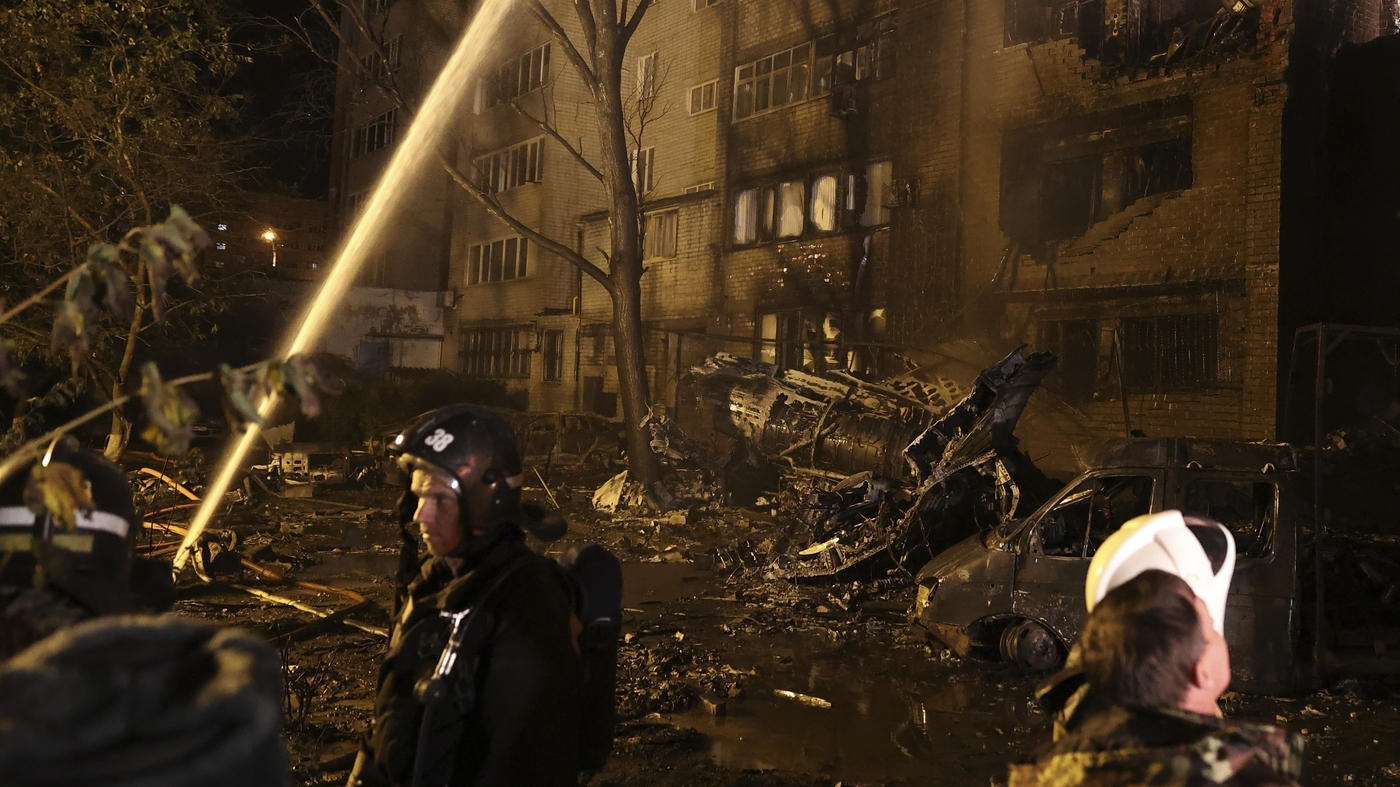 Firefighters work at the scene after a warplane crashed into a residential area in Yeysk, Russia, Monday, Oct. 17, 2022.

MOSCOW — A Russian warplane crashed Monday into a residential area in a Russian city on the Sea of Azov after suffering engine failure, leaving at least 13 people dead, three of whom died when they jumped from upper floors of a nine-story apartment building to escape a massive blaze. A Su-34 bomber came down in the port city of Yeysk after one of its engines caught fire during takeoff for a training mission, the Russian Defense Ministry said. It said both crew members bailed out safely, but the plane crashed into a residential area, causing a fire as tons of fuel exploded on impact. After hours of combing through the charred debris of the building, authorities said 13 residents, including three children, were found dead. Another 19 were hospitalized with injuries. Vice governor of the region, Anna Menkova, said three of the four victims died when they jumped from the upper floors of the building in a desperate attempt to escape the flames, according to the RIA-Novosti news agency. The authorities reserved emergency rooms at local hospitals and scrambled medical aircraft. Over 500 residents were evacuated and provided with temporary accommodations.

The Kremlin said Russian President Vladimir Putin was informed about the crash and dispatched the ministers of health and emergencies along with the local governor to the site. Yeysk, a city of 90,000, is home to a big Russian air base. Surveillance cam videos posted on Russian messaging app channels showed a plane exploding in a giant fireball. Other videos showed an apartment building engulfed by flames and loud bangs from the apparent detonation of the warplane’s weapons. The Su-34 is a supersonic twin-engine bomber equipped with sophisticated sensors and weapons that has been a key strike component of the Russian air force. The aircraft has seen wide use during the war in Syria and the fighting in Ukraine. Monday’s accident marked the 10th reported non-combat crash of a Russian warplane since Moscow sent its troops into Ukraine on Feb. 24. Military experts have noted that as the number of Russian military flights increased sharply during the fighting, so did the crashes.
…