After the Crimean bridge attack, there are plenty of theories but few real answers 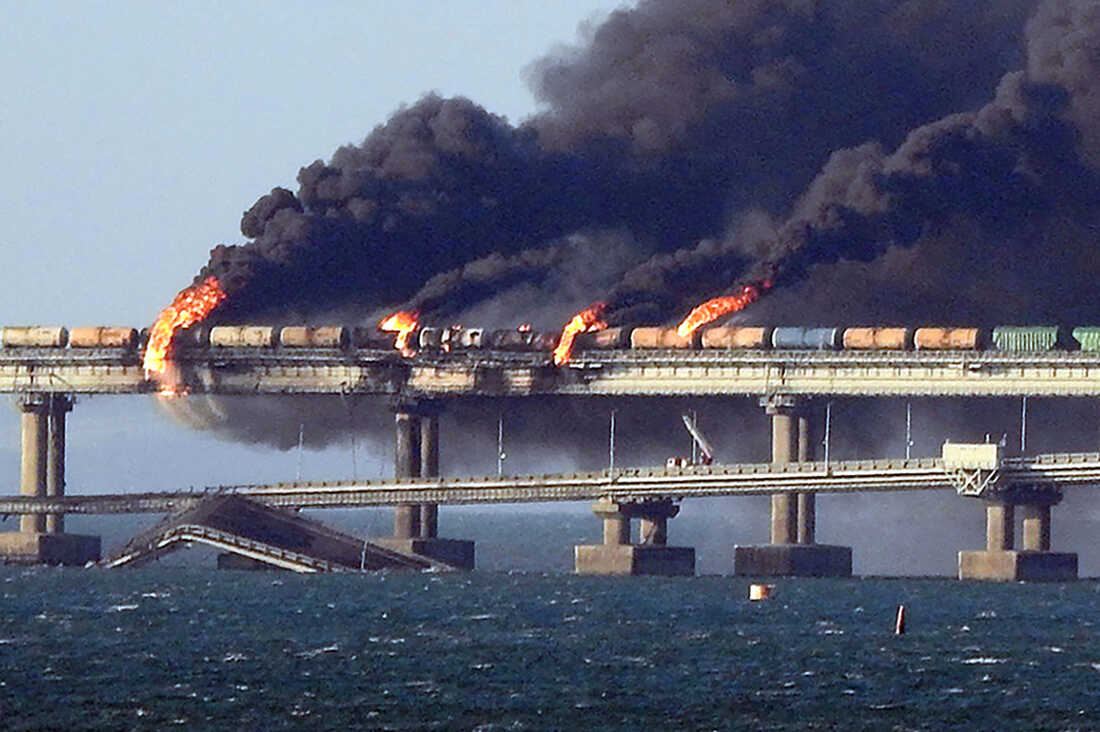 Black smoke billows from a fire on the Kerch bridge that links Crimea to Russia after an explosion on Saturday.

KYIV, Ukraine — Nearly a week after an explosion damaged a vital bridge in Crimea, Russian and Ukrainian authorities are still trading accusations and offering competing theories as to what and who caused the blast. But definitive answers remain elusive. On Wednesday, Russia’s Federal Security Service arrested eight men alleged to have taken part in an elaborate scheme to destroy the Crimean bridge. Investigators said Ukrainians, Russians and an Armenian camouflaged tons of explosives and shipped them to several countries before Saturday’s attack. Russia says a driver with no previous connections to terrorism drove a truck bomb onto the bridge at a time to maximize damage. But Mykhailo Podolyak, a top adviser to Ukrainian President Volodymyr Zelenskyy, says Ukrainian intelligence believes that Russian forces planned the attack as a pretense to escalate the war in Ukraine. “The Crimea bridge incident gives the Russian military a convenient alibi for all of its defeats in southern Ukraine,” Podolyak told Ukraine’s national broadcaster. Many theories, but little certainty Credible theories abound in Ukraine and abroad about who is responsible for the Oct. 8 attack and how they did it. But, says Andrew Barr, an impact dynamics researcher at the University of Sheffield, “Despite all of the publicly available photos and videos, it’s quite difficult to be certain about this.”

New photos posted on social media Wednesday show bent support beams on the Russia-bound lanes as well. That side of the bridge reopened to traffic only hours after the blast. Nick Waters, an analyst with the digital forensics firm Bellingcat, points out that the bridge’s underside shows barely any blast damage, dismissing a popular Ukrainian theory that a special naval operation destroyed the bridge from below. Unlike the bridge’s unscathed bottom, satellite images released by Maxar Technologies show a blackened road top. Soon after the explosion, Ukrainian experts quickly dismissed the notion that a Ukrainian missile had targeted the bridge, citing the 180-mile distance from Ukrainian-held territory as a technical limitation. The United States and other countries that supply weapons to Ukraine have refused to provide missiles that travel that far.

FSB published a video of an “examination of the truck” and its “X-ray”, which allegedly shows explosives.Where on the “x-ray” another axle with wheels and a frame disappeared, the FSB does not specify 🤡 pic.twitter.com/onKbOndxVO— Ukrainska Pravda in English (@pravda_eng) October 12, 2022

After Russian state media posted the government’s evidence for a truck bomb — the alleged truck involved and a X-ray scan of its cargo — Ukrainian journalists pointed out that the two images showed different trucks. Still, some military experts believe that a truck bomb is the likely culprit, even if those responsible for it are harder to determine. “The damage is definitely consistent with an explosion in the center of a bridge span, as anything else would have caused damage to the pier,” says Barr, who specializes in analyzing blast damage in war zones.

A few people have asked why this satellite image of the #CrimeanBridge shows so many damaged sections from a single explosion, so here’s a brief Bridges 101 on the likely failure mechanism. 🧵 https://t.co/MMyxXjbrrB pic.twitter.com/6LOGHNHP1h— Andrew Barr (@andrew_barr) October 9, 2022

He says the Crimean bridge is designed to have a single section of road floating above several piers and detached from other sections. When one span falls into the water, it pulls several other spans with it. Based on the ways the flames repeatedly shot out from the blast site, Barr also suggests that the truck was loaded with specialized compounds that burned hot enough to ignite a passing fuel train traveling on a parallel rail bridge, severely weakening it.
Mika Tyry, a retired military demolition specialist, told YLE, Finland’s national broadcaster, that the flames and sparks are consistent with a thermite bomb. Russia’s mi …