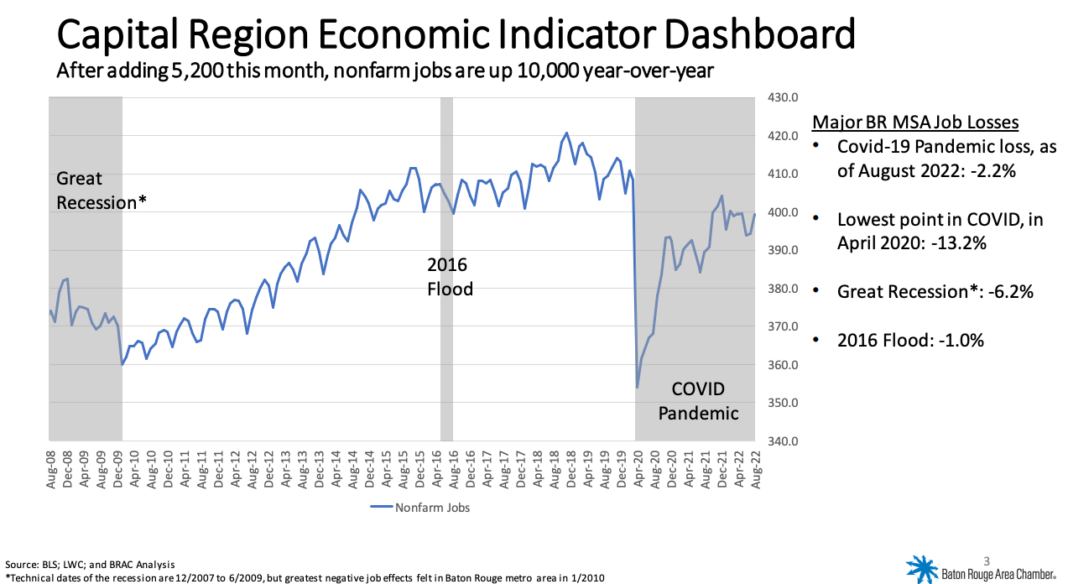 Baton Rouge added 5,200 jobs in August, and jobs are up 10,000 year over year for the Capital Region. However, government hiring drove 70% of those new jobs, with education and health care making up another 14% of job gains, according to the latest economic indicators report from the Baton Rouge Area Chamber.
“Even before the pandemic, there was significant demand for health care workers, and even now the demand persists. Three of the top ten posted jobs in the Capital Region are health-related, and health care is the industry with the second highest number of job postings—nearly 2,300 were posted in September alone,” says Andrew Fitzgerald, senior vice president of business intelligence for BRAC, in a prepared statement. “The good news is that local higher education institutions appear to be meeting the moment; for example, Baton Rouge Community College currently has nearly 2,800 students studying in the field of health services, most of them in some sort of nursing.”
Key findings from this month’s dashboard include:

Baton Rouge added 5,200 jobs in August; jobs are up 10,000 year-over-year;
Compared to peer metros, Baton Rouge has had the highest rate of job growth over the last two months;
The Capital Region’s unemployment rate fell to 3.4% this month, and it’s been below 4% for much of the past year;
Reduced workplace travel in Baton Rouge aligns with the national average;