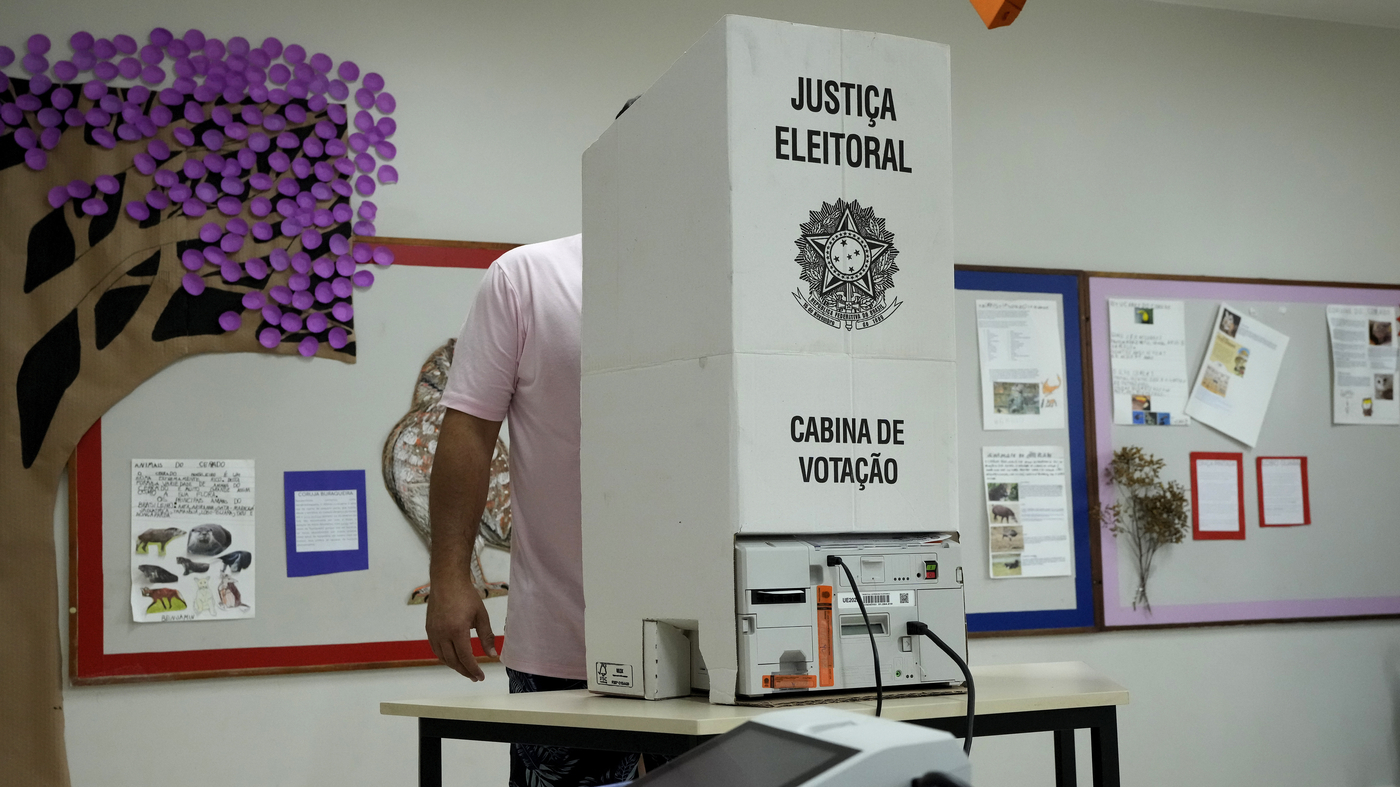 An electoral worker installs an electronic voting machine at a polling station in preparation for the presidential run-off election, in Brasilia, Brazil, Saturday, Oct. 29, 2022.

RIO DE JANEIRO — Brazilians vote Sunday in a polarizing presidential runoff election that pits an incumbent vowing to safeguard conservative Christian values against a former president promising to return the country to a more prosperous past. The runoff shaped up as a close contest between President Jair Bolsonaro and his political nemesis, former President Luiz Inácio Lula da Silva. Both are well-known, divisive political figures who stir passion as much as loathing. The vote will determine if the world’s fourth-largest democracy stays the same course of far-right politics or returns a leftist to the top job — and, in the latter case, whether Bolsonaro will accept defeat.

More than 120 million Brazilians are expected to cast ballots, but because the vote is conducted electronically, the final result is usually available within hours after voting stations close in late afternoon. Most opinion polls gave a lead to da Silva, universally known as Lula, though political analysts agreed the race grew increasingly tight in recent weeks. For months, it appeared that da Silva was headed for easy victory as he kindled nostalgia for his 2003-2010 presidency, when Brazil’s economy was booming and welfare helped tens of millions join the middle class.

But in the Oct. 2 first-round elections, da Silva finished first among the 11 candidates with 48% of the votes, while Bolsonaro was second at 43%, showing opinion polls significantly underestimated the president’s popularity. Many Brazilians support Bolsonaro’s defense of conservative social values and he has shored up support with vast government spending. Candidates in Brazil who finish ahead in the first round tend to win the runoff. But political scientist Rodrigo Prando said this campaign is so atypical that a Bolsonaro win could not be ruled out. The president secured endorsements from governors of the three most populous states, and allied politicians scored big wins in congressional races. “Politically, Bolsonaro is stronger than had been imagined,” said Prando, a professor at Mackenzie Presbyterian University in Sao Paulo. “Mathematically, Lula is in front.” Twelve gubernatorial races will also be decided, among them Brazil’s most populous state, Sao Paulo, Amazonas state and northeastern Bahia state. More than 150 million Brazilians are eligible to vote, yet about 20% of the electorate abstained in the first round. The Supreme Court has issued a ruling enabling state capitals to provide free public transport on election day, and both da Silva and Bolsonaro have focused efforts on driving turnout. The candidates presented few proposals for the country’s future beyond affirming they will continue a big welfare program for the poor, despite very limited fiscal room going forward. They railed against one another and launched online smear campaigns — with considerably more attacks coming from Bolsonaro’s camp.
His four years in office have been marked by proclaimed conservatism and defense of traditional Christian values. He claimed without any evidence that da Silva’s return to power would usher in communism, legalized drugs, abortion and the persecution of churches. Da Silva homed in on Bolsonaro’s widely criticized handling of the COVID-19 pandemic and said the president failed to care for society’s neediest members. And he painted Bolsonaro as an opponent of the Amazon rainforest, given that he defanged environmental authorities and presided over a surge in deforestation. In campaign videos, da Silva also took aim at Bolsonaro for being behind a policy directing billions to lawmakers for pet projects in exchange for political support. It is referred to as the “secret budget,” due to a lack of transparency around the money’s final uses, and da Silva said it depleted funds for key social spending. But for many, the record of da Silva’s Workers’ Party is equally off-putting. A sprawling investigation …