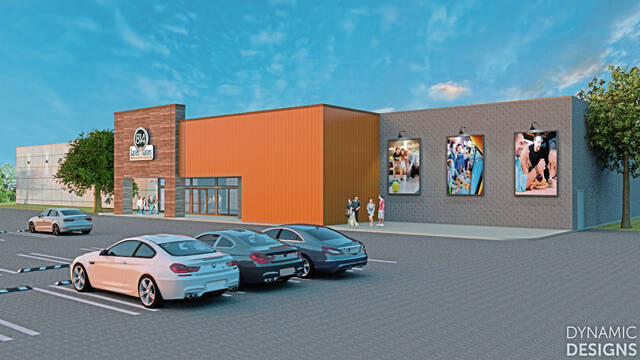 Brothers Bobby and Chris Hogue are in the middle of designing a new entertainment venue at a former Hempfield grocery store, but they already know there’s nothing quite like it in the region.
814 Lanes & Games is set to open next year at the former Shop ’n Save building along Route 136, bringing up to 100 jobs to the area. The facility will feature bowling, ax throwing, sport simulators, laser tag, an escape room, a high ropes course, more than 50 arcade games, a restaurant and a bar.
“It’s just a great community,” said Bobby Hogue. “I actually live in Penn Township so we do all of our eating and family entertainment in Greensburg and there’s not a lot in the Hempfield area that would encompass the magnitude of what we’re doing.”
Once completed, the Hempfield location will be the second 814 Lanes & Games. Hogue and his brother opened a similar location in Johnstown in 2021. The name for that original site is a nod to Johnstown’s 814 area code.
Plans for the roughly 44,000-square-foot center show the former Hempfield grocery store transformed to feature 20 bowling lanes, six of which will be in a private VIP area. There will also be four ax-throwing lanes and sport simulators with golf, soccer, football and dodgeball games.
A 3,000-square-foot laser tag arena will be designed by Indiana-based Creative Works. Equipment will be purchased from LaserBlast of Michigan.
The escape room wi …