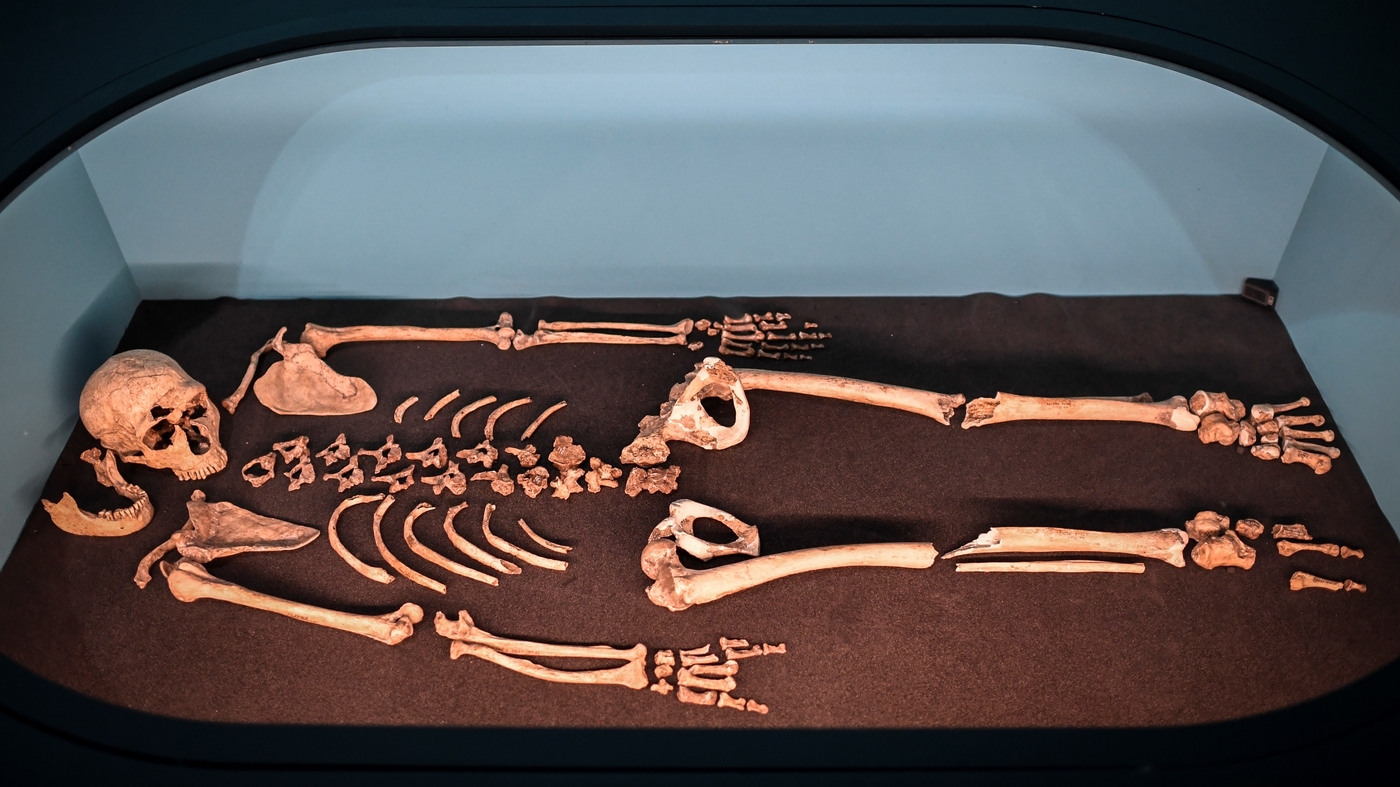 A Neanderthal skeleton on display in 2018 at the Musee de l’Homme in Paris. Researchers extracted DNA from bones found in Russia to learn more about how their communities were organized.

One of the things that makes us special as a species is our ability to build communities, but we humans have not always been alone in that regard. A new study sheds light on how Neanderthals built clans of their own. Neanderthals are distant cousins of humans that lived between 430,000 and 40,000 years ago. They get a bad rap as cave-dwelling thugs with clubs, but Laurits Skov, a paleogenticist at the Max Planck Institute for Evolutionary Anthropology in Leipzig, Germany, says that you really need to get that picture out of your head.

“You know, this image of Neanderthals being brutes, is not quite accurate,” he says. “The more we learn about them, the more like humans they appear to be.” That human connection is further bolstered by Skov and his colleagues’ latest findings, which were published this week in the journal Nature. The group looked at genetic material taken from Neanderthal bones and teeth from two caves in central Russia. The caves’ residents are believed to have lived around 55,000 years ago. They extracted the DNA by drilling tiny holes in the ancient remains. It was a delicate operation.

“One drop of my sweat would outweigh the Neanderthal DNA molecules a million to one or something like that, so you’ve got to be really careful,” Skov says. And it didn’t always work: sometimes the DNA couldn’t be found; sometimes, a bone had been chewed by a prehistoric hyena, contaminating it. But Skov and his colleagues were eventually able to extract the genetic codes of 13 Neanderthals living in the cave, including several who were related: A father and his teenage daughter, as well as a boy around the age of 10 who was related to a woman in the cave. (That “second-degree” relationship is a little more fuzzy, Skov says: “They could for instance be cousins, they could be grandparent/grandchild, they could be aunt/nephew, all those kinds of things.”). It’s the first time that Neanderthal relatives have been sequenced side-by-side. Skov says that the DNA of the individuals living in the cave also provides some clues about how the society might have been organized. By looking at mitochondrial DNA, which is only passed along by females, and Y chromosomes, which come from males, Skov and his colleagues were able to determine that the women were more likely to have come from outside the group. In other words, Neanderthal society may have been organized in a way where women moved to be with the family of the men.
Lara Cassidy of Trinity College in Dublin, Ireland says that the new finding is important because it’s the first time Neanderthals living at the same time have been sequenced together. “That is really exciting because what we have is a community, and we can start to understand a bit about how these communities worked,” she says. Cassidy, who was not a researcher on this study, cautions that the findings are limited by the small number of Neanderthals sampled. There’s no way to know, for example, whether women moved between all groups of Neanderthals, or whether that was something unique to this clan. And she’d like to know more about what ties the other people in the cave together. Humans for example, build social groups of unrelated friends and companions. “We seem to be able to put ourselves together in all sorts of configurations,” she says. “It would be nice to know if Neanderthals were as flexible.” The genetic data isn’t quite good enough to see if everyone in the cave is distantly related, or in-laws, or just friends. Skov says he is still working to get a clearer picture. There’s one more mystery: How did the father and daughter, and the boy and his relative die? Skov says there aren’t any clear clues, but he suspects starvation may have played a role. “Life back then was rough, they survived by hunting bison,” he says. “You can imagine if, in one year, they don’t manage to hunt and catch all they need… Something …