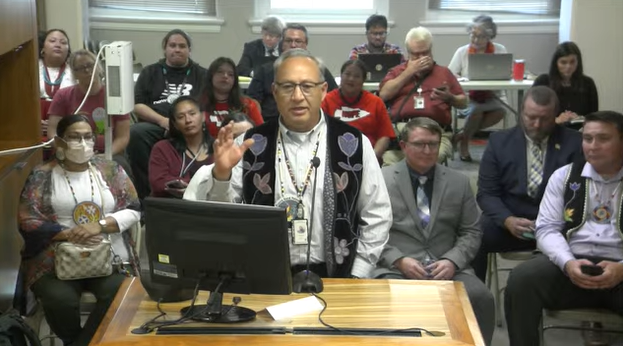 TOPEKA — Haskell Indian Nations University freshman Georgia Blackwood said indigenous-themed imagery and branding presented in the form of school mascots made her feel non-Native Americans were intent on treating her culture with disrespect.
Blackwood, a Lawrence resident and member of the Kickapoo Tribe in Kansas, told members of the Kansas State Board of Education on Tuesday perpetuation of offensive team names or mascots created a hostile educational environment in schools.
She endorsed a Kansas Advisory Council for Indigenous Education recommendation the state Board of Education and the Kansas Board of Regents make a priority of working to convince local school officials to abandon culturally inappropriate branding. The council report suggested the transition be completed within three to five years.
“Blatantly racist depictions let me know that my opinions aren’t valid and what I have to say is not being taken into consideration,” Blackwood said.
Five state Board of Education members expressed during the meeting a degree of support for a resolution or motion expected to be on the November agenda that would denounce this type of imagery. A list of school mascots in Kansas considered improper included Braves, Red Raiders, Warriors, Thunderbirds, Indians and Redskins.
A challenge in terms of the state’s public schools was that Kansas’ 10-member state Board …