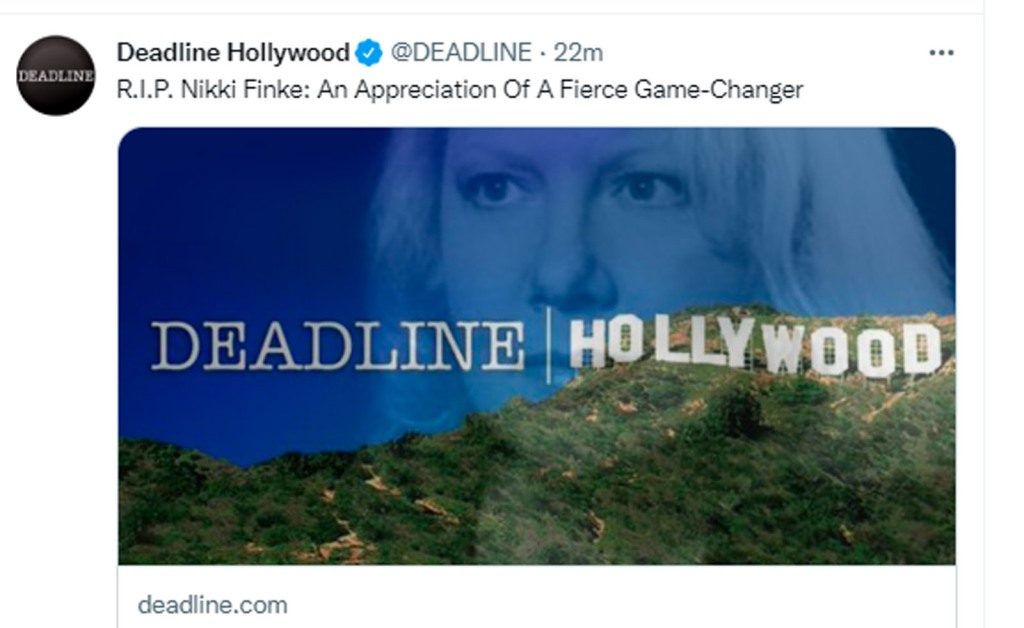 Nikki Finke, the veteran journalist known for her sharp take on the entertainment industry, died Sunday, Oct. 9 at the age of 68.Finke founded the trade publication Deadline in 2006, which reported her death. She died in Boca Raton, Florida, after a prolonged illness.
“At her best, Nikki Finke embodied the spirit of journalism, and was never afraid to tell the hard truths with an incisive style and an enigmatic spark. She was brash and true,” said Jay Penkse, founder, chairman and CEO of Penske Media Corporation, which purchased Finke’s blog in 2009.
“It was never easy with Nikki, but she will always remain one of the most memorable people in my life,” Penske added.

Finke worked as a foreign correspondent for The Associated Press in Moscow and London, as a Newsweek correspondent in Los Angeles and Washington, D.C., as a Los Angeles Times staff writer covering entertainment and features, and as West Coast editor and Hollywood columnist for the New York Observer and New York Magazine.
She started her “Deadline Hollywood” column for the LA Weekly in 2002, and later launched Deadline Hollywood Daily in March 2006.
“I needed a quicker way to report breaking entertainment news than my weekly newspaper column. So I bought the URL DeadlineHollywoodDaily.com for 14 bucks and change,” she wrote in 2016. “And today, under Penske Media ownership, is a website worth $100+ million.”
She also hosted a show on public radio in Southern California.
Finke was known for her take-no-prisoners approach in her gossip c …