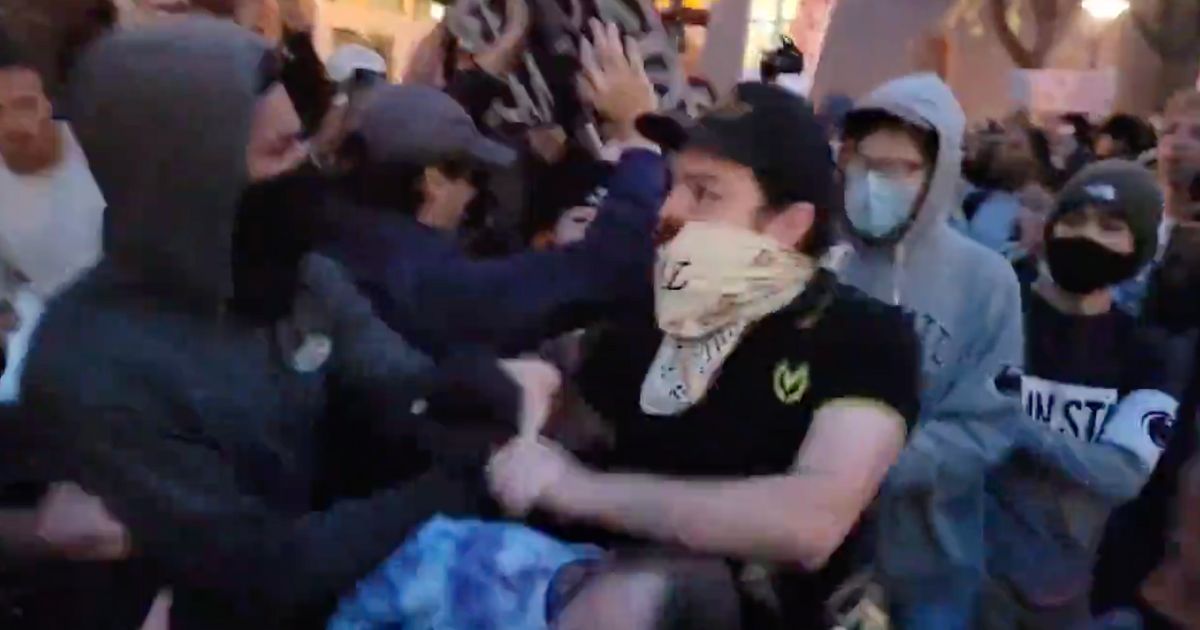 A Pennsylvania State University event featuring Proud Boys founder Gavin McInnes was canceled Monday night after McInnes’ supporters attacked students and members of the media.In the hours leading up to the event — titled “Stand Back & Stand By” and featuring the bigoted gang leader and far-right troll Alex Stein — the Proud Boys and their allies attacked a throng of protesting students and journalists gathered outside the venue. One person, described as a member of the Proud Boys, pepper-sprayed the crowd. Another video shows a Proud Boy fist-fighting with a crowd of protesters.AdvertisementFor weeks, students had been petitioning university administration to cancel the event due to safety concerns. McInnes has a documented history of bringing members of his violent street gang to speaking engagements, where they attack students and protesters.But Penn State administrators allowed the event to continue on the grounds of constitutionally protected speech. Student Affairs Vice President Damon Sims told HuffPost earlier this month that the administration had weighed student safety against campus speech concerns.“Our commitment to both freedom of expression and the welfare of our community are equally strong, despite the obvious challenges that brings,” he said at the time.Fights broke out Monday almost as soon as a planned student protest of the event began. Images on social media show journalists and students reeling from being hit with pepper spray.AdvertisementBobby, a student at Penn State, was hit with Pepper Spray moments ago, allegedly by a individual with a group of proud boys. The group has moved away from the entrances for the moment and is chanting between the Thomas building and Huck Life Sciences building pic.twitter.com/Nw4ZWcYFLS— Pete Kurtz-Glovas 🎃 (@PeteKurtzGlovas) October 24, 2022

Police from multiple jurisdictions — many in body armor and mounted on horses — were criticized by reporters at the scene for failing to intervene. “Got pepper-sprayed by a Proud Boy. Several other media got direct hit,” tweeted photojournalist Zach Roberts. “My face and body is burning like the worst sunburn. Penn State campus cops watched and did nothing.”In a statement Tuesday, Penn State President Neeli Bendapudi decried Stein and McInnes for bringing violence to campus, but also accused protesting students of giving the pair “visibility.”“Tonight, Stein and McInnes will celebrate a victory for being canceled, when in actuality, they contributed to the very violence that compromised their ability to speak,” Bendapudi wrote. “Tonight, counter-protestors also will celebrate a victory that they forced the University to cancel this event, when in actuality they have furthered the visibility of the very cause they oppose.”AdvertisementShe added: “Thankfully, it appears that no one was seriously injured in today’s event.”Since h was unable to get inside Inna timely fashion it seems like this Penn State Proud Boy decided it was swinging time. As he worked through the crowd he shoved several people, upsetting crowd further. pic.twitter.com/EGMOvMxpuT— Wayward.streamer (@StreamerWayward) October 25, 2022

For students, Bendapudi’s statement represents an about-face from the administration, which previously banned neo-Nazi leader Richard Spencer following his involvement in the deadly Unite the Right rallies in Charlottesville, Virginia, in 2017. Administrators released a statement at the time, declaring that Spencer wasn’t allowed to speak on campus due to the threat of violence he and his allies posed to students.“[Penn State] fully supports the right of free speech and encourages its expr …