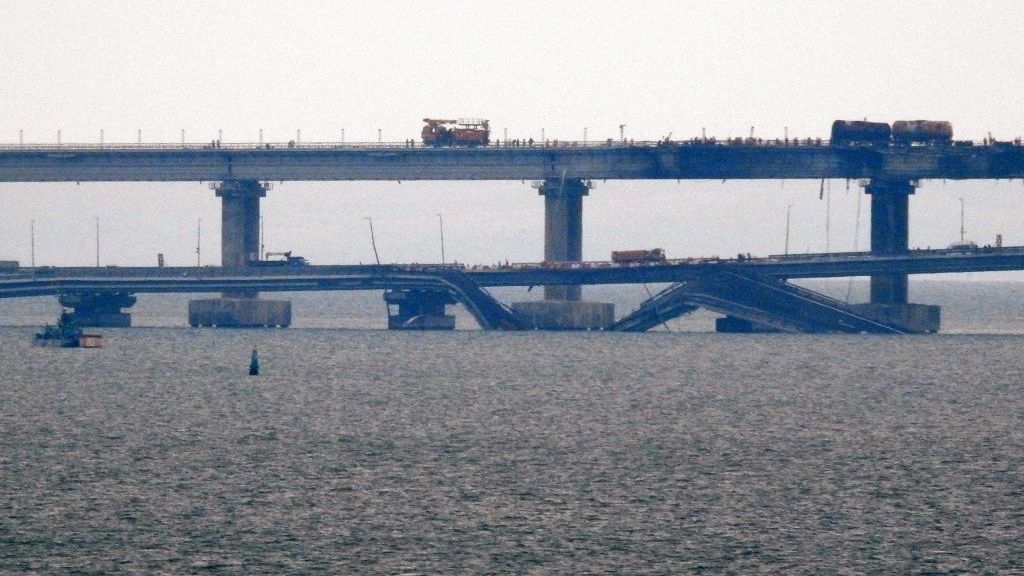 Workers restore the railway tracks Sunday on the Kerch bridge that links Crimea to Russia, a day after it was damaged by a blast. Officials said car and train traffic had resumed over the bridge, with Moscow’s transport ministry saying Sunday that long-distance passenger trains from Crimea to Russia were “moving according to the standard schedule.”

Russia says it has detained eight people it suspects in carrying out last Saturday’s explosion on a key bridge linking annexed Crimea to Russia. According to Russia’s Federal Security Service, the FSB, its agents arrested five Russian citizens as well as two Ukrainians and an Armenian national suspected in the bridge blast.

In a statement, the FSB said the individuals helped load 22 tons of explosives into a truck in the Ukrainian city of Odesa. The vehicle then went through several other countries before entering Russia and exploding on the Kerch bridge Saturday morning, killing several people and briefly rendering the bridge unusable.

Russian President Vladimir Putin has blamed Ukraine’s intelligence services for carrying out what he has called a terrorist attack. The Kremlin leader has responded with a massive series of Russian airstrikes across Ukraine that began Monday — the largest wave since the earliest days of the invasion.

Many Ukrainian officials celebrated the attack on the Kerch bridge, but others have suggested it might have been an inside job. An image of a blood-stained Ukrainian ID card allegedly belonging to one of the suspects circulated on Russian social media, but it was rife with typos and inconsistencies. Ukraine’s security services called suggestions of Ukrainian involvement “all fake, and in the service of Putin.”