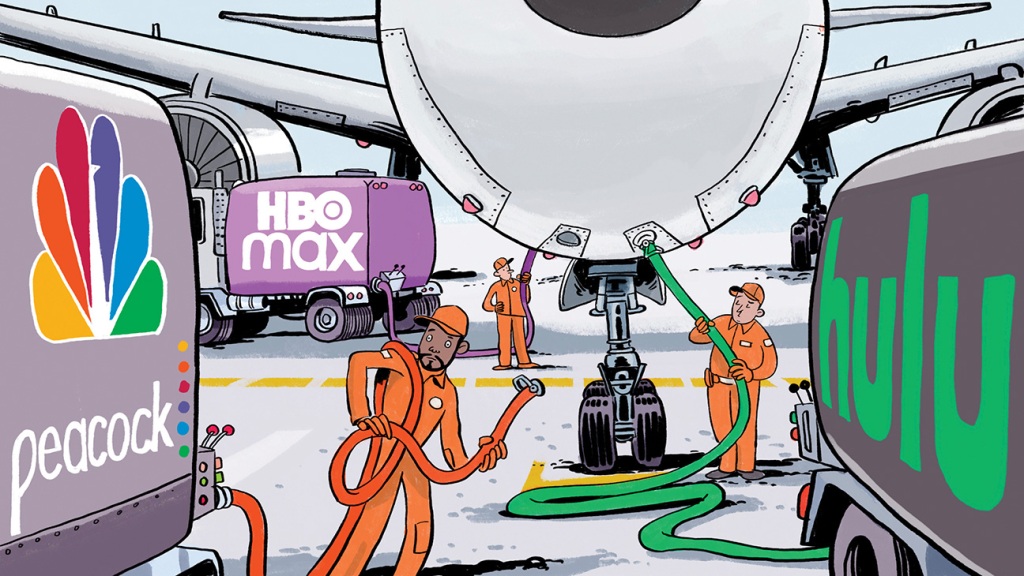 In 1921, Aeromarine Airways projected the promotional short Howdy Chicago onto a screen in the front of the cabin while flying over the Windy City, marking the first in-flight film. Cut to 100 years later, and onboard entertainment has had quite the revolution: It’s now a $250 million- to $300 million-a-year industry, according to Joe Leader, CEO of the Airline Passenger Experience Association — a network of the world’s leading airlines and suppliers — and has expanded to include films, TV, music and podcasts. In the past few years, streamers, starting with Netflix and followed by HBO Max, Hulu, Disney+ and Peacock, have continued to evolve the space, offering original content on seatback screens across the globe in addition to the classic mix of new and old theatrical releases.

Taking to the skies gives streamers a unique marketing opportunity: a captive — and likely affluent — audience of consumers who probably can afford streaming subscriptions, too. “We have passenger eyeballs for four to eight hours at a time,” says Josh Marks, CEO of onboard entertainment provider Anuvu. “If you want to hook subscribers on that new series, you’re not going to get a better marketing point than an airline.” According to the Bureau of Transportation Statistics, U.S. airlines carried 674 million passengers in 2021.

In-flight entertainment (IFE) offerings are generally programmed 90 days in advance, and with new tech, airlines can change them more easily. “[We used to rely] on what we jokingly called ‘sneakernet,’ someone coming onto the aircraft with the dongle connecting over USB and loading everything for the month,” says Leader, adding that it took about a week to update an entire fleet. “The airlines can now load the content over Wi-Fi.”

While planes can now hold lots of content on their physical servers (versus only a handful of films 15 or 20 years ago), it’s still not unlimited, resulting in a capped number of spots. Post-COVID budgets also are restricting, as the IFE industry …