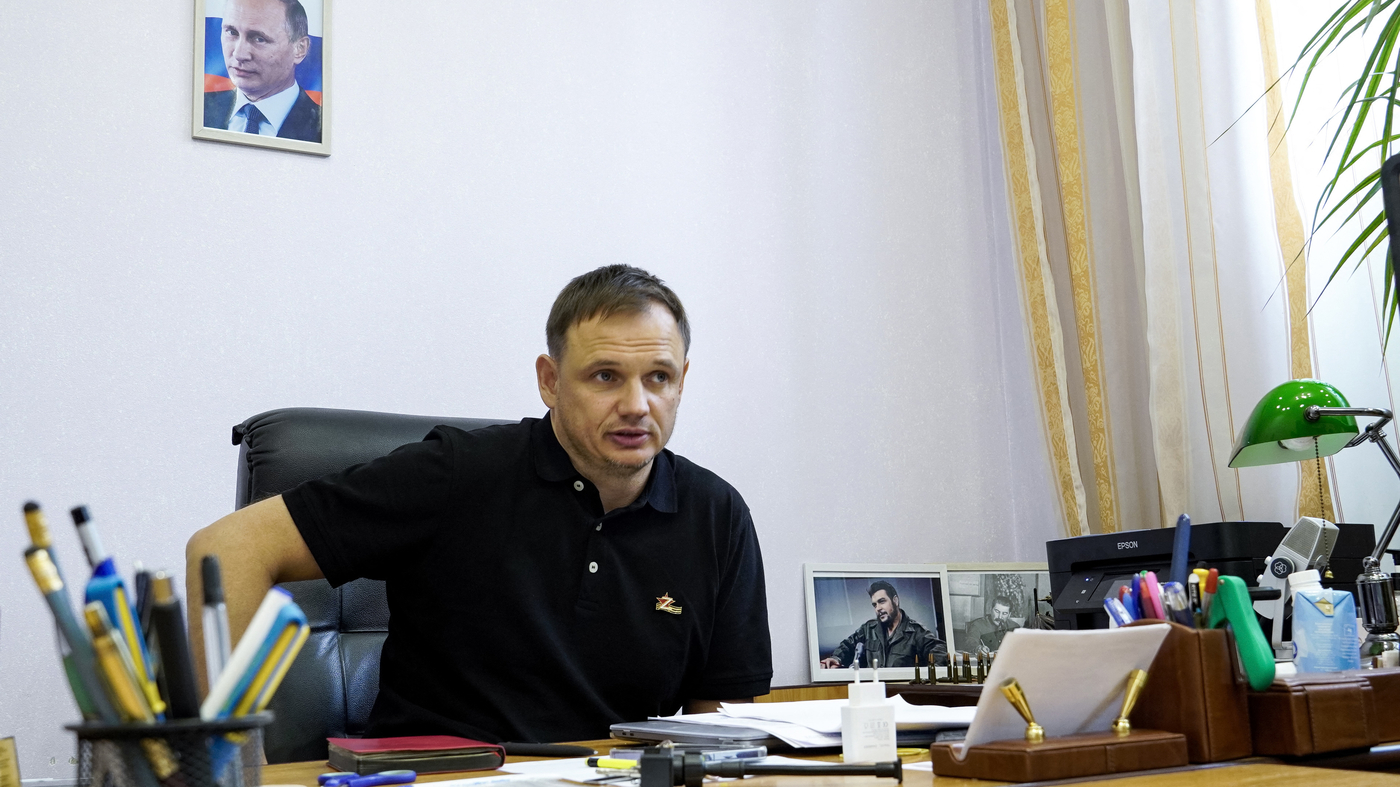 Kirill Stremousov, deputy head of the Russian-backed Kherson administration, in his office in Kherson on July 20. A portrait of Russian President Vladimir Putin is on the wall behind him.

Kirill Stremousov, the public face of the Russian occupation of Ukraine’s Kherson region, has died in a car accident, according to the collaborationist government there. The region’s Moscow-installed administration head, Vladimir Saldo, announced the death Wednesday on the Telegram social media app, calling Stremousov, his acting deputy governor and occupation spokesman, “one of the brightest.” There were no further details about the reported death. Stremousov, Ukrainian by birth, was a 45-year-old pro-Russian propagandist known for posting voluminous videos — often from his car. “The ‘Ukronazis,’ pushed by their American masters, are forced to face certain death,” he said in one recent video, repeating Moscow’s false claims that Ukraine is run by U.S.-backed Nazis. Stremousov insisted that Russia’s victory was inevitable, but that has become more difficult to sell in recent weeks as Russia suffered more defeats in the region. On Wednesday, Moscow announced it was pulling troops out of Kherson city, but the Ukrainian government said it saw no signs Russian forces were leaving without a fight. Kherson is a strategically and symbolically important regional center that fell relatively easily to the Russians early in the war.

Stremousov had a colorful, eccentric past. In a video he posted on YouTube in 2017, he holds his infant daughter by the arm and leg and swings her around as a form of what he calls exercise, which sparked accusations online of child abuse. Stremousov ran unsuccessfully for mayor of Kherson and the Ukrainian parliament, and became a well-known opponent of vaccines during the COVID-19 pandemic. He initially served in the Kherson region as a Ukrainian government fisheries official. Later, he fashioned himself into a gadfly and political blogger who pressed the government to help ordinary citizens. Roman Tsviakh, a fellow civic activist, who now lives in Poland, recalled that Stremousov publicly confronted officials after some citizens fell and broke bones in an ice storm a few years back. The next day, the sidewalks were covered in salt, he recalled. “He seemed to me to be an honest person who really wanted to work in the interest of people,” said Volodymyr Marus, a journalist who helped train Stremousov how to work as a civic activist. But he has since changed his mind about the collaborator. Ukrainian intelligence officials and past associates told NPR that Stremousov had a thirst for wealth and began using his blog to extort money from local businesses in exchange for not publicizing their wrongdoing. Tsviakh says this behavior was not unusual, but part of Kherson’s culture of corruption, which made the region an easy target for Russian infiltration in advance of the February invasion.
“People like Stremousov evolved because of a broken system,”Tsviakh said. Stremousov allied himself with officials such as Saldo and others who publicly switched sides and backed the Russians in February. “When the war began, all of them started to work as collaborators,” said Marus. “They were not pro-Russian. These were just people who wanted money. They had no sense of patriotism or purpose. They are simply traitors to Ukraine.” Kateryna Malofieieva contributed to this story.
…