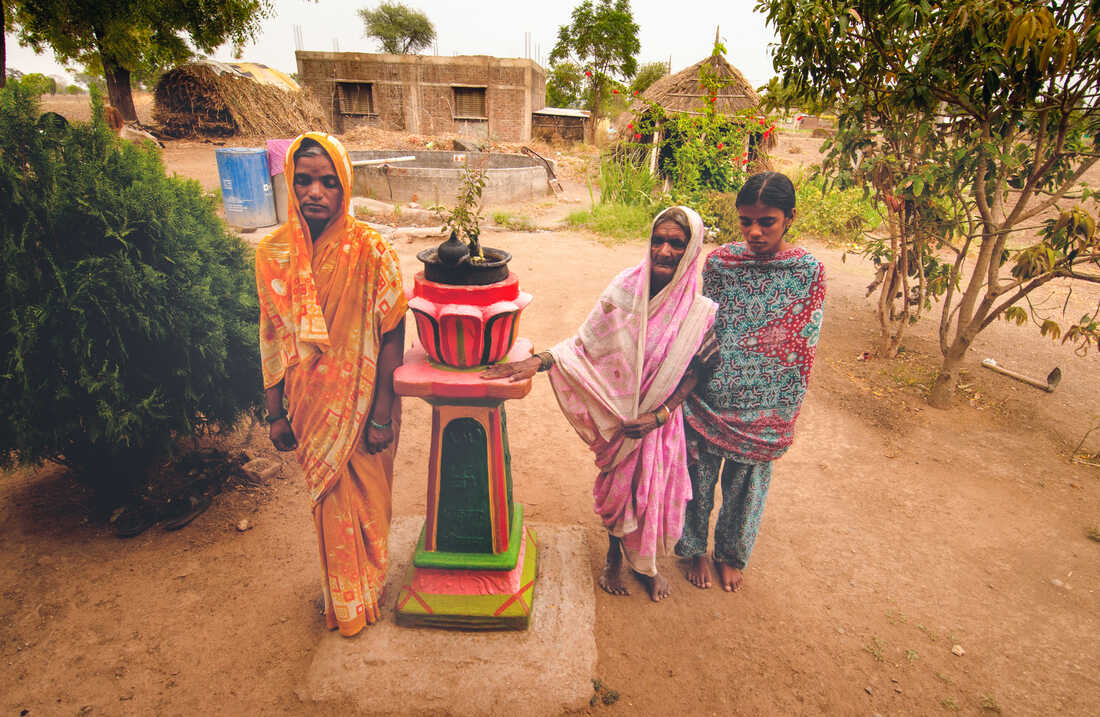 Family members of farmer Dattu Narayan Shewal, who committed suicide after a hailstorm hit his village in Marathwada, India, in 2014. Farmers there were planting single cash crops, so a climate-related disaster would wipe out their livelihoods and leave them unable to buy food. Swayam Shikshan Prayog would seek out their families, particularly the women, and help them get back on their feet.

On Sept. 30, 1993, at 3:56 a.m., a deadly earthquake shook Latur and Osmanabad, districts in the western Indian state of Maharashtra. It killed 10,000 people and demolished 52 villages. While many nongovernmental organizations were involved in the immediate rescue and relief work, there was one group that worked a little differently. It focused on efforts that engaged with women from affected communities and aimed to ensure their long-term wellbeing. The Swayam Shikshan Prayog (SSP), established four years later, began its journey by going door-to-door after the earthquake, meeting thousands of women. The group trained the women to become farmers and entrepreneurs, enabling them to become financially independent and rise above the adversity and loss they’d encountered. Today, Swayam Shikshan Prayog is one of four winners of the Local Adaptation Champions Awards, organized by the Global Center on Adaptation (GCA), that is being announced at the COP27 climate summit in Sharm El-Sheikh, Egypt. The awards recognize community-led efforts to adapt to the negative impacts of climate change. Winners will receive €15,000 to help their further their work. In an interview with NPR, SSP Director Upmanyu Patil shares significant moments from his journey.

This interview has been edited for length and clarity. You’ve helped around 300,000 rural women from across India adapt to climate change. How did your journey begin? It began with our relief efforts during the Latur earthquake.

Swayam Shikshan Prayog Director Upmanyu Patil says he would like to use the prize money to expand the organization to reach more women.

Prema Gopalan was the founder of SSP, but unfortunately we lost her last March. I’ve been working with Prema and the team since 1993. I took over operations after she passed away. In those early days, we worked largely with disasters — the Gujarat Earthquake [2001], the Tamil Nadu tsunami [2004], floods in Bihar [2007] and in Kerala [2018]. We’re working more extensively in three Indian states now — Kerala, Bihar and Maharashtra. What do you focus on during the aftermath of a climate disaster? Our focus is on restoration of livelihoods, especially for women. While relief efforts are needed in the immediate aftermath, long-term rehabilitation is our goal. We support them financially, so they can revive any business ventures that were lost as a result of these disasters. In some cases, we provide training so they can gain more skills that will help them set up entrepreneurial ventures. We are actively engaged with communities 3 to 4 years after a disaster, and even post that we continue to work with communities, helping local women generate more income.
Why did you start working on climate-resilient agriculture initiatives? There were many farmer suicides in Marathwada [in the western Indian state of Maharashtra] when we worked there in 2012-15. When we surveyed the area, we realized that farmers there were planting only a single cash crop like sugar cane or cotton [crops produced only for their commercial value]. This was a problem, because if there was a climate-related disaster and the crop failed, they could not sell it and neither would they have money to buy food. We realized that there were mounting losses in the process, and that was causing great distress [to farmers]. What they needed most was food security. Being an organization with a mission to empower women to take on decision-making roles in their families and communities, we knew that this could come only with economic empowerment, because a breadwinner is a decision-maker. So we began to speak with these families, suggesting that they allo …