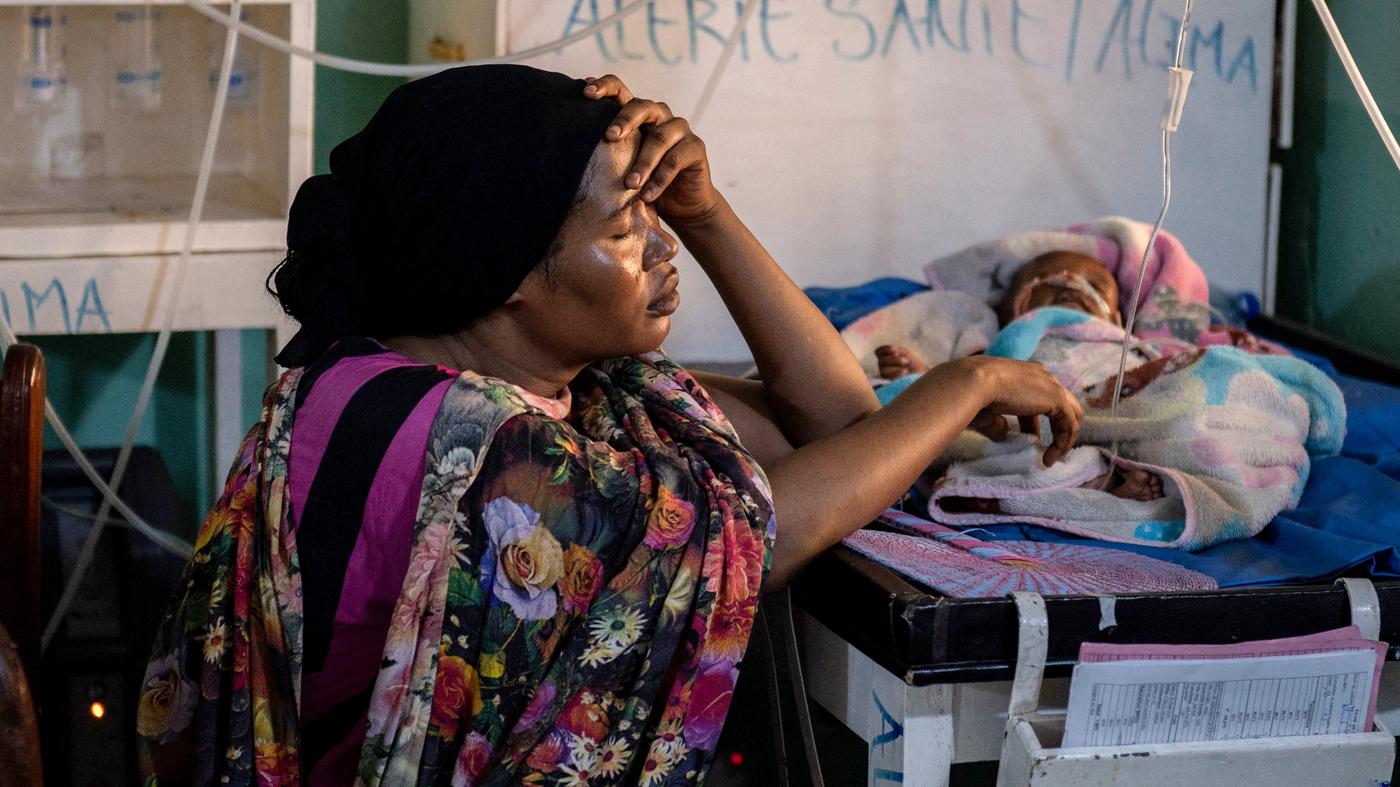 Zania Muhammed comforts her malnourished son, Mazzam Brahim, in the emergency section for critical care patients at a hospital in N’djamena, Chad. The war in Ukraine has caused food prices to skyrocket, leaving many without enough to eat.

Seated on a mat in a muddy courtyard set back from a trash-strewn street, a small group of children are devouring their daily meal: a small hunk of fried bread dipped in tiny glasses of sugary green tea. The light is still low and blue-gray so soon after dawn, but the family patriarch, Youssouf Ibrahim Abderaman, must shortly leave to find work as a day laborer. Abderaman, who is having breakfast with the youngest members of his extended family, has nine children, and several more grandchildren — exactly how many, he struggles to enumerate. Nonetheless, around him the distended bellies and desperation for such meager portions indicate all are hungry. “If you earn a living day by day you eat whatever you get,” Abderaman explains. “Sometimes you don’t get anything to eat for a day. Sometimes you are able to buy food for the whole day, sometimes half a day. That’s how it goes.” A scramble for survival At his baked brick home, he describes his family’s daily scramble for survival in this small town of 50,000 on the southern edge of the Sahara Desert, in central Chad. Abderaman is dressed in a long white robe, and is painfully thin, emblematic of the food shortages that have grown ever more acute in this land-locked nation — among the poorest in Africa. A complex combination of climate change, regional conflicts and rising commodity prices — including wheat — has driven the shortages, which have been exacerbated this year by Russia’s invasion of Ukraine many thousands of miles away.

“When there is enough food, you eat together. Otherwise, you just give it to them,” Abderaman says, describing the difficult decision he makes with increasing frequency when he fails to find paid work in the nearby fields — prioritizing his children’s stomachs over his own.

Several blocks away at the town’s only bakery, daybreak is marked by trays of baguettes brought out from the oven — a culinary reminder of the country’s French colonial history. Several young men strap white sacks of the light yellow loafs to small motorbikes, or pile them high in a pick-up truck that’s pulled into the yard. Balancing several bags on the back of his own bike is Mahamat Tahir, responsible for the bakery’s distribution, who says there are now far fewer customers who can afford to buy their daily bread. “Sales have dropped hugely,” he says. Fuel to power the ovens has skyrocketed in price, as has the bread’s other key constituent, flour. “We’re continuing to function just to avoid closing down,” he adds, before revving up his engine to depart on his delivery round. “The company is not making any profit.” In the town’s dusty market later that afternoon, several stalls are open and display small bowls of grain, nuts and some vegetables — but there are very few customers to purchase those products still for sale. For Alhadj Adoum Berkedaï, president of the local chamber of commerce and one of the largest wholesale importers in Moussoro, the conflict in Ukraine and its consequences represent a huge threat to his business. “In the past, prices increase after the rainy season,” he says, referring to the annual period — known as the “lean season” — when food supplies run short in the wider sub-Saharan region called the Sahel. During that time, crops have been planted in soil moistened by heavy rains and residents must wait months for them to be harvestable. In the meantime hunger often stalks many Sahelian communities.
Walking through his warehouse and pointing to storerooms that now sit entirely empty, Berkedaï says the prices of pasta, …