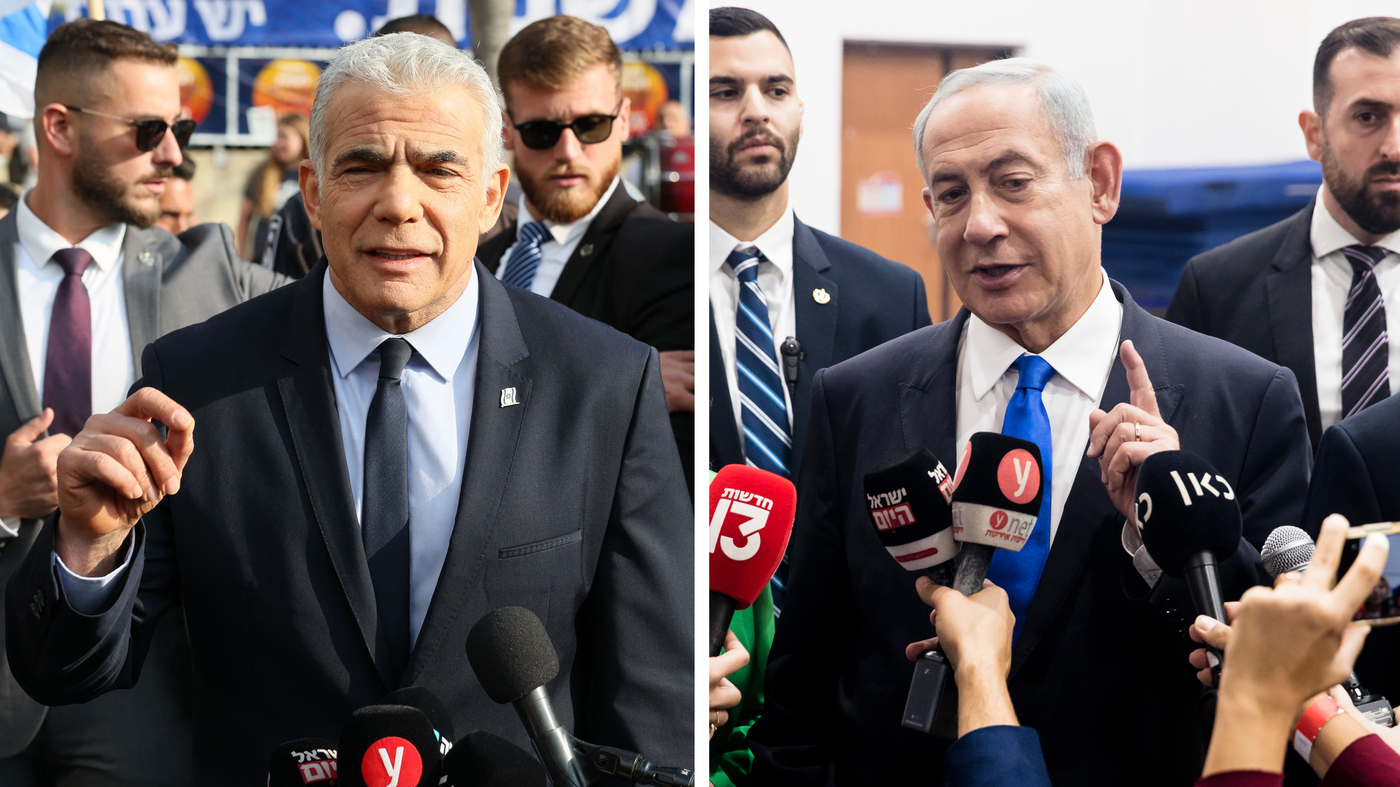 Left: Israeli Prime Minister Yair Lapid addresses the media outside a polling station in Tel Aviv on Tuesday. Right: Former Prime Minister Benjamin Netanyahu speaks to the press after casting his vote in Jerusalem on Tuesday.

JERUSALEM — Israelis are voting Tuesday in their fifth election in 3 1/2 years, an election that could see former Prime Minister Benjamin Netanyahu make a comeback. This time, he’s partnering with some of the most fringe elements of Israel’s far-right to try to unseat centrist Prime Minister Yair Lapid.

“Not A False Alarm,” reads the front-page headline on the cover of the left-leaning Haaretz newspaper. “Just Choose,” reads the headline on the cover of the mainstream Yediot Ahronot paper. The shared message: the vote is consequential. But after four consecutive elections in which voting patterns have not changed, it’s unclear whether voters will cast their ballots differently this time to break the rut — or if political parties can find a way to form new, more durable alliances to bring stability and prevent another round of elections in the coming months. Israel’s political map is split down the middle between parties that want populist nationalist icon Netanyahu in power, and parties that say the polarizing figure on trial for corruption is unfit to serve. A diverse coalition unseated Netanyahu last year, but it broke up this year over ideological differences.

If Netanyahu’s bloc doesn’t win, a stalemate is another possible outcome of the vote. If no candidate can form a 61-lawmaker majority in the 120-member parliament, Lapid would remain a caretaker leader and elections would be held yet again. Polls show no easy path to victory for Lapid or other anti-Netanyahu candidates. Lapid is campaigning with center-left allies, arguing he will keep right-wing extremism at bay. Netanyahu is promising to bring Israelis a sense of security, after Palestinians killed 25 Israeli civilians and soldiers this year. Israeli troops have killed more than 130 Palestinian militants and civilians during the same period, the deadliest toll in several years. If Netanyahu wins, he could form a government with religious and far-right partners, including parties that promote hostile policies against Palestinian Arab citizens, anti-LGBTQ sentiment and proposals to weaken the independence of the judiciary — which could help Netanyahu escape conviction in his corruption trial. “The right side don’t like gay people, don’t like Arabs,” said Liron Gur, a gay Israeli voter. “I believe if they will be the power, my life will be very bad.” At a polling station in Jerusalem where Netanyahu cast his ballot, some right-wing voters said they were abandoning support this time for Netanyahu and his right-wing allies.
“We don’t believe him,” says cab driver Udi Avni, who for the first time is not voting for Netanyahu and says he’ll cast his vote for the center-left Labor Party instead. “He just care[s] about himself. About his trial … to be free.” “It’s too right-wing at the moment,” says Reuben Rotenberg about the main religious party running for election. It’s a tight race. Polls will close at 10 p.m. Israel time (4 p.m. ET) but it could take weeks before there is a clear winner, as parties negotiate to form a parliamentary majority. Natan Odenheimer contributed to this story from Jerusalem.
…