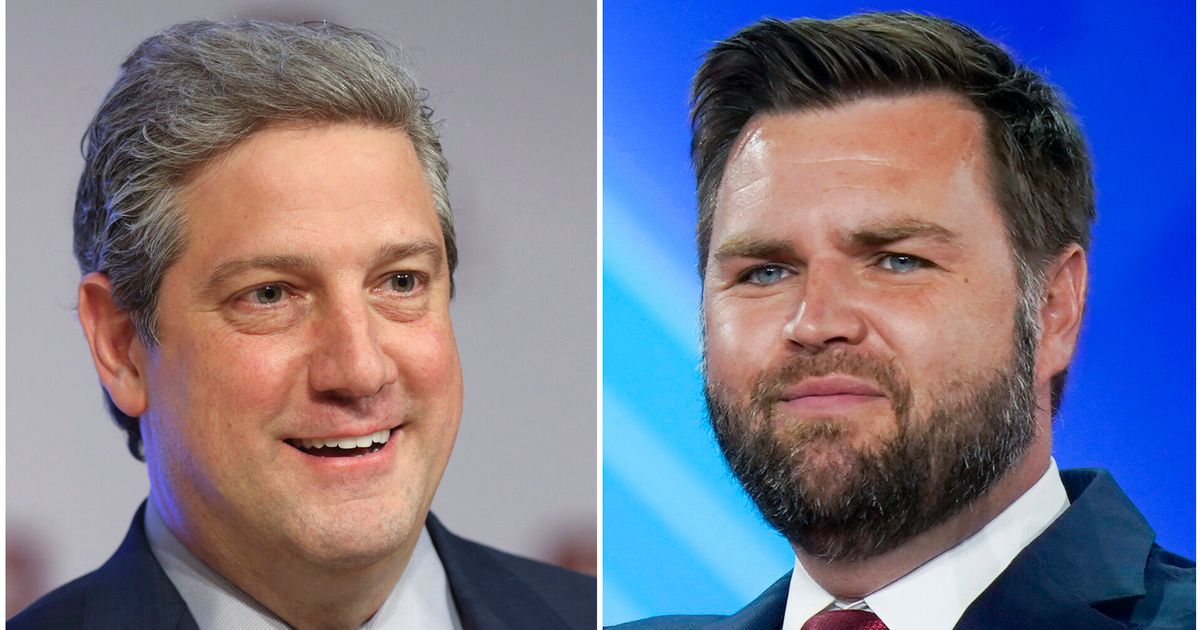 As RawStory notes, Vance appeared to be conflating Ryan’s support for providing gender transition care to transgender and nonbinary people relying on state medical care ― including those in prison or immigration detention — with his support for reducing the size of the immigration system.Kat Abu of Media Matters For America posted the exchange between Vance and Carlson, describing Vance’s fear-mongering slab of Republican red meat as “Mad-Libs for bigots.”She also called out the “Hillbilly Elegy” author for calling Ryan a “poster board” (he presumably meant “poster boy”).Advertisementyes this clip is very funny but he also called Tim Ryan a “poster board” and I think we need to talk about that— Kat Abu (@abughazalehkat) November 4, 2022

Other Twitter users mocked Vance’s claim.Saying he’d provide medical care to transgender people in prison or immigration detention is quite a bit different that what Vance is suggesting. Vance makes it sound like he’s planning to recruit transgender people from other countries.— Crunk (@Crunk1977) November 4, 2022

AdvertisementI know this is Tucker’s typical expression, but his dumb, vaguely perplexed stare is an appropriate response to the utter nonsense Vancy is spouting. https://t.co/xicpzzaWax— James Surowiecki (@JamesSurowiecki) November 4, 2022

Some people wondered why Democratic candidates didn’t make similar unfounded claims.Have Democrats considered just making shit up like this?Just give it a shot. Here:J.D. Vance wants to round up everybody’s puppies for Dr. Oz to conduct painful experiments on in his lab. https://t.co/Dyf6icyaJK— Matt Ortega (@MattOrtega) November 4, 2022

But then there were those who decided the only proper response was to go full tinfoil.“Tukker! Tim Ryanz haz Bill use taxpayer moolah ta lasso the moon an’ turn all Virgos inta Capricornz! Pretty sure he wanna make a tranz immigrant King of Congress like fer real! The whole thingz Supergay!” *Tucker furrows brow – blinks twice*“Like…Super Gay!” https://t.co/SFynlcCKH1— Hal Sparks (@HalSparks) November 4, 2022

The illegal aliens will then poop in litter boxes in gender neutral school bathrooms while being forced to watch drag queens. https://t.co/yW6wZmBIA8— Jeff Ermann (@Jeff_Ermann) November 4, 2022

…then they take the now-transgendered illegal aliens and teach them Critical Race Theory, while forcing them get abortions. While they’re still drugged up on fentanyl from both surgeries, they release them in the suburbs for a crime-orgy.Have I got that right, JD? https://t.co/T4iHr14cTn— Jonah Blank (@JonahBlank) November 4, 2022