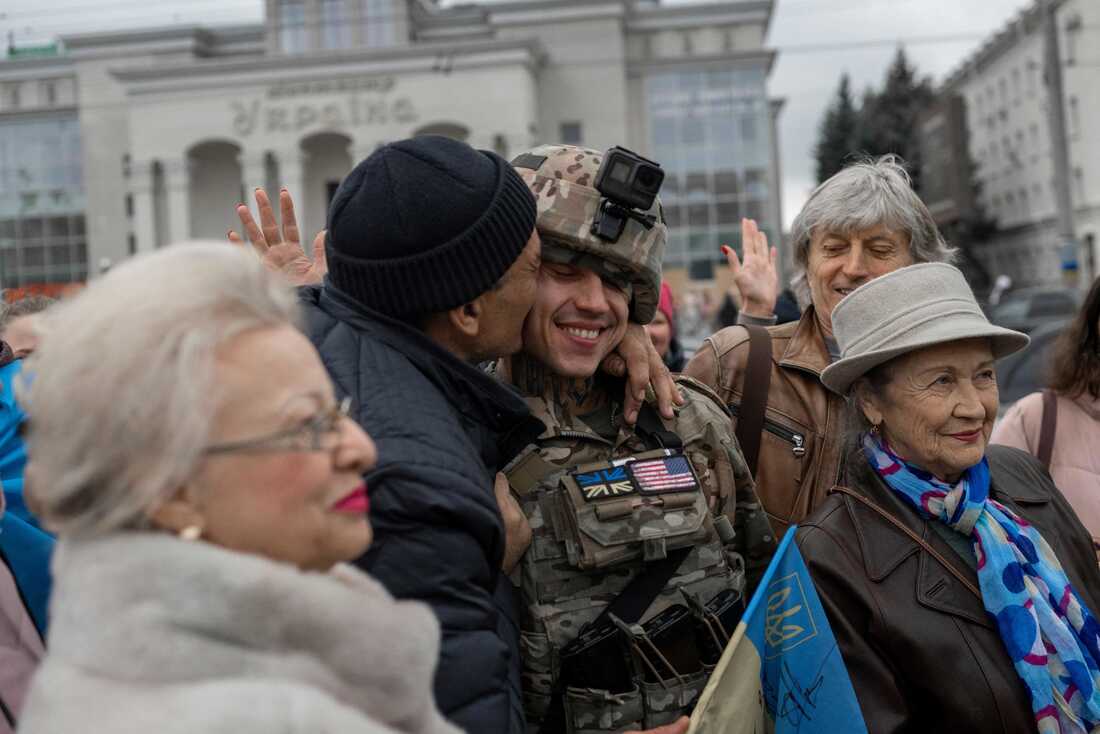 A man hugs a Ukrainian soldier as local residents gather to celebrate the liberation of Kherson on Sunday.

As the week begins, here’s a look ahead and a roundup of key developments from the past week. What to watch this week Since Russia’s retreat, Ukrainian forces have been working to restore utilities and provide basic needs for residents in the southern city of Kherson. On Monday, Ukraine’s President Volodymyr Zelenskyy visited the city and hailed Russia’s withdrawal as “the beginning of the end of the war.” But anticipation is building as both sides prepare their next moves along shifted front lines. The G-20 summit continues in Indonesia, where the Russia-Ukraine war and its global economic fallout loom large. On the sidelines Monday, President Biden discussed Ukraine among other issues with Chinese leader Xi Jinping. Biden is due to meet British Prime Minister Rishi Sunak on Wednesday. The United Nations General Assembly is holding an emergency special session on Ukraine Monday. A U.S. House subcommittee holds a hearing Wednesday titled “Russia’s Waning Global Influence.” On Thursday, global summitry continues with a meeting of the Asia-Pacific Economic Cooperation (APEC) forum in Thailand.

The U.N.-brokered deal to safely export grain and other farm goods out of the Black Sea is set to expire Saturday, barring an extension. What happened last week Ukrainians watched the U.S. midterms with an eye on the future of aid, with President Zelenskyy urging for “unwavering unity” and support for Ukraine. U.S. Ambassador to the U.N. Linda Thomas-Greenfield visited Kyiv, Nov. 8, to talk about world hunger and press for renewal of the grain deal, due to expire Nov. 19. That followed a Ukraine trip the week before by the top U.S. diplomat on European and Eurasian affairs, Assistant Secretary of State Karen Donfried. American basketball star Brittney Griner was moved to a Russian penal colony to begin serving out her nine-year sentence on drug smuggling charges Nov. 9. A spokesman for the Russian occupation in Ukraine’s Kherson region died in a car accident, the regional Kremlin-appointed administration said Nov. 9. Russian forces retreated from Kherson city — the only regional capital they had seized from Ukraine since launching their invasion in February. On Nov. 11, Ukrainian forces began moving into Kherson and were greeted by cheering residents. The war in Ukraine was a serious issue at the U.N. climate conference. Ukraine used the COP27 summit to talk about how the war has caused “ecocide,” while experts pointed out the war is driv …