Many vets are landing jobs, but the transition can be tough – Maryland Daily Record 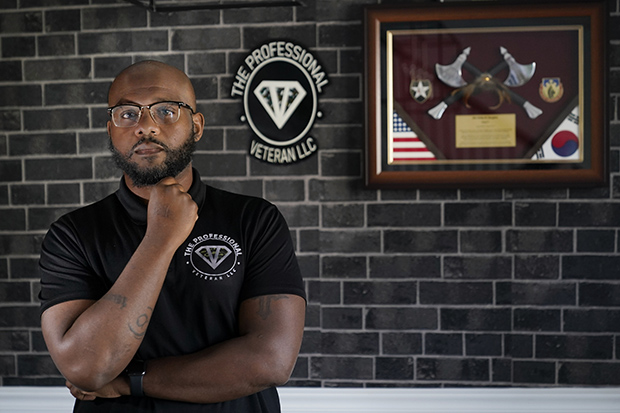 Phillip Slaughter, who served in the U.S. Army for 18 years, poses in his home Nov. 10 in Clarksville, Tenn. Framed on his wall on the right are memorabilia from a military assignment in South Korea where he worked as a logistics trainer. On the left is the logo for his company in which he helps service members transition into the civilian workforce. (AP Photo/Mark Humphrey)
NORFOLK, Va. — Phillip Slaughter left the Army after 18 years and found a job similar to one he had in uniform: behind the wheel of a truck. Instead of towing food and bullets through war zones, he hauled packages for FedEx.
It wasn’t what he wanted to do. The work aggravated his post-traumatic stress disorder. It would be three years and several jobs before he landed his ideal position as a sourcing recruiter for a tech company.
“I think it’s the first job that I’ve worked 10 consecutive months without quitting,” said Slaughter, 41, who lives in Clarksville, Tennessee.
Slaughter is a U.S. military veteran who found a job he loves at a time when the nation is experiencing some of its lowest monthly veteran unemployment on record. But the rate — 2.7% in October — can mask the difficulty of a transition that sometimes takes years of working unfulfilling jobs, while forging a new identity and a new purpose beyond serving one’s country.
“Even though (veteran unemployment) is low, I’m interested to see a survey on how many people are happy in the position they’re in,” said Slaughter, who also runs his own consulting firm for fellow vets.
Veterans account for about 7% of the civilian population, according to the Bureau of Labor Statistics. Their jobless rate can help gauge the nation’s efforts to assist former service members, experts say. It can also reflect on the military and how it prepares departing personnel. High veteran unemployment is not good for recruiting.
For this Veterans Day, a handful of former service members talked about their experiences looking for work at a time when the veteran jobless rate is so low. For some, it wa …