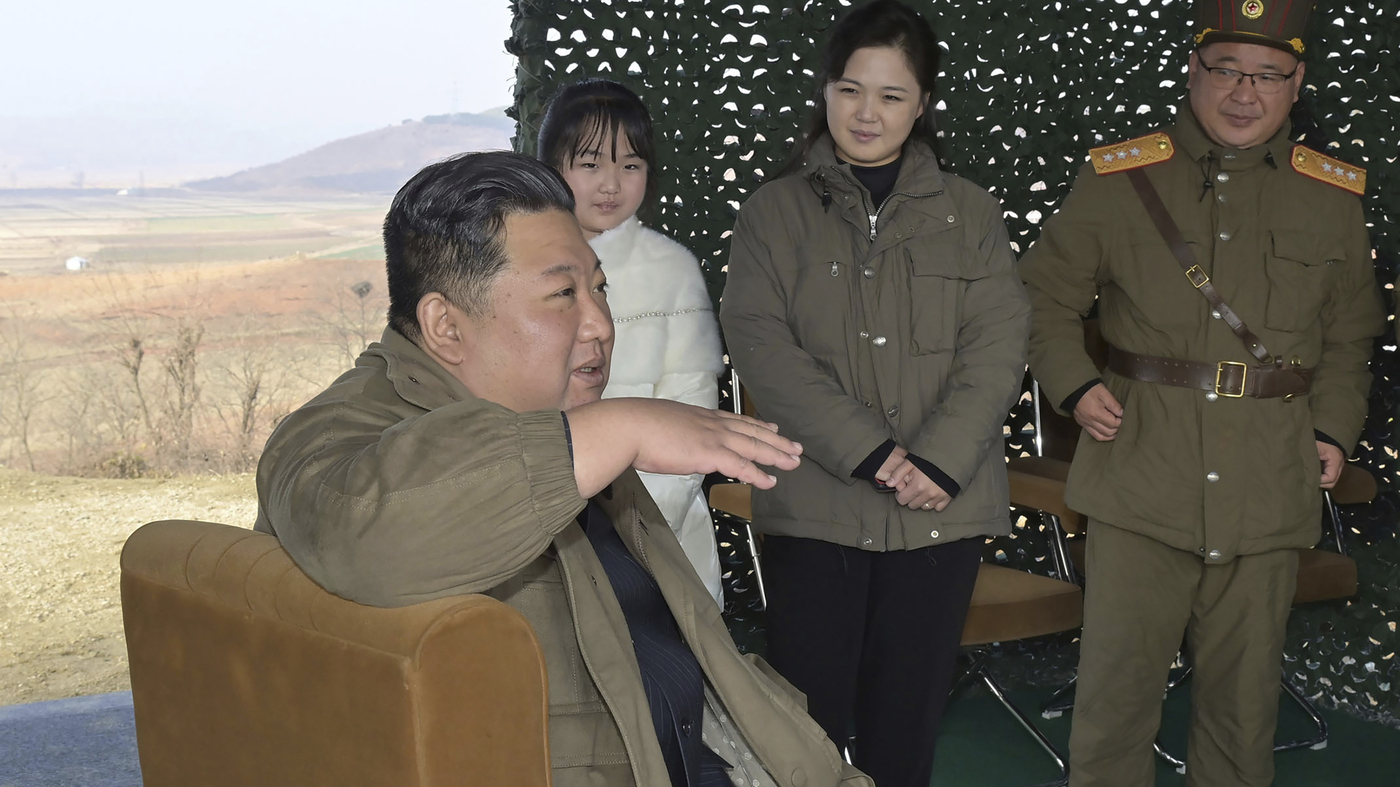 This photo provided on Nov. 19, 2022 by the North Korean government shows North Korean leader Kim Jong Un and his daughter inspect the site of a missile launch at Pyongyang International Airport in Pyongyang, North Korea, on Friday.

SEOUL, South Korea — North Korea has unveiled the little-known daughter of its leader Kim Jong Un at a missile launch site, attracting keen attention on a fourth-generation member of the dynastic family that has ruled North Korea for more than seven decades. The North’s state media said Saturday that Kim had observed the launch of its new type of intercontinental ballistic missile with his wife Ri Sol Ju, their “beloved daughter” and other officials the previous day. Kim said the launch of the Hwasong-17 missile — the North’s longest-range, nuclear-capable missile — proved he has a reliable weapon to contain U.S.-led military threats. The main Rodong Sinmun newspaper also released a slew of photos of Kim watching a soaring missile from a distance with his daughter. Other photos showed her with her hair pulled back, wearing a white coat and a pair of red shoes as she walked in hand-in-hand with her father by a huge missile atop a launch truck.

It’s the first time for North Korea’s state media to mention the daughter or publicize her photos. KCNA didn’t provide further details about her like her name and age. Much of Kim’s private life is still unknown. But South Korean media reported Kim married Ri, a former singer, in 2009, and that the couple have three children who were born in 2010, 2013 and 2017. It wasn’t known which child Kim took to the launch site. But in 2013, after a trip to Pyongyang, retired NBA star Dennis Rodman told the British newspaper the Guardian that he and Kim had a “relaxing time by the sea” with the leader’s family and that he held Kim’s baby daughter, named Ju Ae. The identities of Kim’s children are a source of strong outside interest as the 38-year-old ruler hasn’t publicly anointed an heir apparent. When he disappeared from public eye for an extended period in 2020 amid unconfirmed rumors about health conditions, global media frenzy flared over who was next in line to run an impoverished yet nuclear-armed country. Many observers said at the time that Kim’s younger sister, Kim Yo Jong, would step in and run the country if her brother was incapacitated.

The Kim family has governed North Korea with a strong personality following built around key family members since Kim’s grandfather, Kim Il Sung, founded the country in 1948. The family’s so-called Paektu bloodline, named after the North’s most sacred mountain, allows only direct family members to rule the country. “It’s much too soon to infer anything about succession within the Kim regime,” said Leif-Eric Easley, a professor at Ewha University in Seoul. “However, publicly including his wife and daughter in what Kim claims as a historically successful missile test associates the family business of ruling North Korea with the nation’s missile programs.”
“This may be an attempt to compensate for how few economic accomplishments Kim has to support his domestic legitimacy,” Easley said. Analyst Cheong Seong-Chang at the private Sejong Institute in South Korea said if Kim continues to take this daughter to key public events, that could signal that she would become Kim’s successor. “Under North Korea’s system, the children of Kim Jong Un would have the status of a prince or princess, like in a dynasty. As the Rodong Sinmnum newspaper publicized the photo of the daughter, who took after Kim Jong Un and Ri Sol …