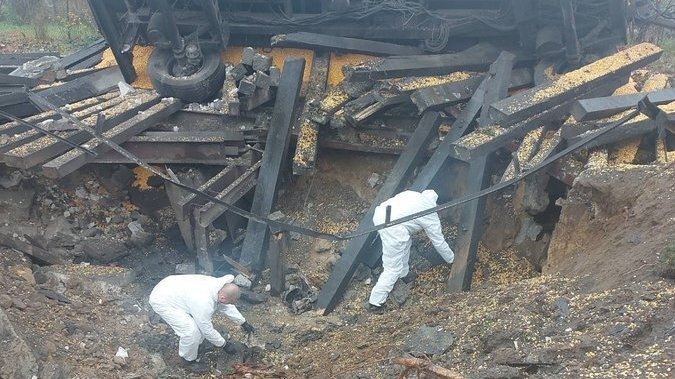 Members of the Polish police inspect the fields near the village of Przewodow, Poland, where an explosion killed two people Tuesday.

Follow live updates on the war in Ukraine here. KYIV, Ukraine — Poland’s president said Wednesday that it appears a missile that landed just inside the country’s border was from Ukraine in what he called an “unfortunate accident.” “We have no evidence at the moment that it was a rocket launched by Russian forces,” President Andrzej Duda said. “However, there are many indications that it was a missile that was used by Ukraine’s anti-missile defense.” Two Polish citizens were killed Tuesday when the missile came crashing down in a rural village in eastern Poland, just a few miles from the western border of Ukraine. This happened amid a Russian barrage of missiles fired at cities across Ukraine, with Ukraine responding with its air defense systems. NATO members discussed the issue in Brussels, and the secretary general of alliance, Jens Stoltenberg, said a preliminary analysis pointed to a Ukrainian air defense missile that had been fired at an incoming Russian missile. “Let me be clear: this is not Ukraine’s fault. Russia bears ultimate responsibility as it continues its illegal war against Ukraine,” Stoltenberg said.

In Russia, Defense Ministry spokesman Igor Konashenkov said Russian specialists had studied images of the explosion in Poland and concluded rocket fragments were from an S-300 surface-to-air missile system fired by Ukraine. Konashenkov insisted Russia carried out a wave of what he called “precision” strikes on Ukrainian military and energy infrastructure. He said this included attacks in western Ukraine, but all were 20 miles or more away from Poland’s border. At the G20 summit in Indonesia, President Biden has said the missile was “probably” not fired from Russia. Still, he supported an investigation with Poland and condemned Moscow’s latest attacks on Ukraine. In Ukraine, President Volodomyr Zelenskyy spoke in a brief video on Wednesday morning, wishing citizens a “normal day” after Tuesday’s missile barrage. He didn’t say whose missile may have exploded in Poland. This was in contrast to his initial comment Tuesday night, when he said, “This is a Russian missile attack on collective security.”

Only Russia is responsible for the war in Ukraine and massive missile strikes. Only Russia is behind the rapidly growing risks for the border countries. No need to look for excuses and postpone key decisions. Time for Europe to “close the sky over 🇺🇦”. For your own safety too…— Михайло Подоляк (@Podolyak_M) November 16, 2022

One of his top advisers, Mykhailo Podolyak, said that regardless of whose missile landed in Poland, Russia was responsible. “Only Russia is responsible for the war in Ukraine and massive missile strikes,” he tweeted. “Only Russia is behind the rapidly growing risks for the border countries. No need to look for excuses and postpone key decisions. Time for Europe to close the sky over Ukraine.” Russia fired a barrage of around 100 missiles into Ukraine in just a couple hours Tuesday afternoon’s missiles targeted the Ukraine’s electricity grid as it’s been doing for the past m …