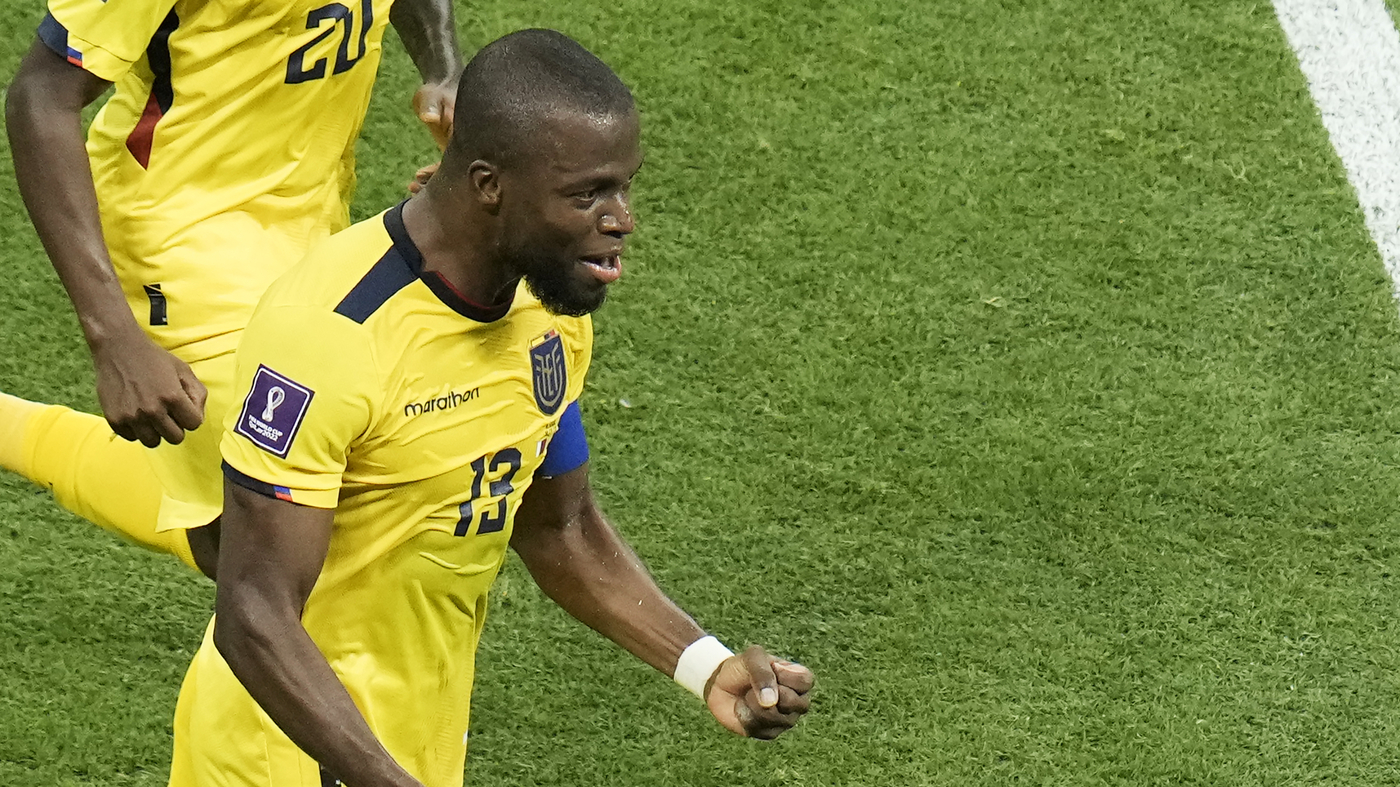 Ecuador’s Enner Valencia celebrates after scoring his side’s second goal during the match between Qatar and Ecuador in Al Khor, Qatar, on Sunday.

AL KHOR, Qatar — Qatar’s first ever World Cup match ended in dismay for an overmatched team and with a place in unwanted soccer history. The controversy-laced tournament opened Sunday with Qatar getting outplayed and embarrassed in a 2-0 loss to Ecuador in front of 67,372 fans at Al Bayt Stadium. In 92 years of soccer’s biggest event, a host team had never lost its opening game. The first World Cup in the Middle East is a chance for Qatar, a tiny Arab country jutting out into the Persian Gulf, to showcase itself to the wider world. Its soccer team, playing at this level for the first time by virtue of hosting the tournament, couldn’t live up to the moment as Ecuador captain Enner Valencia scored both goals in the first half.

The match took place after a colorful 30-minute opening ceremony — fronted by Oscar-winning actor Morgan Freeman and attended by powerful dignitaries including Saudi Arabian Crown Prince Mohammed bin Salman — that promoted inclusivity and mankind living “under one tent.” For many, that would jar with this World Cup being hosting by an emirate where homosexual acts are illegal, one that has come under strong criticism for how migrant workers have been treated building stadiums and tournament infrastructure since Qatar won the scandal-shrouded vote in 2010.

The yearslong scrutiny was never going to stop just because play on the field finally entered the narrative of a tournament dogged by human rights controversies, yet a win for the host nation would have at least put a favorable light on Qatar, soccer-wise. Instead, Qatar’s players, fresh from spending seven months together in a pre-tournament training camp under Spanish coach Felix Sanchez, froze in front of an expectant crowd and a disciplined Ecuador team that might just pose a danger to more high-profile opponents over the next few weeks.

Valencia thought he had scored in the third minute when he headed in from close range following an acrobatic cross from Felix Torres. After a video review of about two minutes, Ecuadorian celebrations were cut short when the goal was ruled out for what appeared to be a marginal offside. Ecuador did take the lead, however, in the 16th minute when Valencia was tripped by Saad Alsheeb after rounding the goalkeeper, who was booked for the challenge. Valencia was nonchalant as he trotted up and converted the spot kick into the bottom corner. The 33-year-old striker added his second in the 33rd by heading in a right-wing cross from Angelo Preciado.
With Qatar’s passes often going astray and its defensive raggedness repeatedly exposed, Ecuador had no problem holding onto its lead as Sanchez stood helpless in his technical area and the home fans fell quiet.

There were lots of empty seats for a second half that was almost a damage-limitation exercise for Qatar on one of the biggest nights in the nation’s history. Leaders from the Middle East and Africa were present Camels and Arabian horses lined the entrance to the stadium, a Bedouin tent-inspired venue located in the rather isolated surrounds of the rural town of Al Khor, north of Doha. And the atmospheric, seven-act opening ceremony lived up to its billing, the highlight being when Freeman extended one yellow-gloved hand to a FIFA World Cup ambassador suffering from a rare spinal disorder in an image representing inclusion in a country facing international criticism over its human-rights record. Looking on from the luxury seats were FIFA president Gianni Infantino alongside leaders from the Middle East and Africa. Qatar’s emir, Sheikh Tamim bin Hamad Al Thani, drew a thunderous applause in a short speech delivered in Arabic from the suite, with Infantino and the monarch’s father, Sheikh Hamad bin Khalifa Al Thani, on either side of him. “I welcome you and good luck to all,” the emir said in his only words spoken in English. After this display, Qatar will need mor …