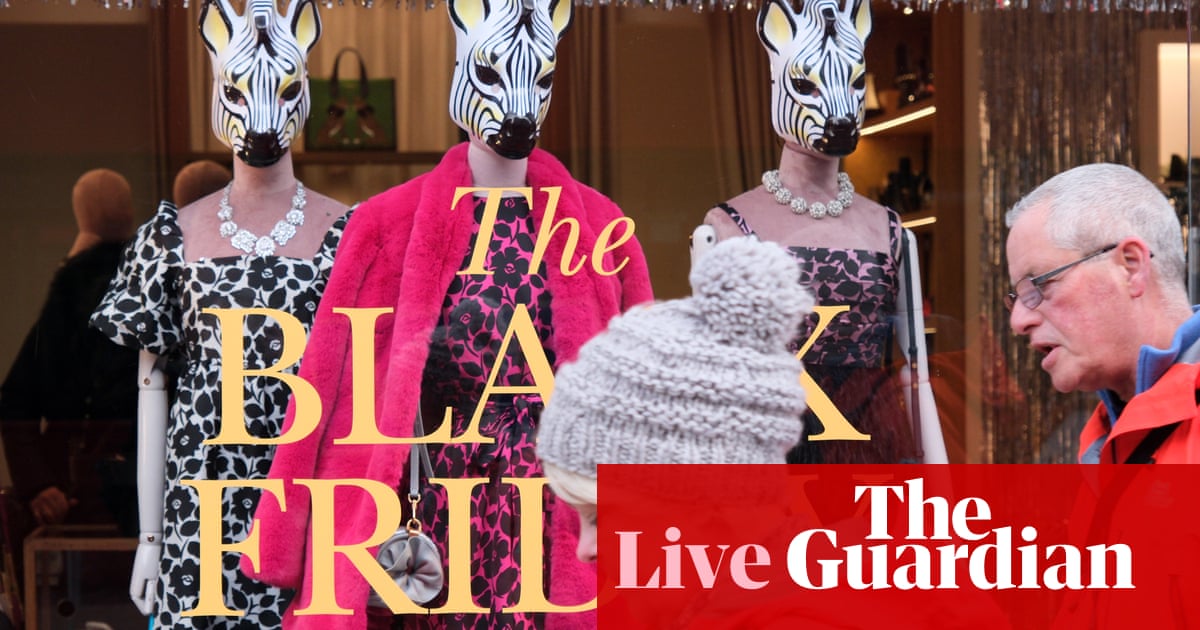 02.06 ESTIntroduction: Black Friday could be bleak as consumers cut backGood morning, and welcome to our rolling coverage of business, the financial markets and the world economy.The stakes are high for retailers today, as they try to tempt shoppers to spend with a flurry of Black Friday offers.But they could face a “Bleak Friday” this year, economists say, as the cost of living crisis means consumers will resist discounts on new electronics kit, homeware, clothing and the like. Plus, ongoing strikes at Royal Mail could deter people from shopping online.Bleak Friday How will Black Friday be impacted by postal worker strikes? @DaveWardGS says they have no choice.#KayBurley FC pic.twitter.com/vJmDdR7oFd— Kay Burley (@KayBurley) November 24, 2022
Black Friday, originally an American post-Thanksgiving wheeze, is now more of an global event – thanks to international retailers looking to kick-start the festive rush.These days, ‘Black Friday’ deals often last at least a week – running into the pre-Christmas offers, and then the January sales. But some of the offers may not be as generous as they look (and may get more generous once retailers get desperate to shift stock).The CEBR thinktank reckons we could see a “Bleak Friday”, with discounts unlikely to save struggling retailers as UK consumers cut back spending by an estimated £1.5bn in the last quarter of this year.The CEBR say:The cost-of-living crisis, combined with warnings that discounts are often more generous at other times of year and the threat of a Royal Mail strike, will mean that it is a weak year for Black Friday sales and we may see January sales start early in an attempt to shift stock.Black Friday can also suck in spending that would have happened anyway, either before or after the big day/week. This year, people simply have less disposable income to spend at all, with surveys showing many households are cutting back on spending.The CEBR says:While 42% of Brits have reported shopping around more due to the rising cost of living, suggesting they are looking for discounts, a higher share, 65%, reported they are spending less on non-essentials due to these cost pressures.It’s the first Black Friday without Covid restrictions since 2019, which ought to help retailers get customers into shops. But sales and profits could still be lower than 2021.As Danni Hewson, AJ Bell financial analyst, put it:“Friday should be one of the busiest days for UK retailers but concerns about constrained budgets and the added issue of a strike by Royal Mail workers are both expected to make the affair a rather damp squib.Retail expert Richard Lim told the BBC he was expecting Black Friday to be a more “muted affair” with sales down on last year.Lim said:“Inevitably, I think what we’re going to see is consumers being much more careful with their spending.”Black Friday: Cost of living crisis may hit sales rush https://t.co/8jqJ8xUkUF— BBC News (UK) (@BBCNews) November 25, 2022
Also coming up todayRetail giant Amazon faces a wave of Black Friday protests and strikes, as workers stage walkouts over pay and conditions (more on that short …