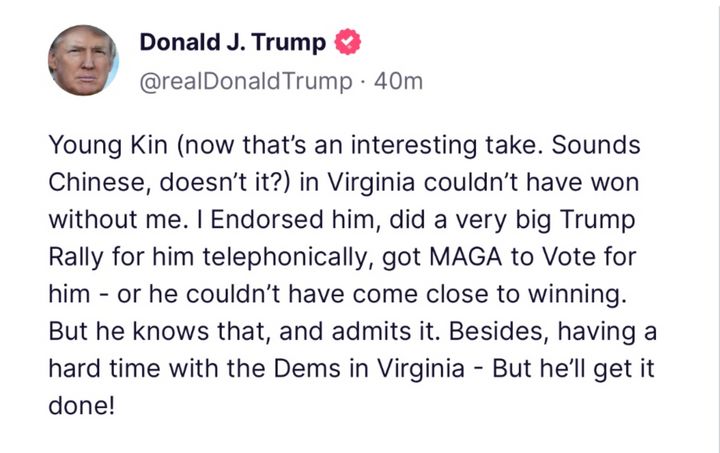 When the going gets tough, the Trump gets racist.At least that seems to be the way Donald Trump wants to deal with Virginia Gov. Glenn Youngkin, who was elected to office in 2021 despite going against Republican conventional wisdom at the time and distancing himself from the former president.On Friday, the former president took to Truth Social in an attempt to lay waste against Youngkin — in part with a racist insult against Asian people.AdvertisementDonald Trump attempts to cast aspersions on Virginia governor Glenn Youngkin by suggesting his name “sounds Chinese.”Truth Social screenshotAlthough racism is a big part of Trump’s brand, the latest attack comes at a time when Republican voters are considering whether it’s time to dump him, considering candidates he endorsed didn’t do as well in midterms as expected.Considering Trump’s racist attack of Youngkin came just days after he attacked Florida Gov. Ron DeSantis as “average,” and referred to him at a rally as “Ron DiSanctimonious,” it’s possible the former president sees both governors as potential threat to a possible 2024 presidential run.Youngkin responded to the attack by claiming he does not call people names and he is focused on bringing people together.AdvertisementAsked about former President Trump saying Gov. Youngkin’s name “sounds Chinese” and that he couldn’t have won without him, @GovernorVA says he didn’t see the comments. He said he does not call people names and he is focused on bringing people together @8NEWS pic.twitter.com/PlZ9aFXTWv— Jackie DeFusco (@Jackie8News) November 11, 2022

“That’s not the way I roll, and the way I behave,” Youngkin told reporters. Twitter users, on the other hand, had strong opinions about Trump’s not-very-subtle attempt to cast aspersions on Youngkin by appealing to his supporters’ base instincts, even conservatives like Ben Shapiro.”Sounds Chinese, doesn’t it?”WUT DA FUQUE— Ben Shapiro (@benshapiro) November 11, 2022

Others called out Trump as well.If Trump really thinks that Youngkin “sounds Chinese,” then I would respectfully suggest that the former guy’s brain has turned into moo shu. pic.twitter.com/2YYTG5yFCR— George Conway🌻 (@gtconway3d) November 11, 2022

AdvertisementTrump is out there attacking Glenn Youngkin by using his typical Anti-Asian blatant racism. His deplorable demeanor has no bottom. There’s a lot of talk about the Trump era being over in the Republican party he destroyed. Not buying it. Don’t tell me. Show me.— Olivia of Troye (@OliviaTroye) November 11, 2022

Trump now going after Youngkin by saying his name sounds Chinese if you’re wondering how Trump plans to appeal to the GOP base in a 2024 primary. pic.twitter.com/dMSx1rHsVZ— The Wokest Numbersmuncher (@NumbersMuncher) November 11, 2022

Of course, some people had questions.Others just called out the pearl-clutching comments.At least when Twitter dies we won’t have to see people constantly shocked to learn Trump is a racist.— Adam Parkhomenko (@AdamParkhomenko) November 11, 2022

Both astonishing and not: Trump has used openly racist language for years without any meaningful pushback from anyone in the republican party. Why would he stop now? https://t.co/ZeGIfIsUU3— Ronald Brownstein (@RonBrownstein) November 11, 2022

AdvertisementPodcast host Tim Pool suggested the former president’s racist remark was actually a masterful use of game theory ― despite years of evidence showing Trump doesn’t have a strategic bone in his body.trump is playing 12th dimensional chess and insulting desantis and youngkin because he knows the media will now be forced to defend them https://t.co/EwY0THPiCe— Tim Pool (@Timcast) November 11, 2022