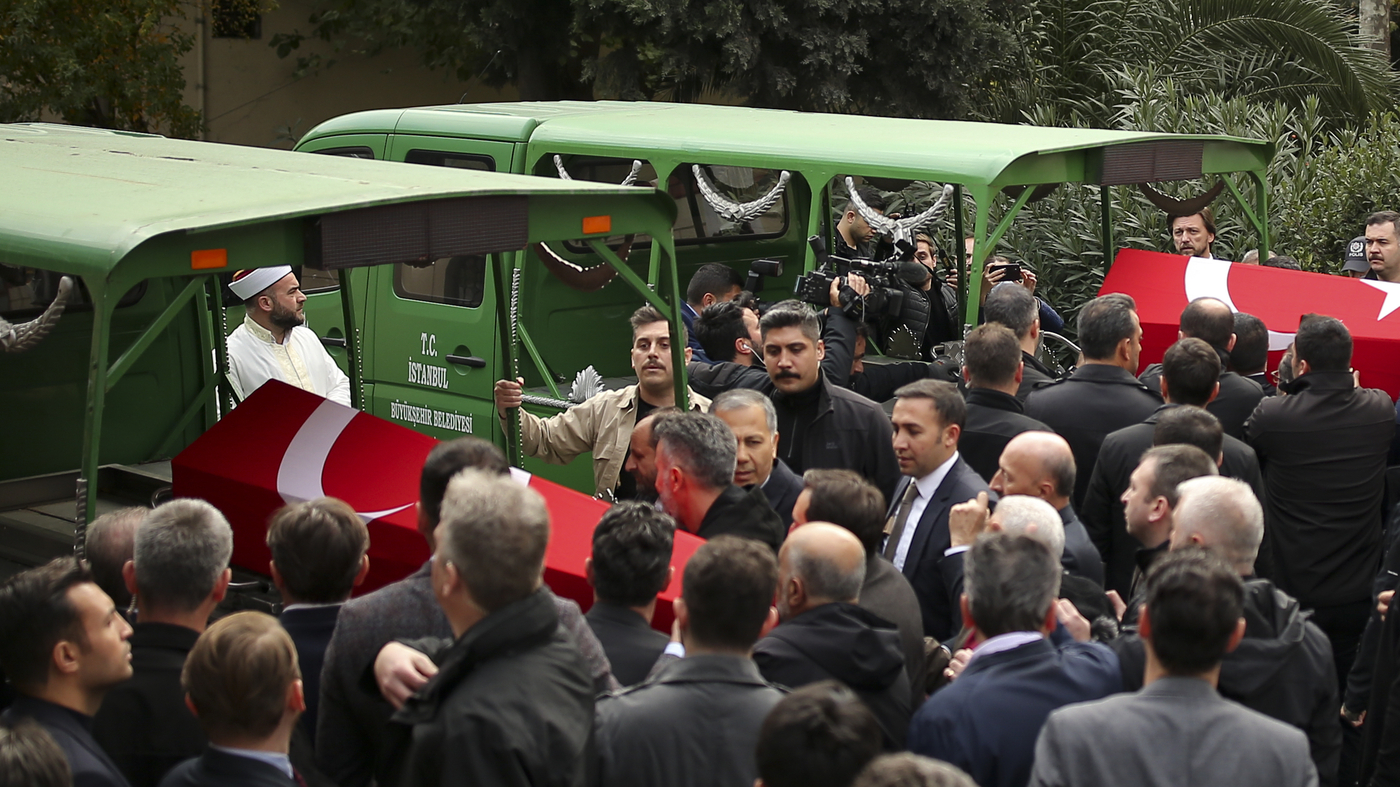 Relatives and friends of Arzu Ozsoy and her 15-year-old daughter Yagmur Ucar, who died in Sunday’s explosion occurred on Istiklal avenue, attend their funeral in Istanbul, Turkey, Monday, Nov. 14, 2022.

ISTANBUL — Turkish police have apprehended more suspects in connection with the bomb attack on a bustling pedestrian avenue in Istanbul that killed six people and wounded several dozen others, bringing the number of people in custody to 50, Turkey’s justice minister said Tuesday. Sunday’s explosion targeted Istiklal Avenue — a popular thoroughfare lined with shops and restaurants — and was a stark reminder of bombings in Turkish cities between 2015 and 2017 that crushed the public’s sense of security. Turkish authorities blamed the attack on the outlawed Kurdistan Workers’ Party, or PKK, as well as Syrian Kurdish groups affiliated with it. The Kurdish militants groups have, however, denied involvement.

Police carried out raids in Istanbul several hours after the blast and detained 47 people, including a Syrian woman who is suspected of leaving a TNT-laden bomb at Istiklal. Police said the woman, identified as Ahlam Albashir, had crossed into Turkey from Syria illegally and has admitted to carrying out the attack. On Tuesday, Justice Minister Bekir Bozdag said the number of suspects in custody has increased to 50, but did not provide details. “Turkey continues with its fight against terrorism with determination,” the independent T24 news website quoted the minister as saying. “No terrorist organization will succeed in any kind of plot against Turkey.”

Around 80 people were hospitalized following the attack, of whom at least 57 have been discharged. Six of the wounded were in intensive care and two of them were in serious condition, officials said. The six killed in the blast were members of three families and included two girls aged 9 and 15. The Kurdistan Workers’ Party, or PKK, has fought an armed insurgency in Turkey since 1984. The conflict has killed tens of thousands of people since then. Ankara and Washington both consider the PKK a terrorist group, but disagree on the status of the Syrian Kurdish groups, which have been allied with the U.S. in the fight against the Islamic State group in Syria Turkey has been infuriated by U.S. support for the Kurdish militia in Syria, and on Monday, Turkey’s Interior Minister Suleyman Soylu said he rejects messages of condolences from the United States.
…