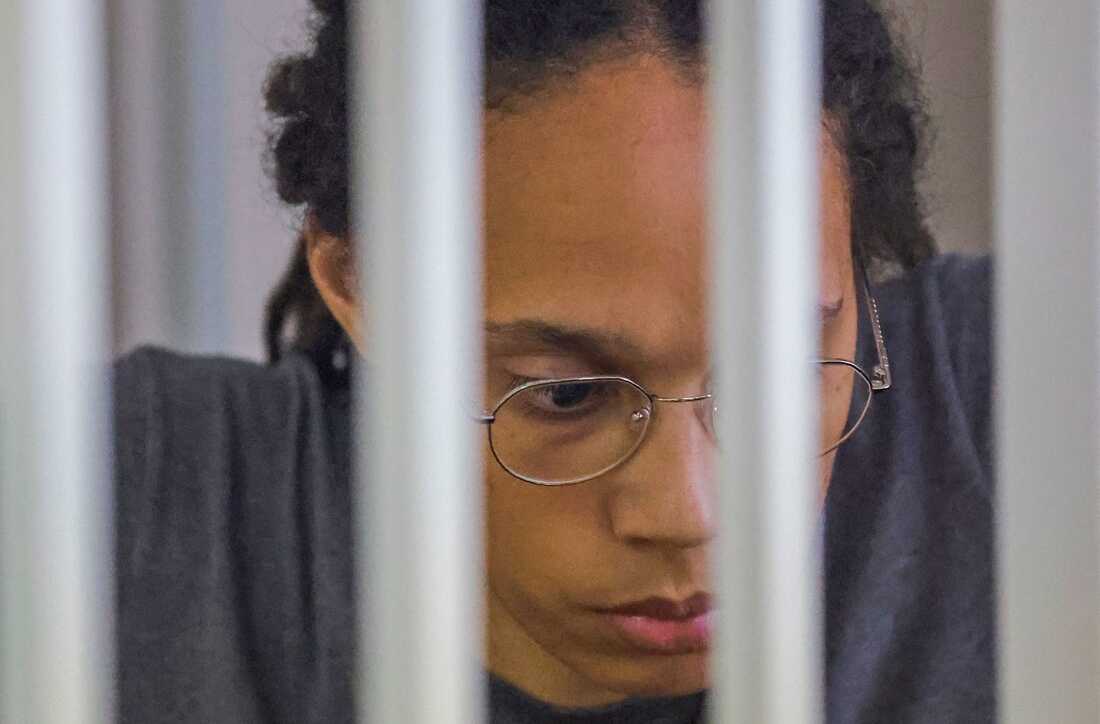 U.S. WNBA basketball player Brittney Griner, who was detained at Moscow’s Sheremetyevo airport and later charged with illegal possession of cannabis, sits inside a defendants’ cage after the court’s verdict during a hearing in Khimki outside Moscow, on August 4, 2022.

Jailed American basketball star Brittney Griner has been moved from a detention center outside of Moscow and is being sent to a Russian penal colony to begin serving out her nine-year sentence on drug smuggling charges, her lawyers said Wednesday. A statement released by Griner’s legal team says they do not have information on Griner’s “exact current location or her final destination.”

The statement also said that in accordance with “standard Russian procedure,” they anticipate Russian authorities will notify Griner’s legal team and the U.S. embassy of Griner’s whereabouts upon arrival at her destination. Russian prison transfers can extend from several days to several weeks. The transfer move follows a Russian appeals court decision that upheld Griner’s conviction on drug smuggling charges last month. The White House assailed the decision as “sham justice” — even as it made clear it continues to work to gain Griner’s freedom through a potential prisoner exchange. “Every minute that Brittney Griner must endure wrongful detention in Russia is a minute too long,” said White House press secretary Karine Jean-Pierre in a statement.

“As the Administration continues to work tirelessly to secure her release, the President has directed the Administration to prevail on her Russian captors to improve her treatment and the conditions she may be forced to endure in a penal colony,” the statement said.

The White House says it made a “substantial offer” over the summer — widely reported to involve a suggested trade of convicted Russian arms dealer Viktor Bout — in exchange for Griner and another jailed American, former U.S. Marine Paul Whelan. White House officials also maintain that Griner’s freedom is an administration priority and repeatedly encouraged Moscow to take the deal or propose a serious counteroffer. In a recent interview with CNN, President Biden said the only reason he would engage with Russian President Vladimir Putin at this month’s G-20 summit in Bali, Indonesia, would be to discuss Griner’s release. Griner was first detained for carrying less than a gram (0.04 oz.) of hashish oil into Russia when she arrived for play in the Russian women’s professional basketball league earlier this year. In August, a Russian court sentenced Griner to nine years in prison. In court, Griner admitted to mistakenly packing two vape cartridges in her rush to pack her luggage — but provided documents that showed the oil was legally prescribed by her U.S. doctor for pain management. She also never failed a drug test.
Yet Griner’s arrest and subsequent trial shadowed the war in Ukraine and cratering U.S.-Russian relations that her supporters say have made her a hostage to geopolitics. Griner’s Russian lawyers also note the American’s nine-year sentence on drug charges was unusually harsh, even by Russian legal standards.
…