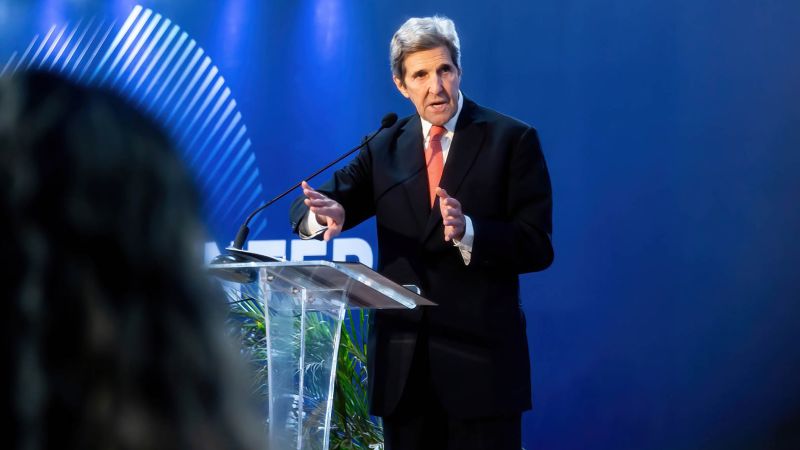 Smith said in a statement that Kerry is “experiencing mild symptoms” and self-isolating at the summit. As the talks hit a critical stretch, he is “working with his negotiations team and foreign counterparts by phone to ensure a successful outcome of COP27.”

It is bad timing for the chief US climate negotiator to fall ill; the final Friday at the annual summit is always crunch time for negotiators to reach a deal that nearly 200 nations can agree to. But this year the issues are particularly thorny – the US represents a major holdout on the critical issue of a loss and damage fund, which would help the world’s developing and most vulnerable countries recover from climate disasters they did little to cause.

Loss and damage is not the only outstanding issue. World leaders at COP27 are also frantically trying to hash out a deal that would safeguard the goal of limiting global warming to 1.5 degrees above pre-industrial levels.

Just hours before the Sharm el-Sheikh summit was officially due to end on Friday – and as the conference venue was being dismantled around negotiators – this year’s COP president Sameh Shoukry said he was “concerned” by the summit’s lack of progress so far.

“I remain concerned at the number of outstanding issues including on finance, mitigation, adaptation, loss and damage and their inter-linkages,” Shoukry told the conference.

“Today, we need to shift gears again. Time is not on our side,” he added.

The Egyptian COP presidency has taken a relaxed approach to Covid-19 at the conference. The organizers did not require participants to be vaccinated or show a negative Covid-19 test when registering, although they “strongly recommended” that attendees be up-to-date with their vaccinations before arriving.

Masks, too, were wholly optional and rare to spot inside the venue – although the number of people wearing them increased noticeably over the past few days.

As the number of people who tested positive grew and the news of a potential outbreak started to spread, more attendees began to mask up. Still, even on Friday, as news of Kerry’s positive test broke, most people remained without masks.

The Chinese delegation stood out by strictly requiring anyone wh …