Wimbledon will allow women to wear colored undershorts, in nod to period concerns 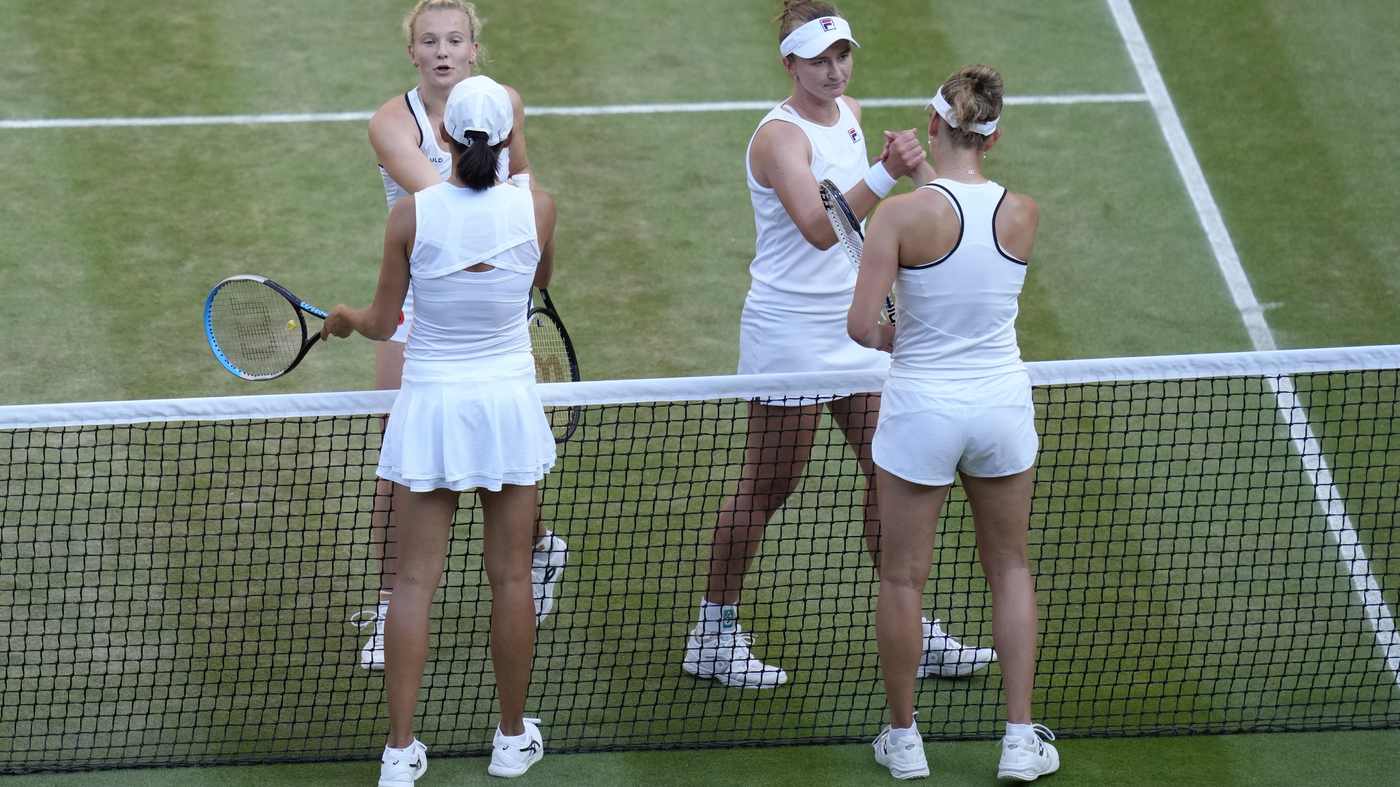 Barbora Krejcikova, top right, and Katerina Siniakova of the Czech Republic, celebrate after beating China’s Shuai Zhang, bottom left, and Belgium’s Elise Mertens during the final of the women’s doubles at the Wimbledon tennis championships in July. Wimbledon is relaxing its requirement for all-white clothing to allow female players to wear colored undershorts.

Wimbledon’s famously strict rules requiring all-white clothing for its players now comes with an exception: female players can wear dark-colored undershorts beneath their skirts or shorts. The change comes after current and former players described the stress of having to wear an all-white ensemble at the tennis tournament while on their menstrual periods. The organizers of Wimbledon said the change comes after discussions with the Women’s Tennis Association, clothing manufacturers and medical teams. “This means that from next year, women and girls competing at The Championships will have the option of wearing coloured undershorts if they choose,” Sally Bolton, chief executive of the All England Club, said in a statement. “It is our hope that this rule adjustment will help players focus purely on their performance by relieving a potential source of anxiety.”

Wimbledon’s dress code dictates that “white does not include off white or cream” and “a single trim of colour around the neckline and around the cuff of the sleeves is acceptable but must be no wider than one centimetre.” Now an asterisk has been added to the rules, permitting female players to “wear solid, mid/dark-coloured undershorts provided they are no longer than their shorts or skirt.”

The Grand Slam rulebook states that “clean and customarily acceptable tennis attire shall be worn as determined by each respective Grand Slam Tournament.” The other Grand Slams are far more liberal than Wimbledon in their assessment of acceptable tennis attire. Players at the U.S. Open, for example, often wear bright and expressive outfits. The menstruation issue had been raised repeatedly by players and others in recent months. Former Puerto Rican player Monica Puig tweeted in May about “the mental stress of having to wear all white at Wimbledon and praying not to have your period during those two weeks,” in addition to how a period can affect a player’s performance. Australian player Daria Saville said she had altered her period specifically because of the tournament’s dress code. “I myself had to skip my period around Wimbledon for the reason that I didn’t want to worry about bleeding through, as we already have enough other stress,” she told The Daily Aus. “Imagine being a swimmer or a ballet dancer,” she added. “Sometimes it just sucks to be a girl.” Likewise, British player Heather Watson told the BBC that she had gone on birth control pills to change her cycle so she wouldn’t have her period during Wimbledon — both for fear of bleeding through her whites, and because of the cramping, bloating and fatigue that are typical period symptoms.

At July’s Wimbledon tournament, a group of protestors wore red undershorts underneath white skirts, holding signs emblazoned with messages including “About Bloody Time.” Somewhat ironically, the rules about white clothing initially began as a measure to prevent sweat stains from showing on colored clothing.

Billie Jean King wears tennis whites in her first-round match against Else Spruyt at Wimbledon in June 1965.

While the issue may have only been discussed publicly in the last few years, the fear of bleeding onto one’s tennis whites is nothing new. “My generation, we always worried because we wore all white all the time,” tennis legend Billie Jean King said in a recent interview with CNN. “An …