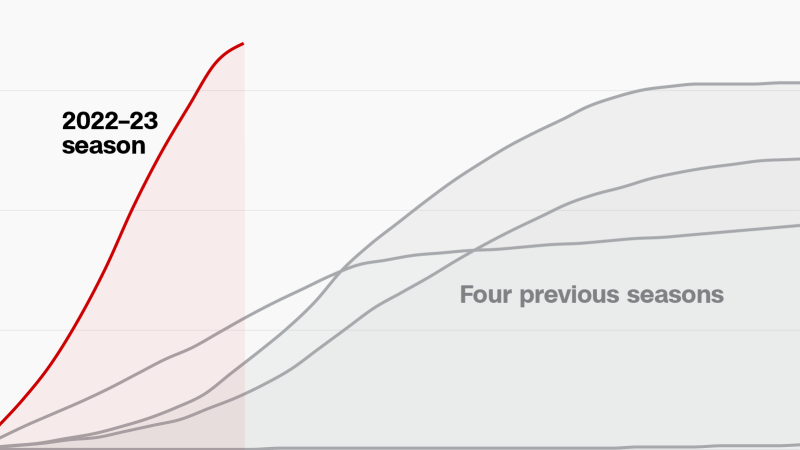 A tough respiratory virus season is underway in the United States, as influenza and the respiratory syncytial virus came early and hit hard this year, straining the nation’s health care system and driving up hospitalizations to rates not seen in years — even as Covid-19 continues spreading across the country.

While this historic season progresses, CNN will be tracking the impact as updated illness figures are released.

Influenza hospitalizations surged this fall: The cumulative hospitalization rate per 100,000 residents, compiled by the US Centers for Disease Control and Prevention, has eclipsed at least five of the past 12 seasons.

While the seven-day rolling average of hospitalization cases derived from US Health and Human Services’ data has come down in recent weeks, experts warn a resurgence is possible as people travel and gather for the holidays.

While Covid levels remain far below prior surges, trends are definitely on the rise across the US, according to data the US Department of Health and Human Services. After a relatively quiet summer, hospitalizations have been on the rise again since early November.

More than 100 million cases have been reported in the United States since the start of the pandemic. However, the actual number of cases is likely much higher, as many individuals who are infected do not test or do not report the results of tests taken at home. As cases are undercounted, hospitalization has become a better indicator of disease trends.

RSV has hit particularly hard and early this season, with a hospitalization rate greater than the previous four seasons already.

Young children are especially vulnerable to RSV, and the virus has a particularly strong impact on children this season. Hospitalization rates for those younger than 5 are more than twice as high as any season since 2018-2019 — when the CDC began tracking data specific to kids.

The flu and other respiratory illness …