‘Good manners are good economics’: UW’s Anthony Gill on the value of giving – University of Washington 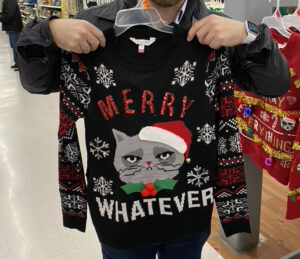 [embedded content]
Everyone has received a gift they didn’t want: the ugly sweater, the ceramic statue, the vase. Items stuffed into the back of a closet, donated or tossed in the trash.
All a waste, right?

Not entirely, says Anthony Gill, professor of political science at the University of Washington. Because it’s not just about the gift, however unwanted it was. It’s about the process of giving, and graciously receiving, that helps society, and more specifically, the economy, go ‘round.
“Gift-giving builds long-term networks, and brings people closer together,” Gill said. “No society can exist without trust, generosity and reciprocity.”
Gill co-wrote, with Michael Thomas of Creighton University, an open-access article on this very topic, published recently in the Journal of Institutional Economics. The idea: Gift-giving is both a social and economic good, regardless of the gift itself. While a gift may go unused (a “deadweight loss,” in economic terms), giving involves sacrifice, ritual, visibility and reciprocity – all practices that promote trust and build relationships, which in turn promote trade and prosperity.
Gill and his co-author penned a poem to summarize their research findings. Watch the video, or click here to read.
“Even in the hardest of times, during a recession or periods of inflation, it doesn’t matter how much you spend, it’s that you’re willing to sacrifice for others,” Gill said.
That can come in the form of an item you buy and wrap, or a contribution or volunteer effort for charity: In the economic sense, giving a gift demonstrates to the recipient a willingness to sacrifice one’s resources to let others know that you are willing to help them in the future.
The market is involved in other giving practices, too – the social ritual, the custom of reciprocating – now or later – and the public nature of, for example, holiday giving. There’s a collective recognition of practices that keep goods and services flowing through the economy, and positive feelings through society.
“The best way to build a strong market economy is to be generous and gracious. These exchanges can’t exist if we don’t trust each other,” Gill said.
And so, the next time you unwrap an ugly sweater, Gill says, it really is the thought – and the process – that count. After all, he says, “good manners make for good economics.”