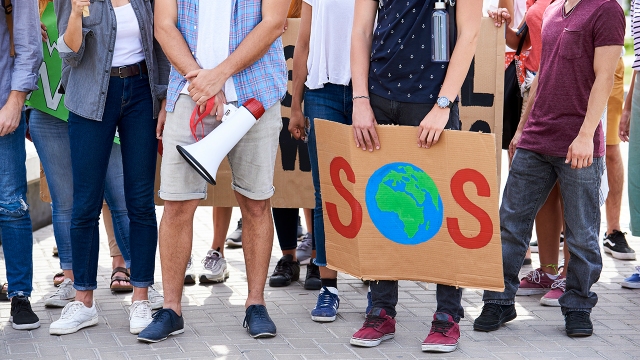 Young people around the world have been at the forefront of climate change protests, and in the United States, adults under 40 are considerably more likely than their elders to express concern about the issue and attribute it to human activity.

This age pattern also exists within major Christian traditions in the U.S., including evangelical Protestants, who are among the groups most skeptical about climate change.

Overall, two-thirds of U.S. adults younger than 40 say global climate change is an extremely or very serious problem, compared with roughly half of those ages 40 and older (52%), according to a recent Pew Research Center survey. Furthermore, 64% of adults under 40 say the Earth is getting warmer mostly because of human activity, such as burning fossil fuels, while fewer than half of older Americans (47%) take that position.

How we did this

Pew Research Center conducted this survey to explore the relationship between Americans’ religious beliefs and their views about the environment – including differences by age. For this report, we surveyed 10,156 U.S. adults from April 11-17, 2022. All respondents to the survey are part of Pew Research Center’s American Trends Panel (ATP), an online survey panel that is recruited through national random sampling of residential addresses. This way nearly all U.S. adults have a chance of selection. The survey is weighted to be representative of the U.S. adult population by gender, race, ethnicity, partisan affiliation, education, religious affiliation and other categories. For more, see the ATP’s methodology and the methodology for this report.

Here are the questions used in this analysis.

These age gaps are not unique to evangelicals. For instance, around two-thirds of U.S. Catholic adults under 40 (66%) say the Earth is warming because of human activity, while half of older Catholics share this view. Among religiously unaffiliated Americans – a group that is more concerned than Christians as a whole about climate change – young people again are especially concerned. (The survey did not include large enough samples of members of non-Christian groups to analyze age categories within them.)

Views toward climate change are even more closely tied to political party than to religion or age, with Democrats and Democratic-leaning independents much more likely than Republicans and Republican leaners to express high levels of concern. Still, among Republicans, adults under 40 are considerably more likely than those ages 40 and older to say that climate change is an extremely or very serious problem (35% vs. 21%) and that the Earth is getting warmer mostly because of human activity (38% vs. 19%). The age gap is not as pronounced among Democrats, with large majorities of both younger and older Democrats expressing these views.

Just 5% of U.S. adults under 40 are both highly religious and concerned about climate change, compared with 9% of those ages 40 and older. (In this study, “highly religious” is defined as those who say they pray each day, attend religious services at least weekly and consider religion to be very important in their lives.)

Adults under 40 are far more likely than older Americans to both have a low level of religious commitment and be concerned about climate change. This is true for 27% of U.S. adults ages 18 to 39 – about double the share of those ages 40 and older in this category (13%).