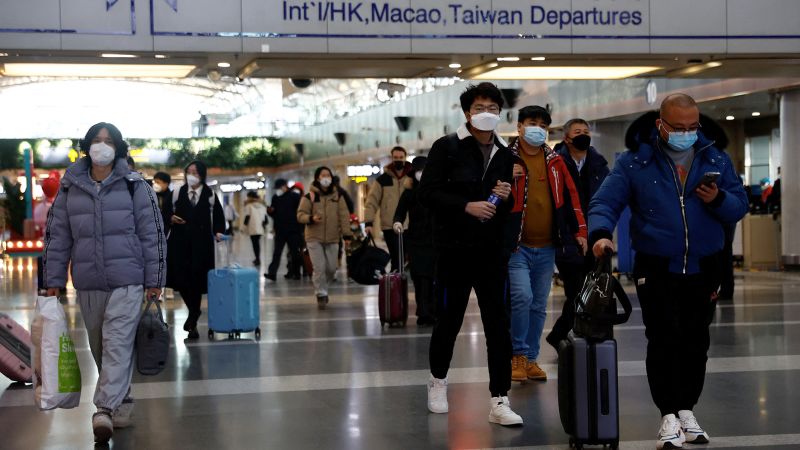 The United States will require all travelers from China to show a negative Covid-19 test result before flying to the country as Beijing’s rapid easing of Covid-19 restrictions leads to a surge in cases.

Passengers flying to the US from China will need to get a test no more than two days before flying, federal health officials said, and present proof of the negative test to their airline before boarding.

The tests can be either a PCR test or an antigen self-test administered through a telehealth service.

Passengers who test positive more than 10 days before their flight can provide documentation of their recovery in lieu of a negative test result.

American officials have expressed deep concerns about China’s lack of transparency surrounding the most recent surge in cases, particularly the absence of genome sequencing information that could help detect new strains of the coronavirus.

“We know these measures will not eliminate all risk or completely prevent people who are infected from entering the United States,” a federal health official said. Still, “taken together they will help limit the number of infected people and provide us an early warning about new variants.”

US health officials said the January 5 timeline was selected to provide airlines with ample time to adjust operations to implement the new rules. The officials did not estimate how long they expect these rules to remain in place, saying they would “monitor the situation on the ground and adjust as needed.”

Additionally, officials announced that the US Centers for Disease Control and Prevention is expanding the Traveler-based Genomic Surveillance program to airports in Seattle and Los Angeles, bringing the total number of airports participating to seven with approximately 500 weekly flights from at least 30 countries covered. This will include approximately 290 weekly flights from China and surrounding areas.

“We’re expanding that to hopefully to pick up any variant that may emerge” as well as “to reduce transmission of a new variant by introducing this pre-departure testing program,” an official said.

The new requirement comes as Japan and India have announced Covid-19 measures for travelers from China amid concerns over an uptick in cases.

Japan is requiring individuals traveling from China be tested for Covid-19 upon arrival starting December 30. Indian authorities have said travelers from China, Japan, South Korea, Hong Kong and Thailand will have to show proof of a negative Covid-19 test on arrival to India and quarantine if they test positive.

China has started loosening its strict Covid-19 measures after dismantling the country’s long-held zero-Covid policy earlier this month. On Monday, China announced it will end quarantine requirements for international arrivals from January 8, marking a major step toward reopening its borders.

But the sudden end …