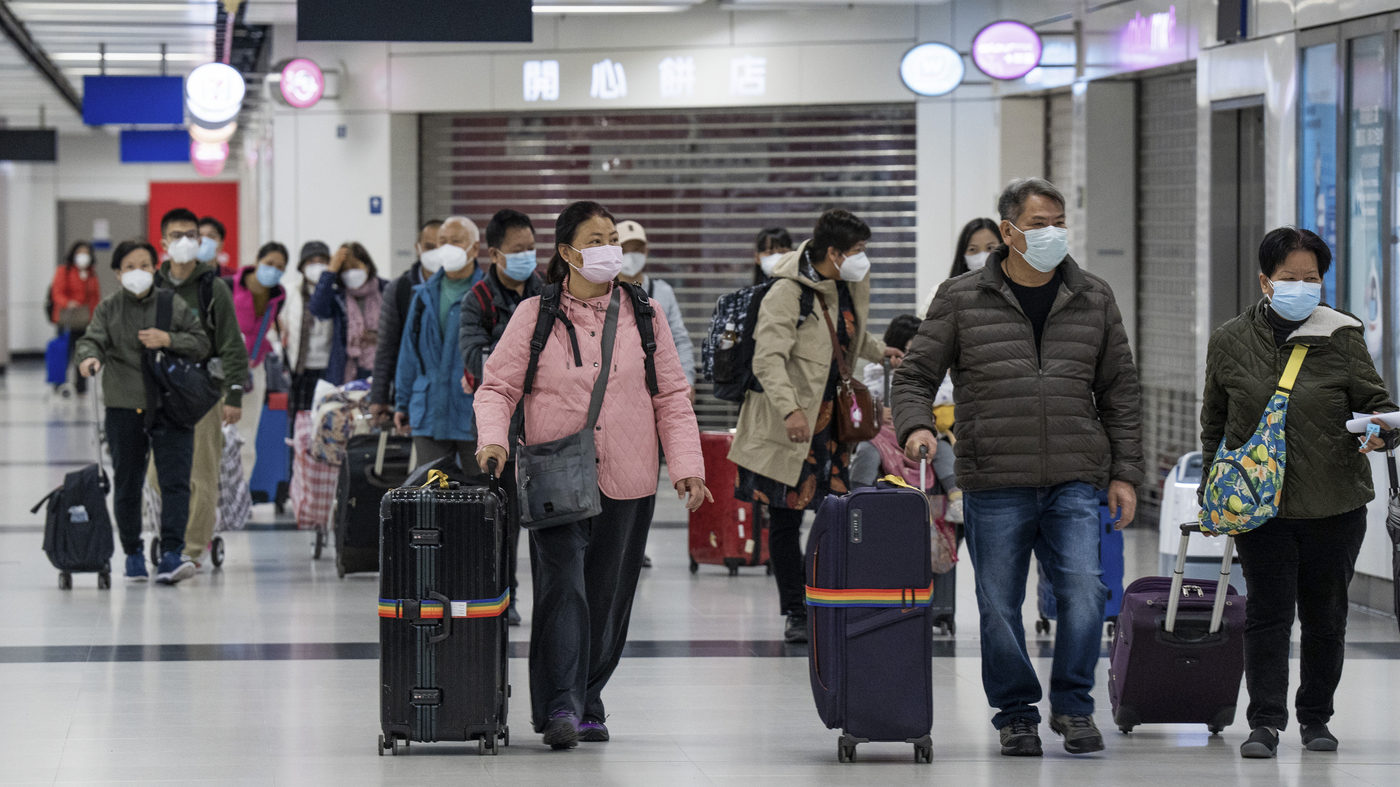 Travelers wearing face masks with their luggage head to the immigration counter at the departure hall at Lok Ma Chau station following the reopening of crossing border with mainland China, in Hong Kong, Sunday, Jan. 8, 2023.

After years of separation from his wife in mainland China, Hong Kong resident Cheung Seng-bun made sure to be among the first in line following the reopening Sunday of border crossing points. The ability of residents of the semi-autonomous southern Chinese city to cross over is one of the most visible signs of China’s easing of border restrictions imposed almost three years ago, with travelers arriving from abroad no longer required to undergo expensive and time-consuming quarantines. That comes even as the virus continues to spread in China amid what critics say is a lack of transparency from Beijing. “I’m hurrying to get back to her,” Cheung, lugging a heavy suitcase, said as he prepared to cross at Lok Ma Chau station, which was steadily filling with eager travelers.

Those crossing between Hong Kong and mainland China, however, are still required to show a negative COVID-19 test taken within the last 48 hours — a measure China has protested when imposed by other countries. Hong Kong has been hit hard by the virus, and its land and sea border checkpoints with the mainland have been largely closed for almost three years. Despite the risk of new infections, the reopening that will allow tens of thousands of people who have made prior online bookings to cross each day is expected to provide a much-needed boost to Hong Kong’s tourism and retail sectors.

On a visit to the station Sunday morning, Hong Kong’s Chief Executive John Lee said the sides would continue to expand the number of crossing points from the current seven to the full 14. “The goal is to get back as quickly as possible to the pre-epidemic normal life,” Lee told reporters. “We want to get cooperation between the two sides back on track.” Communist Party newspaper Global Times quoted Tan Luming, a port official in Shenzhen on the border with Hong Kong, saying about 200 passengers were expected to take the ferry to Hong Kong, while another 700 were due to travel in the other direction, on the first day of reopening. Tan said a steady increase in passenger numbers is expected over coming days. “I stayed up all night and got up at 4 a.m. as I’m so excited to return to the mainland to see my 80-year-old mother,” a Hong Kong woman identified only by her surname, Cheung, said on arrival at Shenzhen, where she was presented with “roses and health kits,” the paper said. Hong Kong media reports said around 300,000 travel bookings from the city to mainland China have already been made, with a daily quota of 60,000. Limited ferry service also was restored from China’s Fujian province to the Taiwanese-controlled island of Kinmen just off the Chinese coast.
The border crossing with Russia at Suifenhe in the far northern province of Heilongjiang also resumed normal operations, just in time for the opening of the ice festival in the capital of Harbin, a major tourism draw. And at Ruili, on the border with Myanmar, normal operations were resumed after 1,012 days of full or partial closure in response to repeated outbreaks blamed partly on visitors from China’s neighbor. So far, only a fraction of the previous number of international flights are arriving at major Chinese airports. Beijing’s main Capital International Airport was expecting eight flights from overseas on Sunday. Shanghai, China’s largest city, received its first international flight under the new policy at 6:30 a.m. with only a trickle of others to follow. Since March 2020, all international passenger flights bound for Beijing have been diverted to designated first points of entry into China. Passengers were required to quarantine up to three weeks. “I’ve been under isolated quarantine for six times in different cities (in mainland China),” said Ivan Tang, a Hong Kong business traveler. “They were not easy experiences …