In India, deity decorating a calling for Hindu temple artist 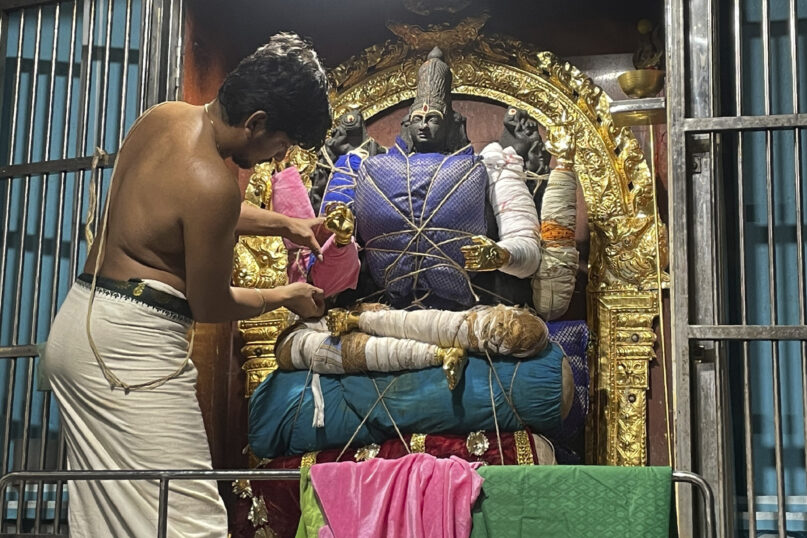 CHENNAI, India (AP) — The former computer professional — now a very specialized type of artist — locked his gaze on the deity before him.On a recent afternoon, 33-year-old S. Goutham was perched on a ladder at the altar of the goddess Durga at the Anantha Padmanabha Swamy Temple in Chennai, India. Goutham — his hand moving steadily — was pleating a green silk sari to adorn the deity.
“You cannot get tense when you are doing this work,” he says. “You can’t do this if you are not patient. You need to become one with her.”
A computer science graduate, Goutham quit his job nearly a decade ago to pursue his calling. He has since followed in the footsteps of his ancestors as a fifth-generation decorator of temple deities.
In Hindu temples, idols are mostly made of materials such as black granite, white marble or five-metal alloys that have sacred significance. These deities are worshipped as physical, tangible representations of god (Brahman) who is believed to be infinite, omnipresent and beyond comprehension. Worship in a Hindu temple includes bathing these deities in milk, decorating them with colorful clothes, flowers, perfumes such as sandalwood, jewelry, and even weapons such as swords, clubs and tridents. Oil lamps are lit at …