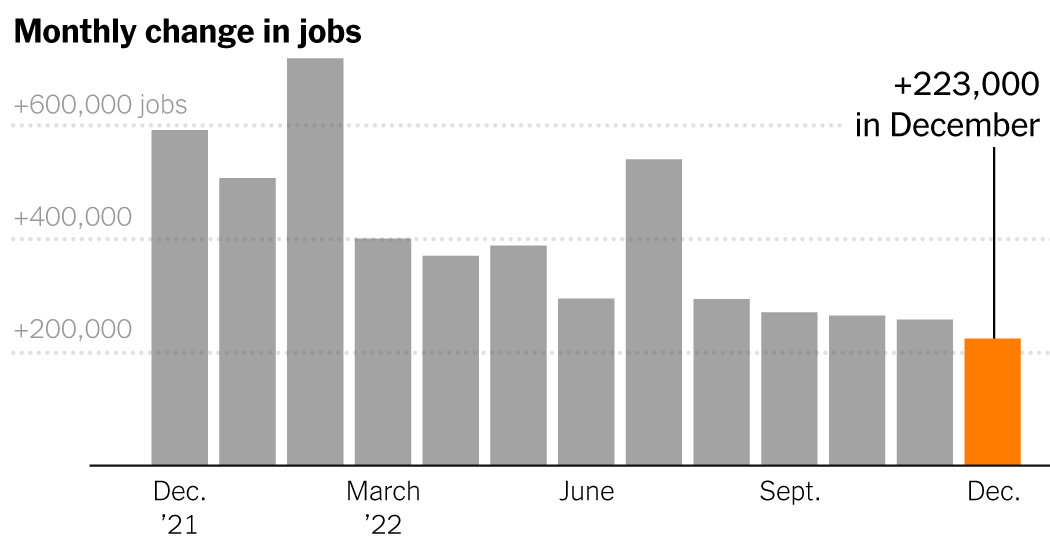 For investors and policymakers alike, bad news may be good news when it comes to the job market.Stocks rose on Friday after new data showed that hiring continued at a healthy pace in December, but wages rose more slowly than economists had forecast, taking the pressure off the potential impact rising wages have on overall inflation.The S&P 500 rose 2.4 percent in afternoon trading. Coming after a sluggish start to 2023 for Wall Street, the rally meant the index was set to end the first trading week of the year with a modest gain.The Labor Department reported that employers added 223,000 jobs in December and the unemployment rate dropped to 3.5 percent. Average hourly earnings picked up by 4.6 percent, which was less than forecast and below the November figure of 4.8 percent, which had been revised downward.Investors have been focused on labor market data as they try and predict the path of interest rates. The Federal Reserve last year raised interest rates rapidly in an attempt to pull down stubbornly high inflation by slowing the economy.Toward the end of the year, data began to suggest that inflation may have started to moderate. However, the labor market remains a crucial piece of the puzzle, with intense competition for workers pushing wages higher and stoking inflation. In other words, a strong labor market has been bad for the Fed’s mission to bring down inflation.So the easing pace of wage growth was welcomed on Friday by stock investors eager for the end of the Fed’s interest rate increases, which have raised costs for companies and helped drag stock prices lower. Lisa Cook, a Fed governor, said in a speech on Friday that “recent data suggest that labor-compensation growth has indeed started to decelerate somewhat over the past year.” Investors have begun to revise their expectations downward for how high Fed officials will raise rates and how long they will keep borrowing costs elevated.The two-year Treasury yield, which is sensitive to changes in Fed policy, tumbled on Friday, trading at just under 4.3 percent. Investors are now betting on a quarter-point increase in rates at the Fed’s next meeting in February, a step down from December’s half-point rise, which was already a drop from the jumbo three-quarter-point increases that came at the previous four meetings. The Fed’s key policy rate is currently set in a range of 4.25 to 4.5 percent.The Fed has warned investors of getting ahead of themselves and making assumptions about the end of the Fed’s campaign against inflation before it’s actually over. Rising stock prices and falling borrowing costs based on signs of falling inflation enrich investors, increasing economic demand that can end up juicing inflation.“An unwarranted easing in financial conditions, especially if driven by a misperception by the public of the committee’s reaction function, would complicate the committee’s effort to restore price stability,” noted minutes of the Federal Reserve’s December meeting released this week.Thomas Barkin, the president of the Richmond Fed, repeated the central bank’s commitment to tackling inflation on Friday, referencing an episode 50 years ago in which price increases took off and stayed high for years. “The experience of the ’70s showed that if you back off on inflation too soon, it comes back stronger,” he said.For some investors, that raises the possibility of a more severe economic downturn, as the Fed’s determination to vanquish inflation risks tipping the economy into recession.Analysts have been lowering their expectations for the next round of corporate earnings, forecasting the first earnings contraction since the third quarter of 2020, according to research company FactSet.“With the record-low unemployment rate indicating that there is still so much work ahead of them, Fed policy rates are set to rise above 5 percent within just a few months, and a hard landing looks to be the most likely outcome this year,” said Seema Shah, the chief global strategist at Principal Asset Management. “The recession clock is ticking.”Jeanna Smialek and Ben Casselman contributed reporting. …