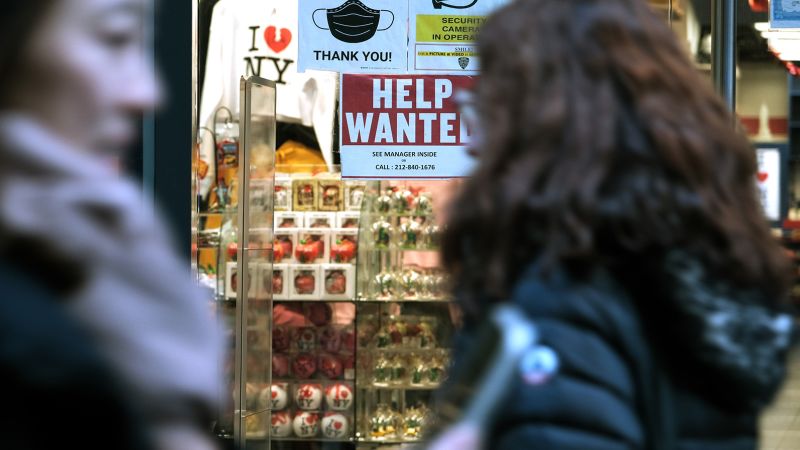 The number of available jobs in the United States totaled 10.46 million in November, according to data released Wednesday by the Department of Labor.

That’s more than the 10 million total job openings that economists were expecting, according to Refinitiv, and slightly lower than the upwardly revised October total of 10.51 million.

“The US labor market remains on fire,” Nick Bunker, head of economic research for Indeed Hiring Lab, said in a statement about the latest Job Openings and Labor Turnover Survey, or JOLTS. “The flames may have receded a bit from the highs of the initial reopening of the economy, but demand for workers remains robust and workers are seizing new opportunities.”

There were still about 1.7 job openings for each job seeker in November, unchanged from October, according to data from the Bureau of Labor Statistics. The Federal Reserve closely monitors this ratio, since tightness in the labor market means employees have greater leverage to seek higher wages, which in turn drives up inflation.

The robust number of job openings remains “a testament to the resilience of demand for labor on Main Street, even as job openings tumbled on Wall Street,” said Julia Pollak, chief economist with ZipRecruiter, in a tweet posted shortly after the report was released.

Job hiring inched down to 6.06 million in November from 6.11 million in October, according to the report. Layoffs fell to 1.35 million from 1.45 million, and the number of people quitting their job increased to 4.17 million from 4.05 million.

“The Great Resignation is far from over — quits surged in November, to 4.2 million,” Pollak said. “They have now been above 4 million for 18 straight months, after coming in at 3.4 million before the pandemic and averaging 2.6 million in the prior years.”

Although openings came in above expectations, the JOLTS report likely won’t spur a dramatic change in course from the Fed, economists for labor market analytics company Lightcast said during a webcast Wednesday morning.

“This report shows more positive signs for the economy than originally expected,” said Bledi Taska, Lightcast’s chief economist. “This was a very surprising report, but in some ways that’s positive for the economy overall. This report moves us from cautious to cautiously optimistic. I don’t expect to have to use the word recession any time soon.”

Labor turnover activity this month will provide a good window of where the labor market may be heading, Taska said, adding that he would expect layoff …