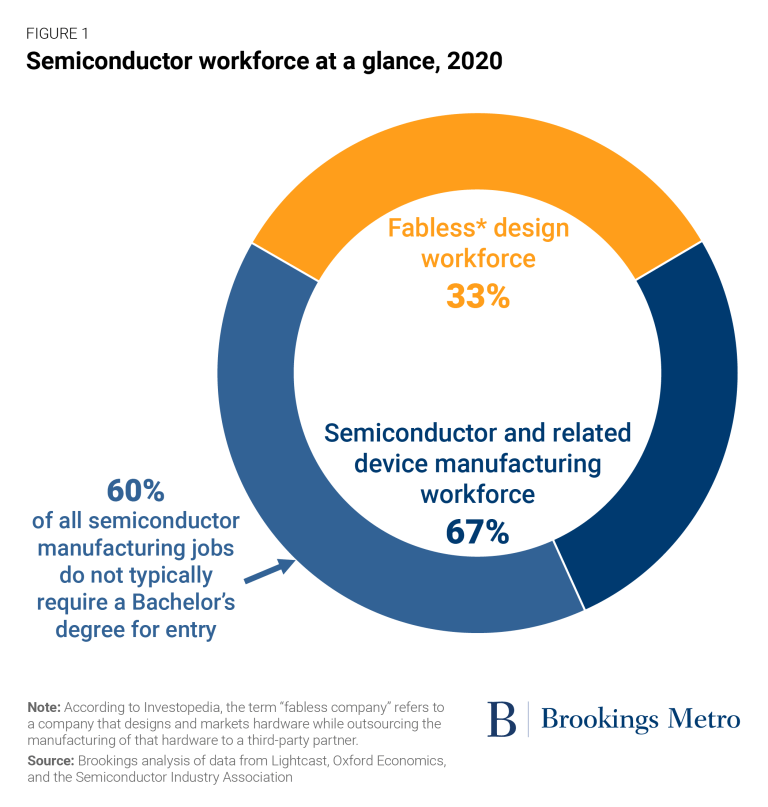 One of the most auspicious aspects of the Biden administration’s surge in industrial policy legislation is the possibility of creating thousands of new, accessible, and tech-related blue-collar and “new-collar” jobs for people without college degrees.

The potential for such work has been most widely championed in the context of the Infrastructure Investment and Jobs Act and the Inflation Reduction Act. Less noticed, though, is the potential of last summer’s CHIPS and Science Act, which seeks to reignite domestic semiconductor manufacturing after decades of offshoring.
Through the CHIPS and Science Act, the subsidiary CHIPS Act of 2022 appropriates $39 billion to subsidize the construction or expansion of U.S. fabrication plants for both leading-edge logic and memory components as well as mature-technology semiconductors. This has already prompted multibillion-dollar investments in Columbus, Ohio, Syracuse, N.Y., and other areas. Such manufacturing facilities promise a solid source of good jobs—including for people with fewer formal degrees, lower-income people, and people in non-coastal areas of the U.S.
But achieving such outcomes depends on what might be one of the hardest transformations for the U.S. to achieve in the semiconductor field: a major surge of national, state, and local actions to expand, train, and diversify regional workforces to ensure more workers can participate in the industry’s growth.
Building new semiconductor manufacturing plants will not by itself produce accessible pathways for local workers and meet employer demand. Instead, regions must organize themselves, leverage existing assets, and build stronger employer-education-government links that create the pathways needed to ensure local workers truly benefit from the semiconductor opportunity.
What follows provides a look at the nature of the semiconductor workforce opportunity, as well as early signals on preparing for that opportunity in the Columbus, Ohio area, where the first major use of CHIPS Act subsidies has triggered planning for an industry-relevant workforce development system.
Semiconductor jobs are surprisingly accessible
The idea that onshoring more computer chip production might benefit historically marginalized communities and less highly credentialed workers remains a point of contention for many.
High-tech work of any sort is frequently assumed to involve complex software development or data analysis, and therefore thought to be exclusive. What’s more, the workforce discussion in the semiconductor industry has tended to focus less on technicians and more about the need for attracting immigrant Ph.D.s and getting more students into STEM fields to support high-end design processes. Broader discussions about pathways for underrepresented workers into the industry haven’t often been prominent.
Yet fabrication plant work holds out real promise for workers who lack formal degrees but are interested in increasing their pay by upskilling with specific credentials and certificates. While one-third of semiconductor industry jobs reside in higher-skill design activities, two-thirds—some 187,000 workers—are in the manufacturing workforce, according to Brookings Metro analysis of Bureau of Labor Statistics data.

These jobs—including thousands of technicians to oversee and manage the manufacturing process—are significantly more accessible than design jobs in terms of their degree requirements (though significant levels of technical skills are often needed). In fact, across the manufacturing side of the industry, 60% of jobs don’t require a bachelor’s …