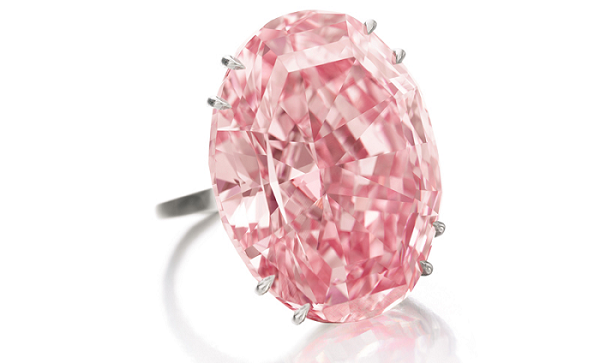 After a false start of sorts – albeit one that broke all previous records – “The Pink Star”, a unique, 132.5-carat colored diamond, will go on the Sotheby’s auction block in Hong Kong on April 3, an event eagerly anticipated by investors, dealers and connoisseurs.

“The Pink Star” is the largest, internally flawless fancy vivid pink colored diamond ever to be graded by the Gemological Institute of America. Mined by DeBeers in 1999 in Botswana, it was polished over a two-year period into a remarkably large, oval-cut diamond.

This is the second time in recent years that “The Pink Star” has been put on the Sotheby’s block. In late 2013, it commanded a breathtaking $83.2 million, a winning bid by a consortium led by New York diamond cutter Isaac Wolf. The group subsequently reneged, however, and the auction house reportedly bought it for the price it had guaranteed the original seller: $60 million.

Today, Sotheby’s puts the value of the diamond at $72 million.

“Colored diamonds have been rising in price and popularity,” Paragon International Wealth Management’s Michael King continued. “High priced purchases by investors have become increasingly common as the luxury markets continue to boom. So, many see this sale as an interesting indicator of future pricing trends.”

According to Wealth Report, an annual publication of London-based property broker Knight Frank, prices of colored diamonds have escalated by 120% over the last decade. That’s below gains experienced over the same period by such other luxury items as vintage cars (up 460 percent) and classic wines (a 240 percent increase). But then, those sorts of items also don’t command the same number of total dollars.

And when it comes to the individual types of fancy colored diamonds, the pink are at the pricing pinnacle. Between 2009 and 2016, reports Tel Aviv’s Fancy Color Research Foundation, pink diamonds have seen prices increase by almost 180 percent (to a record high). During that period, blue diamonds are up by 70 percent; yellow, 90 percent.

It all comes together to create huge interest in how the bidding will play out at Sotheby’s auction in Hong Kong.  “The Pink Star” is one of the most valuable diamonds ever to be auctioned, well ahead of the 14.62-carat Oppenheimer Blue, which commanded more than $57.5 million when auctioned by Christie’s in 2016.

“The Pink Star”, graded as Type IIa, is twice the size of “The Graff Pink”. Known for its hue and size (24.78 carats), this diamond was part of renowned jeweler Harry Winston’s private collection for over 60 years. It was acquired at auction by the legendary diamond collector Laurence Graff for $46 million in 2010 – making it then the most expensive diamond in the world.

“The Pink Star” has shattered numerous records with its size, perfection and, of course, the price it commanded in the 2013 auction. The question is whether 2017 will see a repeat of that performance.