Anyone Can Easily Find Plastic “Islands” in the Ocean 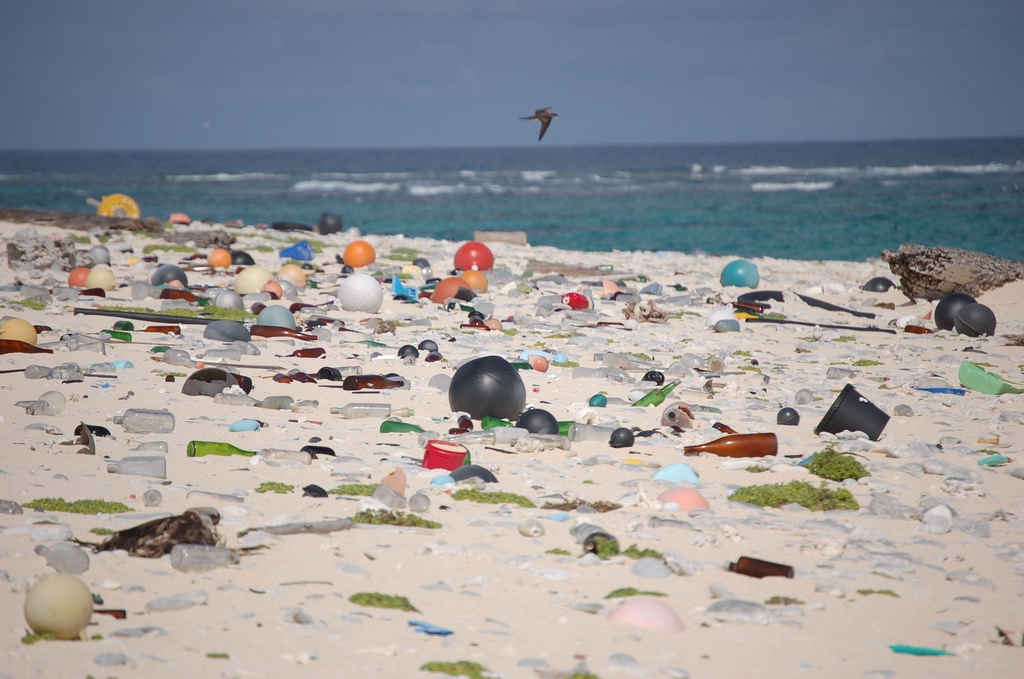 We use plastic every day of our lives — from grocery bags to fast food soda cups, plastics are an integral part of just about every industry.  While a versatile tool, they also take a long time to biodegrade, if they do at all, making them a problem for the planet. Landfills all over the globe fill up with plastics that sit there and take up space — and what doesn’t make it to the landfills ends up in the ocean, where it’s carried by currents to form ‘islands’ of plastic waste.

Just how hard is it to find one of these floating plastic faux islands? It’s easier than you think.

We all know that plastic items float — its part of their charm and in many cases (such as boat-friendly items) part of their usefulness as well. The plastic that ends up in the ocean floats on or near the surface and is picked up in the currents.  In the Pacific Ocean specifically, it collects in massive spinning ‘islands’ known as gyres. There are a number of these gyres floating in places around the Pacific Ocean, but they’re generally referred to collectively as the “Great Pacific Garbage Patch.”

There are some differences in the type of plastic waste found in the Pacific ocean — northern gyres tend to be made up of commercial waste — plastic water bottles, grocery bags, etc., — while the southern gyres are more often made up of industrial waste, specifically from the fishing industry.

With the garbage patch spanning so much of the Pacific Ocean, you might think that it’s easy to find — but it’s not always as easy to see as you might think. Plastics, when exposed to ocean water, don’t break down like other materials. Instead, they fall apart, breaking into smaller and smaller pieces until they can no longer be seen with the naked eye.

One of the bigger gyres, the Eastern Garbage Patch, lies off the southern coast of California.  You’ll have to look very closely to see much of the plastic in that patch — while there are some large items as well, most of them have been broken down by the ocean’s movement and are very difficult to see.

Just because the sheer amount of plastic isn’t visible to the naked eye doesn’t mean it’s not a problem. Some scientists who are researching the patches have found that in areas where these plastics are prevalent in the water, fish have more plastic in their stomach than they do food.

This might seem like a dire situation — and it is — but there is also hope. Now that we’ve realized what a problem these garbage patches are, researchers have started taking steps to both remove the garbage patches and to reduce the number of nonbiodegradable plastics being dumped into the ocean every year.

The Ocean Cleanup, a Dutch group studying the garbage patches, is ready to start making changes as early as next year.  Their cleanup program involves releasing a number of screens, each just over a half mile in length, that will drift and collect the plastics in the garbage patches.  They’re designed to float along the same currents that carry the plastic, so they won’t wander aimlessly in search of plastic to collect.

On the land based side of things, researchers at MIT have found a bacterial enzyme that can produce both hard and soft plastics which will biodegrade instead of just breaking into smaller and smaller pieces. It’s not ready for commercial production as of yet, but once it’s been perfected, it could easily change the way we look at plastic.

We’ll never stop using plastic, at least not until we can come up with something cheaper that works just as well.  In the meantime, it’s up to us to clean up the mess we made and figure out better ways to prevent plastics from cluttering up the oceans and killing the fish populations.  We made this mess — we need to clean it up.