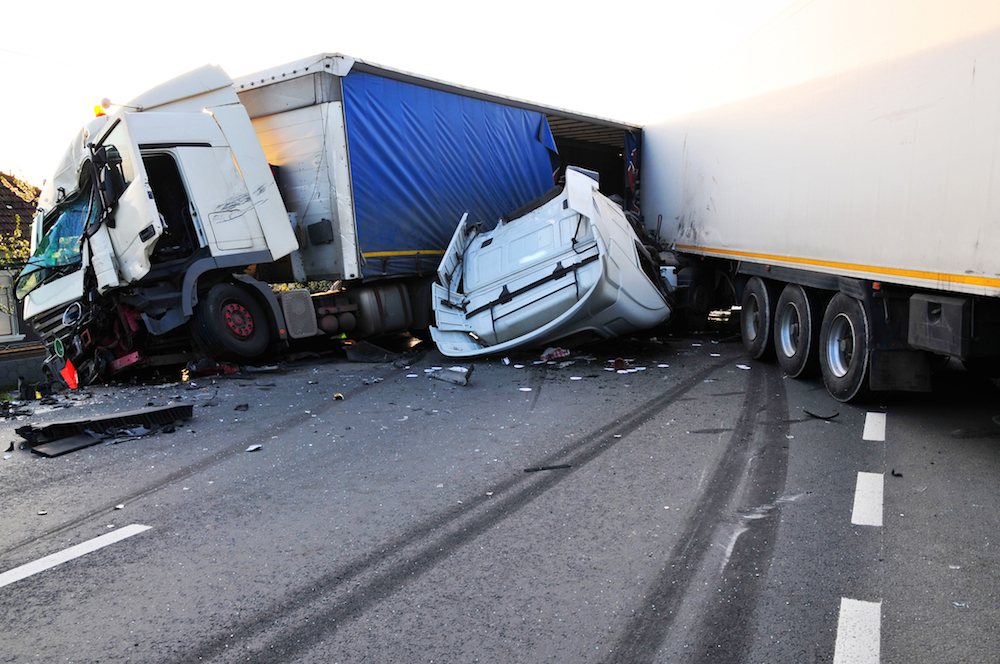 A Look at the 5 Leading Causes of Truck Accidents

The legal weight for an eighteen-wheeler or semi truck is 80,000 pounds. In comparison, the average automobile weighs just 5,000 pounds.

When a truck weighing 16 times as much as the average vehicle becomes involved in a collision, the result can be deadly. Understanding the most common causes of trucking accidents may help to prevent more in the future.

There is no singular cause of roadway accidents, but a handful are responsible for the majority. This is certainly true in the case of trucking accidents, even though there are thousands every year. Take a look at the top five:

Speeding is a problem for all classes of highway vehicles, but it’s obviously more dangerous when trucks are involved. Speeding trucks require a lot more force to brake, which is that much more difficult when thousands of pounds of cargo are also involved.

“Distracted driving is a widespread problem on our roads, which has led to regulations adopted by the Federal Motor Carrier Safety Administration (FMCSA) prohibiting commercial truck drivers from using cell phone and similar devices while behind the wheel of a tractor-trailer,” Gruber Law Offices explains.

“Truckers know the danger caused by distracted driving, yet it remains a leading cause of truck accidents.” To be honest, distracted driving is a serious problem for every kind of driver — automobiles included — but the size and weight of tractor-trailers makes the results a lot more catastrophic when truckers get diverted by texting, fiddling with the radio, eating, or reaching for dashboard controls.

Another way drivers get distracted is when they don’t get enough sleep. Prior to the FMCSA rule on electronic logging devices, truckers were driving too many hours and going over their allotted hours of service. Now, ELD devices help regulate the 14-hour rule for on-duty time.

According to data collected by FMCSA, 10 percent of trucking accidents involve vehicle failure. The most common problem is brake failure, though other issues such as blown tires, worn rotors, and overheating issues are also factors.

The best way to avoid vehicle failure is by performing excellent vehicle maintenance. To keep up with the significant wear and tear on trucks, drivers and trucking companies need to invest in regular inspections and preventive maintenance.

Brakes should be replaced before they become a problem. Tiny cracks in the windshield should be addressed before they spread. Fluids ought to be topped off before every trip. Little steps like these go a long way toward ensuring safety.

According to one study, the majority of trucking accidents are caused by driver error on the part of passenger vehicles. Specifically, the data show that out of 6,131 fatal car-truck crashes, private cars were to blame 81 percent of the time. Trucks were at found to be at fault in only 22 percent of the cases.

If these statistics are accurate, truck drivers should train to become better defensive drivers. By learning to maintain safe distances from other vehicles and exercise more patience around slow and reckless drivers, truckers could avoid placing themselves and their cargo in dangerous situations.

The biggest issue with large trucks is that they typically have a heavy load behind them. This compounds the inherent challenges that come with operating a heavy vehicle and makes drivers more susceptible to roadway issues.

“Truckers and cargo loading teams have to abide by industry-specific rules when it comes to loading the bed of a commercial truck,” GTG Technology Group notes. “There are certain weight, size, length, width, and height limits to a load, as well as special methods of securing cargo for transportation. Mistakes or negligence during loading procedures can make a load fall off into the road, causing catastrophic accidents.”

Believe it or not, American roadways have become safer over the years. During the late 1960s and the early 1970s, more than 50,000 motor vehicle fatalities occurred each year.

Over the last decade, the figures have ranged between 32,000 and 37,000 per year. On the down side, trucking incidents tend to account for a disproportionate percentage of the fatalities.

It’s more vital than ever that we recognize the causal factors in trucking collisions and do our best to mitigate the threat through safer precautionary measures and smart driving practices. If we can do that, we’ll make America safer for everyone.