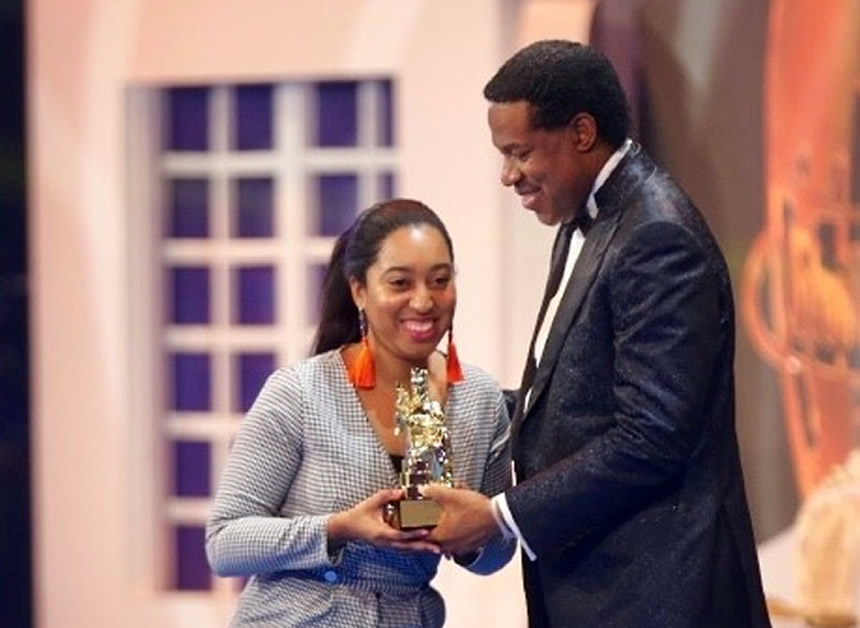 Loveworld Music and Arts Ministry (LMAM) has a brand-new star on the rise and her name is Sharon Carissa Oyakhilome.

Carissa Sharon Oyakhilome, more popularly known as CSO is gospel royalty. The singing sensation who is behind the mega-hit ‘Holy Spirit’, has become a household name since her double win at the Loveworld International Music Awards of 2018 (LIMA).

The annual award ceremony that takes place every November at the end of the International Pastors’ and Partners’ Conference celebrates the multitudinous talents that make up the global community of the Loveworld Music and Arts Ministry. Some of the biggest gospel talents in the world have begun on the Loveworld platforms and CSO is certainly one of them.

Sharon Carissa Oyakhilome is blessed to have been born into the “Loveworld empire.” The singing sensation is the daughter of Pastor Chris Oyakhilome, the founder and leader of the massive global community that is Loveworld Inc, also known as Christ Embassy. The Christian movement spreads the gospel through a number of different channels and as the daughter of the founder of this worldwide and massively influential church, it is only natural that she would live and breathe the Word of the gospel.

Yet Sharon Oyakhilome has done so much more with her fortune. Her unwavering devotion to Jesus Christ has not only inspired her to spread the Word to the masses who are in dire need of salvation, but this ‘Loveworld princess’ has chosen to do so in song, and it is with her uplifting melodies and angelic voice that she is moving listeners around the world.

CSO wrote and performed a song that shot her into worldwide fame. The song had a major impact on millions of listeners around the world and has become a favorite of the church gospel scene. Sharon Oyakhilome has said that her creation came from the Holy Spirit itself and that she just poured out whatever God gave her.

“I wrote this song about the most important person here on earth, the Holy Spirit, and as I was praying and fellowshipping with Him, He gave me the lyrics and the melody.”

“The song is very dear to my heart. I pray and believe that you will be touched by His loving presence and inspired to live a deep and powerful relationship with the loving-kind Spirit of God who reveals to you the presence of the Father and of Jesus Christ Himself!”

Sharon shot the music video in the beautiful country of Switzerland. The video that was produced by YOU Church “emphasizes on what happens when you worship the Holy Spirit. He will take you out of the noisiness of the world and elevate you into His glorious presence.”

CSO’s song ‘Holy Spirit’ earned her a double win at the recent Loveworld International Music Awards. The artist was awarded for both Song of the Year and Worship Song of the Year.  The songbird was bowled over by the win, acknowledging the tough competition out there with LMAM nominees such as Jeannine Zoe Wojacek, Frank Edwards, Kelly Lyon, Pastor Ester Miracle, T-Sharp, Eben and many, many more. Upon receiving it she thanked God and her talented team for guiding her and helping her through the process. The artist then took to Instagram to express her gratitude.

“These awards mean so much to me for several reasons. Sometimes thoughts can come that make you feel small in comparison to others, but God is not necessarily looking for the most powerful vocalist. It is not about how fantastic your voice is or how many riffs and runs you can do. It is not by power, nor by might but by my spirit – saith the Lord”.

According to the gospel music blog, Good Gospel Playlist, CSO had been “dreaming of writing a song that would inspire and motivate the masses to ascend to higher levels of devotion.”

“In 2014, I told myself one day I will write the worship song of the year! And in this year of the supernatural, my first released worship song was deemed worship song of the year! The testimonies that came from this song were unfathomable. I’m grateful to God for every good and perfect gift comes from Him and I’m grateful to my husband for his love, support, and constant encouragement! Thank you all for celebrating me! God bless you.”

For every princess, there is a prince, and this Loveworld sensation certainly found hers. Carissa Sharon Oyakhilome in addition to snatching up music awards, also recently bagged the man of her dreams.

The singer married the Dutch-born entrepreneur, Phillip Frimpong. The two got engaged a little over a year ago and by October last year were married in a beautiful and traditional African wedding. Their proposal went viral and on (of course) saying yes to the man of her dreams, CSO wrote a moving post on Instagram to her fans and to God.

In a declaration of love and excitement, CSO wrote: “YES! I am engaged to my very best friend! The most amazing and my absolute favorite person…I am so, so blessed I would say yes over and over I love you.” A lucky woman indeed.

According to Legit.ng, the white wedding ceremony of Sharon Oyakhilome and Philip Frimpong Photo was attended by the “creme de la crème of the religious and business world.” The unforgettable event was shown live Loveworld TV, the official channel of the church.  Good Gospel Playlist magazine described CSO as “absolutely breathtaking in her elegant bright red sparkling dress and magnificent giant matching beaded necklace.”

Phillip Frimpong who was born in Holland was raised by Ghanaian parents. The wedding had traditional elements of Ghanaian culture with Frimpong donning a colorful Akan style wrap.  For the official ceremony, Sharon walked down in the aisle in a beautiful white off-the-shoulder ball gown with her father and founder of Loveworld Incorporated, Pastor Chris Oyakhilome.

The happily married gospel sensation has a lot up her sleeve in the coming months. According to rumors, she is even working on a new single. Let’s see what this Loveworld princess will bring us next!