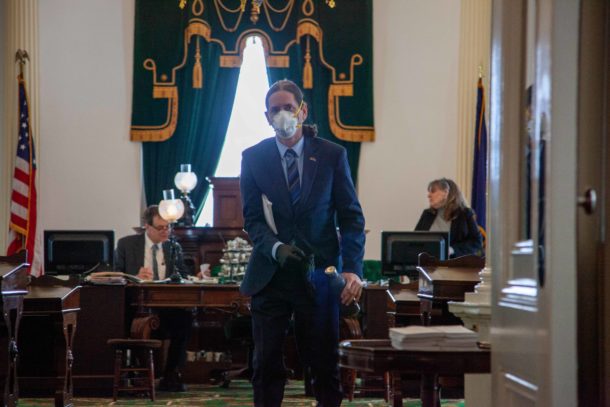 — The Senate reconvened briefly today to pass bills to address the COVID-19 pandemic. They passed a temporary expansion of the state’s unemployment insurance system to include those whose jobs were affected by the coronavirus.

They also passed a comprehensive health care bill, which loosens regulations so that retired and out-of-state health care providers can temporarily practice in Vermont. It also expands the use of telemedicine and gives the state the authority to temporarily delay the provider taxes owed by medical practices and hospitals. – Xander Landen

— To convene for the vote, senators took extra precautions to keep clean and properly socially distanced. In the chamber, most abandoned their assigned seats, spreading out to the room’s couches, window benches and public gallery. Several kept bottles of hand sanitizer on their desks.

Lawmakers arrived at the back door of the Statehouse into what’s known as the Lincoln hallway. Sen. Dick Sears, D-Bennington, opened the door with a blue plastic bag wrapped around his left hand.

“Single use plastics are making a comeback,” he said later, showing it off to colleagues. – Mike Dougherty

— Jeff Tieman, president of the Vermont Association of Hospitals, told lawmakers on a Joint Rules Committee call that he has concerns about the financial viability of all Vermont hospitals as they face financial pressures from the coronavirus crisis.

“There is no doubt at this moment that every single hospital in Vermont, from the University of Vermont Medical Center to Grace Cottage, is vulnerable right now,” Tieman said. He said he’s hoping that phase three of the federal stimulus package will incorporate financial safety nets for “beleaguered” hospitals. – Grace Elletson

— While a rule change vote was expected tomorrow in the House that would give the body remote voting capabilities, those plans have hit a snag. During a House Rules Committee conference call discussion, some members disagreed with the idea of allowing remote voting.

VTDigger is underwritten by:

“We are setting up a very less than adequate alternative that does not uphold a representative democracy,” said Rep. Anne Donahue, R-Northfield. Because the committee could not reach consensus, House Speaker Mitzi Johnson, D-South Hero, said it would continue discussion this evening to work out a proposal. – Grace Elletson

— Chief Fiscal Officer Steve Klein told House Appropriations lawmaker today that because income and meals and room tax deadlines have been pushed back by Gov. Phil Scott, his office expects the state could see a $145 million shift in revenue.

Meaning that instead of the state receiving this revenue by April 15, it would see this revenue by July 15, the next fiscal year. That is, he said, if businesses can still pay by July 15. They may have to defer after that time period as well because of coronavirus financial impacts. – Grace Elletson

— Adam Greshin, commissioner of the Department of Finance and Management, also briefed House Appropriations this morning. And while the revenue projections for the state look dire, he said the state does have a relatively strong reserve fund. The state has almost $230 million in reserves.

But as Pro Tem Tim Ashe, D/P-Chittenden, told reporters this afternoon, while the state has a strong rainy day fund, “This is more than a rainy day.” – Grace Elletson

— Ashe also told reporters at a press conference following Senate floor action that all other bills that don’t have a direct connection to the state’s COVID-19 response will likely stall this session. “Addressing the COVID-19 pandemic is not the top priority, it is the only priority,” he said.

“In the coming weeks, that is the work,” Ashe said. “There are other committees where it might not be emergency legislation, but we need to know how we’re going to get out on the other side of this.” – Grace Elletson

Get Final Reading delivered to your inbox before it’s posted online. Sign up free!