Why Was Toxic Algae Everywhere This Summer? 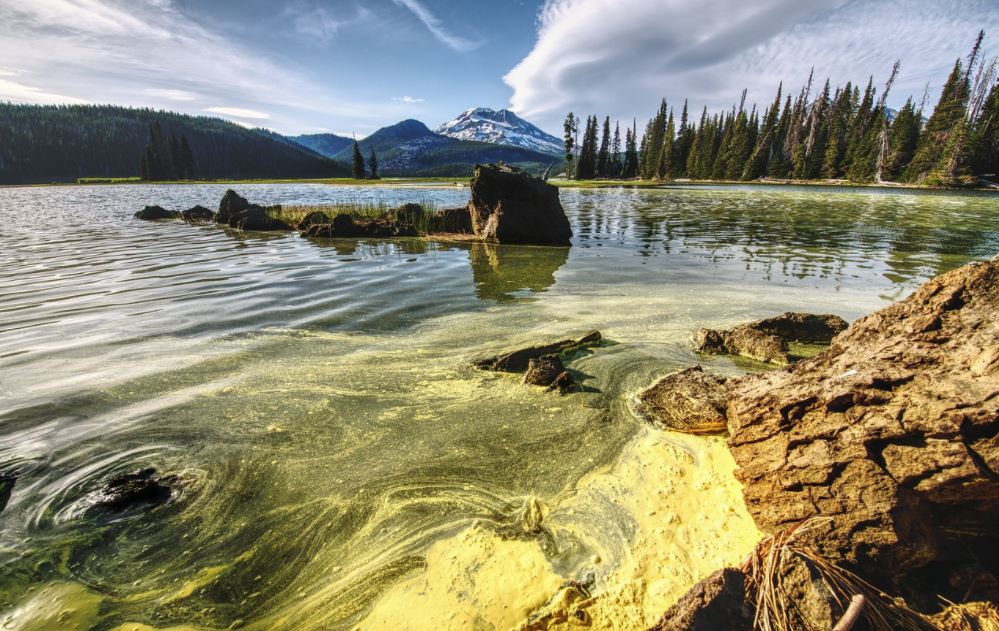 Bacteria often proliferate in stagnant, warm bodies of water, which is sometimes a part of natural ecosystems. Other times, however, this development can be harmful to humans, animals and plants. Toxic algae blooms are a recurring problem that could get worse if officials don’t take action soon.

The blue-green algae blooms that form on stagnant waters across the United States have been increasing for several years. While 2020 saw a slight dip in these blooms, that downward trend must continue to bring about better public and environmental health.

Blue-green algae is a harmful substance. Unfortunately, many cities and towns saw it everywhere this past summer.

How the Toxic Algae Spreads

While some algae species naturally occur in still bodies of water, this form of blue-green algae is not one of them. Algae comes from cyanobacteria, which is a cluster of any aquatic plants that pop up in blooms. Cyanobacteria blooms need slow or stagnant water with plenty of nutrients. Summer creates ideal conditions for these bacteria to flourish, due to their need for warm water.

Then, cyanobacteria can break down and produce toxins that are harmful to humans and fish. These toxins can also be invasive and hurt plant life nearby. Microcystis aeruginosa is the scientific name of the blue-green algae species that’s been everywhere in the U.S. It produces the toxin microcystin.

Toxic algae is not a novel issue. It’s been increasing in bodies of water nationwide for several years now. The culprit that causes these toxins is sewage from households, industries and businesses. Waste infiltrates bodies of water like lakes, ponds and reservoirs, whose stillness allows the blue-green algae to thrive.

Cities and towns had to post warnings around the bodies of water with high levels of blue-green algae blooms. Experts deemed these locations hazardous for humans to swim in, fish in and go boating in. The water is unsafe to drink for humans or pets and can be lethal to the fish that live under the surface.

The effects of blue-green algae include nausea, diarrhea, irritation, liver issues, difficult breathing or even death. With such high-risk health concerns, it’s more imperative than ever to track and reverse the current growth.

Why the Spread Has Increased

In 2014, Toledo, Ohio, became the first major U.S. city to announce that its water had blue-green algae contamination carrying cyanotoxins. Experts quickly deemed the water unsafe for humans and animals, cautioning people to stay away. While this instance wasn’t the first, it made headlines and got the conversation going.

Fast-forward a few years, and 2018 and 2019 saw toxic algae spikes in other states like Iowa, Oregon, New York and Michigan. It lingers in rivers, lakes and reservoirs and stays on the surface, making purifying drinking water difficult. What, then, is causing such harmful bacteria and toxins to form?

Sewage and wastewater are two leading proponents of the spread. In Toledo, officials eventually concluded that industrial agriculture runoff caused the algal blooms. These instances can intensify in periods of heavy rainfall, carrying the harmful runoff into water supplies. With inadequate business or municipal wastewater treatment, the algae has more of a chance to grow.

Another potential source of the spread is through the air. The harmful toxins from the algae can mix with oxygen and become airborne. Though the research on airborne contaminants isn’t as prominent as water infiltration, it still shows how invasive blue-green algae can be.

An overarching effect that contributes to the spread, however, is global warming. Warm water is one of the necessities for this form of algae to thrive. As the climate crisis continues and warms water for extended periods, the blue-green algae has more of a chance to proliferate, infect and spread. To properly account for such an invasive species, officials and governments need to take action on several levels.

According to the Centers for Disease Control and Prevention, over 286 million people in the U.S. get their tap water from a community water system. With so many people relying on water from lakes and rivers, public health cannot afford these toxic algae outbreaks. Household purifiers and cleaners also cannot filter out the algae.

One instance of officials taking action is at Lake Winnebago in Wisconsin. Here, the lake supplies a significant amount of drinking water for residents. Thus, monitoring the blue-green algae blooms and outbreaks is essential for keeping everyone safe. Proper testing, warnings and treatments put towns back on the right track.

However, water infrastructure changes are necessary to account for the rise in these blooms. Since sewage is a direct cause of the algae, every city’s treatment facilities must get more funding. Now, more than ever — with the COVID-19 pandemic still prevalent in the U.S. — public health is a focus.

It’s essential to make sure wastewater treatment facilities and the pipes and sewers connected to homes and businesses are functioning correctly. If not, the runoff will be toxic and harmful to the environment.

Of course, addressing the climate crisis is more challenging, but still necessary. Experts and scientists have been emphasizing the need to act soon in response to global warming. Making sustainable switches like using renewable energy or electric vehicles is how to effect large-scale change. It will then bring about countless benefits, like slowing the spread of toxic blue-green algae.

Summer brings around the peaks of these blue-green algae blooms. The warm weather heats bodies of water. Then, runoff from sewage or industrial locations adds harmful toxins. With global warming, this algae may be staying around for years to come — which is why immediate action can help.

The downward trend for 2020 could be a step in the right direction. However, it will need to continue to be fully effective in the future. Public health, as well as plant and animal life, could depend on reducing blue-green algae. The time to act is now.