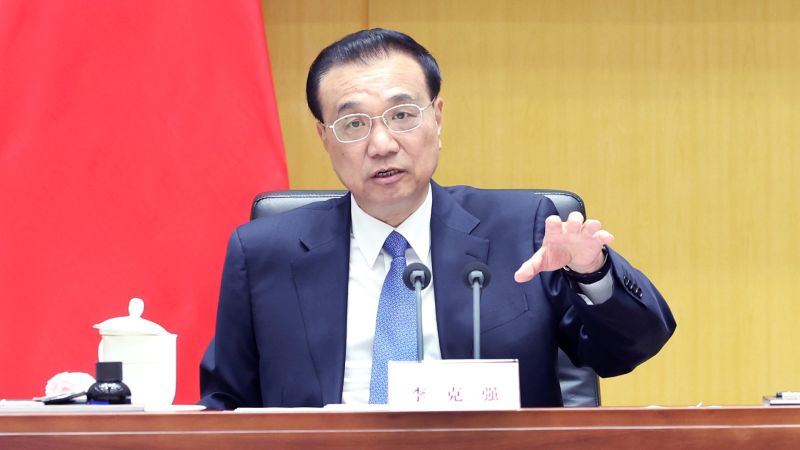 One of China’s top leaders has painted a grim picture of the job market in the world’s most populous nation, as widespread Covid lockdowns slam the brakes on the economy.

Chinese Premier Li Keqiang — the No. 2 in the hierarchy of China’s ruling Communist Party — called the employment situation “complex and grave.”

In a statement on Saturday, he instructed all levels of government to prioritize measures to boost jobs and maintain stability. These measures include helping small businesses survive, supporting the internet economy, providing incentives to encourage people to start their own business, and giving unemployment benefits to laid-off workers.

“Stabilizing employment is critical to people’s livelihood, and is the key support for the economy to run within a reasonable range,” Li said.

His remarks come at a time when the jobless rate in the country has climbed to the highest rate in almost two years, according to data from the government.

Each year, China needs to add millions of new jobs to keep the economy humming. The government has set a target of creating at least 11 million jobs in towns and cities in 2022. But Li said in March that he hopes the economy can generate over 13 million this year, citing the need to accommodate college graduates and rural migrant workers.

Li, who looks after economic management in China, has made repeated calls to stabilize employment in recent weeks, and his comments this weekend are a stark reminder of the cost of China’s Covid restrictions.

As the highly transmissible Omicron variant spreads quickly in China, the country is battling its worst outbreak in more than two years. So far, at least 27 Chinese cities are under full or partial lockdown, which could be impacting up to 185 million residents across the country, according to CNN’s latest calculation.

More than two years into the pandemic, President Ji Xinping is doubling down on his stringent zero-Covid policy even as the rest of the world tries to learn to live with the virus. It involves mandatory mass testing and strict lockdowns.

Xi said on Thursday that China would punish anyone who questions these policies.

The lockdowns have brought the world’s second biggest economy “near breaking point,” according to a recent report by Société Générale analysts.

Most recent data from the government shows that unemployment hit a 21-month high in March, and that was before China extended the lockdown in the financial hub of Shanghai, and enforced tight restrictions in Beijing. The jobless rate in 31 major cities even surged to a record high in March.