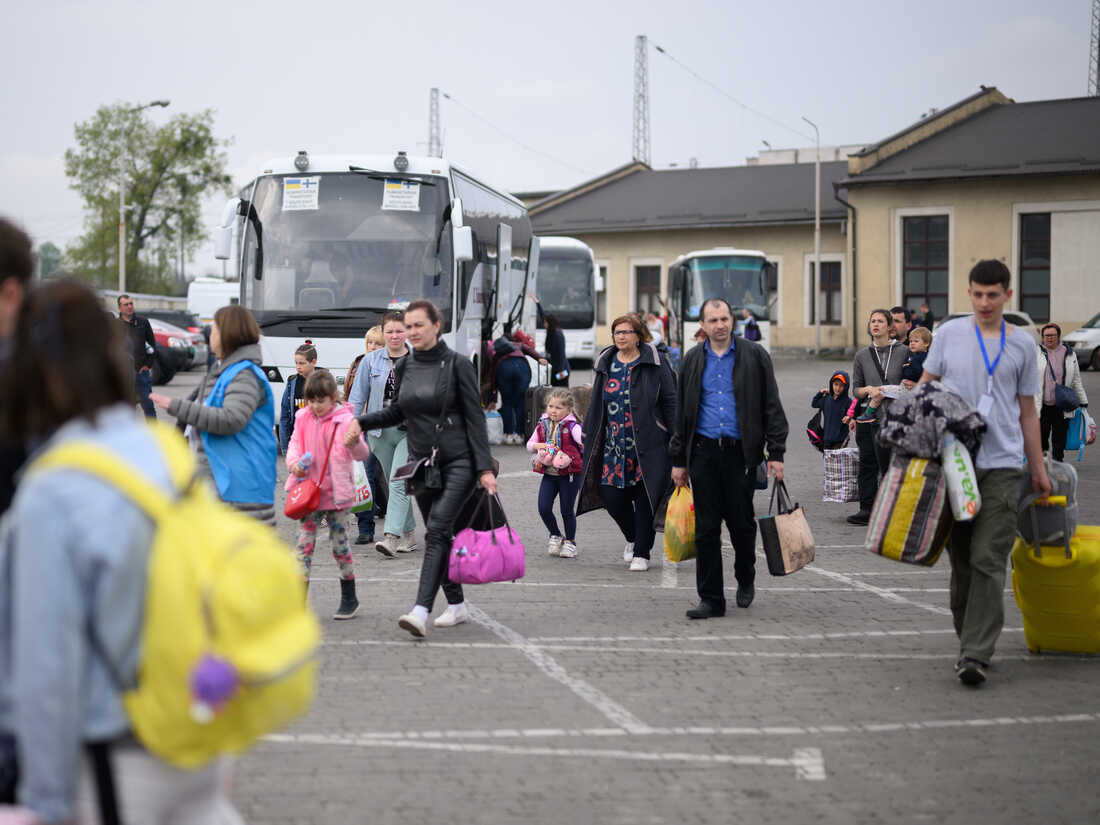 Refugees from war-torn regions of Ukraine board a coach to Warsaw at a coach station on Saturday in Lviv, Ukraine. A U.N. agency estimates that nearly 5 million jobs have been lost in Ukraine since Russia first invaded in late February.

Russia’s invasion of Ukraine has wrought significant destruction and disruption, with millions of people displaced as refugees, thousands of civilians killed and worldwide implications for the supply of necessities like food and energy. Now, new data from a United Nations agency measures the extent of the economic disruption within and beyond Ukraine’s borders.

An estimated 4.8 million jobs have been lost in Ukraine since the start of the war, according to a brief published Wednesday by the International Labour Organization (ILO). And that number could go up or down depending on how the conflict goes. “The study estimates that if hostilities were to escalate employment losses would increase to seven million,” the ILO says. “However, if the fighting was to cease immediately a rapid recovery would be possible, with the return of 3.4 million jobs.”

Some 2.75 million of the more than 5 million refugees who have fled to neighboring countries since February are of working age, the ILO explains. Of them, 43.5% either left or lost the jobs they used to hold. The ILO says the refugee crisis in Ukraine also is creating labor disruptions in the neighboring countries, of Hungary, Moldova, Poland, Romania and Slovakia.

“If the hostilities continue, Ukrainian refugees would be forced to remain in exile longer, putting further pressure on the labor market and social protection systems in these neighboring states and increasing unemployment in many of them,” it explains. Elsewhere, the global sanctions and other economic disruptions affecting Russia are having “significant ripple effects” on Central Asia, the ILO says.

That’s especially true for countries where economies depend on remittances from expatriates working in Russia, including Kazakhstan, Kyrgyzstan, Tajikistan and Uzbekistan. The agency says that Central Asia as a whole will suffer economic losses if those migrant workers return to their countries of origin. The ILO — which in March passed a resolution calling for an end to Russian aggression — stresses that the war is making an impact on markets and labor even outside of the region, by creating a shock to the global economy and further com …