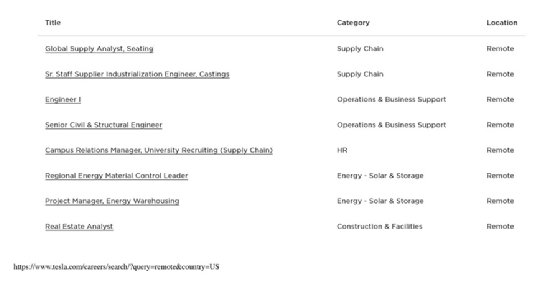 Until Elon Musk, CEO of Tesla Inc., ended remote work this week, the automaker advertised about 100 remote jobs on its career site. But by the end of Wednesday, a search for remote jobs turned up none. Some of the remote job openings now list Austin as the location.

Musk is requiring employees to return to the office, according to a leaked memo titled “Remote work is no longer acceptable.” In the memo, he stated, “Anyone who wishes to do remote work must be in the office for a minimum (and I mean *minimum*) of 40 hours per week or depart Tesla.”
To drive home his point and appearing to confirm the authenticity of the email, Musk tweeted Tuesday: “They should pretend to work somewhere else.” He will make exceptions but said he “will review and approve those exceptions directly.”
This decision to end remote work may be costly to Tesla. Experts and analysts said highly skilled workers put a premium on jobs that offer remote options, and eliminating those options may effect employee retention and recruitment.
And Musk’s opposition to remote work might have been a surprise to Tesla’s HR department.
On Wednesday morning, Tesla’s career website included dozens of jobs that defined the location as “remote,” including jobs in engineering, recruiting, project management, real estate, program management and others. Some jobs specified a hybrid arrangement.
Many remote job openings listed on the site invo …