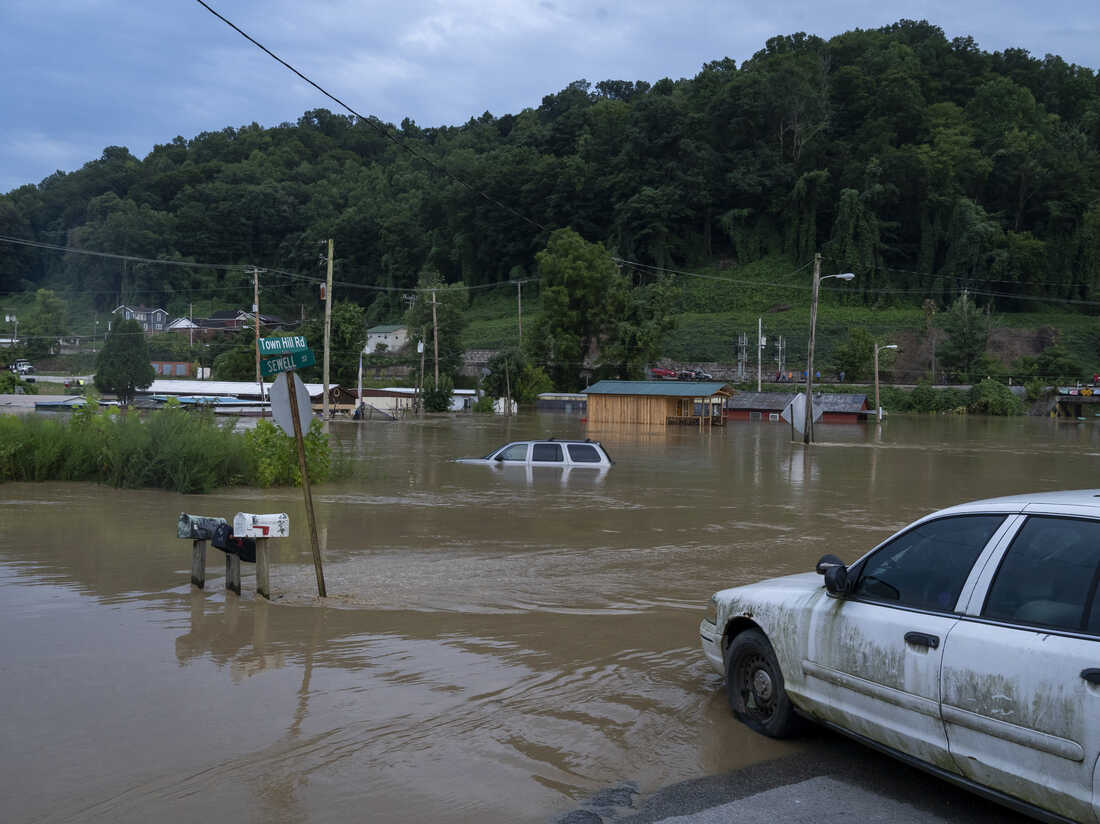 Vehicles after a flood in July 2022 in Jackson, Ky. Deadly floods in the region were caused by very heavy rain.

Climate change means more flood risk across the United States. That includes places far from the ocean and sometimes far from rivers and streams, but where rain storms can still cause dangerous flash floods. Why, exactly, does a hotter Earth mean more inland flood risk? And what does the future hold? This FAQ is for the millions of people who live in increasingly flood-prone parts of the United States, and who want to know how to stay safe and prepare for a changing climate. How does climate change affect heavy rain? It all starts with the release of greenhouse gasses like carbon dioxide and methane. As humans keep burning fossil fuels, the atmosphere gets hotter. That hot air holds more water vapor, and so when it rains, it rains harder. Climate scientists have been predicting for decades that heavy rain would get more common as the Earth heats up. At this point, scientists can measure what’s happening in real time. The amount of rain falling in the heaviest rain storms increased across the country between 1958 and 2016, according to the National Climate Assessment. The situation is most serious in the eastern half of the country. A lot more rain is falling in the Northeast and Midwest, which means a lot more flood risk in all kinds of places, including areas far from the coast.
For every degree (Celsius) of climate change, the amount of water vapor in the atmosphere increases by around 7%. This results in more intense extreme rainfall events almost everywhere as the world warms: https://t.co/NL4j2QU6tI pic.twitter.com/rKBmsDloEY— Zeke Hausfather (@hausfath) August 2, 2022

Why is inland flooding so dangerous? Because floods can happen really quickly, and the water can be powerful when it gets moving. When a lot of rain falls in a short period of time, it doesn’t soak into the ground, especially if the ground is already saturated, or it’s covered with pavement or buildings that aren’t permeable.

All that water has to go somewhere, so it pools on the surface. If there’s a hill – even a very small one – the water starts moving downhill. It gathers power. This is how a flash flood happens, and it can be extremely dangerous. Moving water can tear homes from foundations, destroy roads, fill underground subway stations and wash away cars. This is one reason why floods are consistently the most deadly natural hazard in the U.S. Is there any warning before a flash flood? Often there is some warning. The National Weather Service watches for signs of heavy rain. If a flash flood is possible, the local weather service office will put out a Flash Flood Watch. If a flood is likely, that watch becomes a full-on Flash Flood Warning. People with smartphones generally get an automatic alert when there is a weather warning. It’s important to take those warnings seriously, and especially avoid areas that have flooded in the past or are low-lying. Driving during a flash flood is particularly dangerous. Never drive into moving water, even if it looks shallow. What can be done to protect people from heavy rain? There are many, many ways to warn people that a flood is imminent, slow the water down and give the water safe places to go. For example, if there is less pavement, that helps water soak into the ground. Healthy forests and wetlands also absorb water. Retention ponds are also common, especially near areas with a lot of pavement like highways and parking lots. The ponds are low, marshy areas where excess water can collect.
In cit …